Please ensure Javascript is enabled for purposes of website accessibility
Log In Help Join The Motley Fool
Free Article Join Over 1 Million Premium Members And Get More In-Depth Stock Guidance and Research
By Brian Stoffel - Jan 23, 2016 at 8:50AM

Enrollments continue to grow in the company's after-school tutoring programs.

Three years ago, New Oriental Education (EDU 0.92%) was primarily a provider of English test-prep courses in China. But that business was fading as newer entrants added competition, and the rules surrounding such tests shifted. Led by founder and CEO Michael Yu, the company decided to refocus on K-12 after-school tutoring programs.

After an understandably bumpy transition, the company's earnings this week showed that making that change has been a shrewd move: Revenues and profits are up solidly. And since mid-2012, shares of New Oriental are up over 150%, handily outperforming both the S&P 500 and the Shanghai Composite Index. 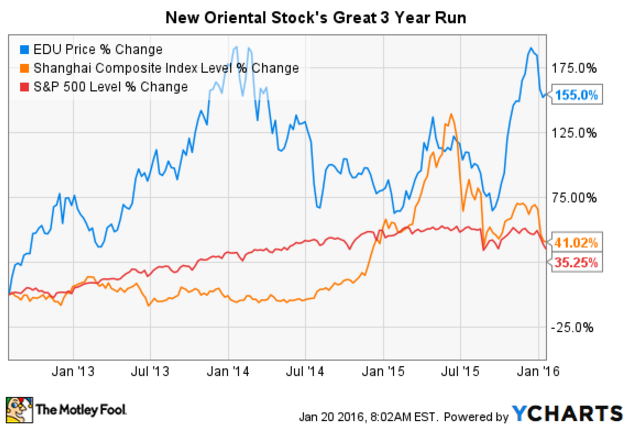 Here's what you need to know about the company's most recent earnings release.

Just the numbers
By almost every metric, New Oriental continues to perform solidly. This helps explain why the stock was up over 10% immediately following the market open on Tuesday -- though it closed up a more modest 3.6%.

It's important to note that while revenue growth was impressive, it actually increased by 22% on a constant-currency basis.

Equally important is the fact that New Oriental's net margins over the past 12 months continue to expand.

Selling and marketing expenses were flat, while general and administrative expenses increased at a faster pace of 23%. Overall, the company's expenses increased 16%, which -- because that was less than its revenue growth of almost 18% -- explains why margins were able to expand once again.

This is important because it demonstrates that management's investments over the previous three years are now paying off.

What management had to say
Comments by Yu reinforce the perception that New Oriental is no longer primarily a test-prep factory, but rather a provider of after-school tutoring -- as it was the latter category that generated almost all of the company's growth.

Of equal importance for investors as they look ahead will be New Oriental's plans for using technology to reach students beyond its physical learning centers. Its online-to-offline strategy (O2O) should be of particular interest. Here's what Yu had to say about it:

"The new O2O education system for our K-12 after-school tutoring business contributed to our revenue growth by improving customer retention rate and bringing in new customers. With these encouraging results, we will continue to invest in building out our O2O education system for overseas and domestic test preparation businesses for the rest of the year. Also, our pure online education platform, Koolearn.com, recorded revenue growth of over 19% year-over-year in the second quarter, with registered users up by over 192% and paid users up by over 215%."

Looking ahead
For the upcoming quarter, management stated that it expects revenue to grow by 14% to 18%. This would represent revenue coming in between $328 million and $339.5 million. Analysts, on average, are expecting the company to bring in $333 million -- slightly lower than the midpoint of management's guidance.

It's important to note, however, that the renminbi's devaluation against the dollar has a negative effect on these estimates. In constant currency, revenue is actually expected to grow by 20% to 24%.

As management's plans continue to play out, investors should keep an eye on enrollment numbers and the continued expansion of net margins.

Brian Stoffel has no position in any stocks mentioned. The Motley Fool recommends New Oriental Education. Try any of our Foolish newsletter services free for 30 days. We Fools may not all hold the same opinions, but we all believe that considering a diverse range of insights makes us better investors. The Motley Fool has a disclosure policy.