Please ensure Javascript is enabled for purposes of website accessibility
Log In Help Join The Motley Fool
Free Article Join Over 1 Million Premium Members And Get More In-Depth Stock Guidance and Research
By Steve Heller - Jan 23, 2016 at 11:00AM

There's a lot of progress to be made between the company correcting its lingering mistakes and 2016 becoming its best year yet.

After a difficult 2015, 3D Systems (DDD -6.38%) has an opportunity to redeem itself in 2016. Last year, the 3D printing company experienced a slowdown in customer spending, a host of execution and quality issues, consistently missed expectations, and the abrupt departure of its CEO of 12 years. All told, the stock lost about 72% of its value in 2015. 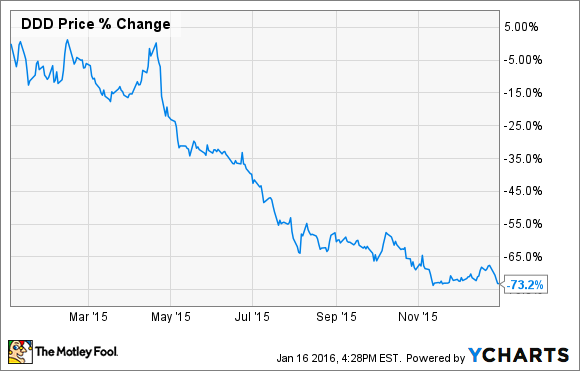 Channeling my inner Bill Barker of Motley Fool Funds, 3D Systems' has an easy act to follow in 2016. Results deemed better than awful may end up delighting investors.

But does having low expectations mean that 2016 will be 3D Systems' best year yet?

Righting all the wrongs
Before we can call 2016 3D Systems' best year yet, the company must right all the wrongs of 2015 -- and then some -- without tripping over itself. This includes:

1. Hiring a new CEO that cleans house
When former CEO Avi Reichental resigned, it created an opportunity for the company to distance itself from his ill-conceived growth strategy, which relied primarily on lots of acquisitions -- more than 50 over a four-year period. Ideally, the new CEO will have credible experience with cleaning up messes, getting a company back on track, and staying disciplined.

2. Improving its operational efficiency
3D Systems' cash conversion cycle, which measures the number of days it takes cash to run through the sales process -- from sitting in the bank, to buying inventory, selling inventory, and collecting payment -- has been steadily on the rise over the last five years. Not only does this show that cash is being reinvested into its business increasingly slower, it also strongly suggests that management hasn't previously made operational efficiency a top priority. 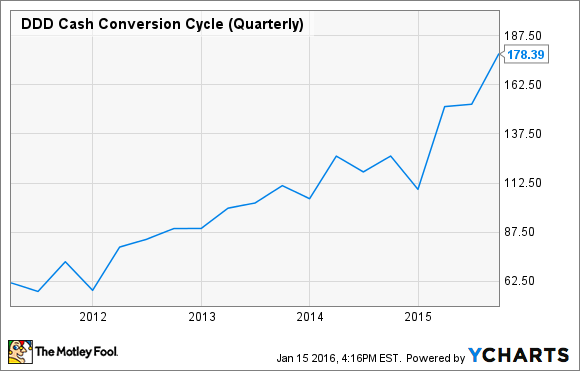 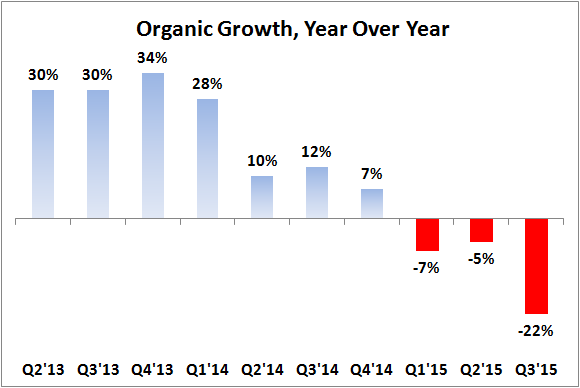 Together, if these metrics improve in 2016, it'll suggest that management is regaining a handle on its operations and improving its execution.

3. An improving customer spending environment
In 2015, both 3D Systems and Stratasys (SSYS -2.33%) experienced a notable slowdown in customer spending across every major industry they serve. Stratasys believes there's currently an oversupply of 3D printing capacity in the marketplace, driven by the unprecedented growth the sector experienced during 2013 and 2014, and it's causing customers to slow down the pace of orders. Of course, if the customer demand picture improves in 2016, which is unknown at this time, it'll likely benefit 3D Systems and Stratasys.

4. Introducing faster 3D printers
The 3D printing industry is about to get more competitive for 3D Systems. Well-funded entrants like HP and Carbon3D are excepted to enter the marketplace this year with proprietary technologies that are anywhere from 10 to 100 times faster than leading technologies on the market today. The risk is that these new technologies make 3D Systems' portfolio appear inferior. 3D Systems' best line of defense here is to refresh its portfolio with faster, more competitive 3D printers.

5. Muted competitive pressures
Along similar lines as No. 4, it's possible that the fear of increased competition doesn't significantly affect 3D Systems' business. After all, 3D Systems' portfolio consists of seven different 3D printing technologies, making it the most diversified 3D printing company in the world. The most threatening new competition that expected to enter the market this year is focused exclusively on plastic-based technologies, which represents only a portion of 3D Systems' total business. In other words, the overall impact that this new competition may have on 3D Systems' business could be muted.

A long road ahead
There's a lot of progress to be made between 3D Systems correcting its lingering mistakes and 2016 becoming its best year yet. To be fair, some of the areas outlined above that would help 2016 become its best year yet are external factors, which are largely out of the company's control.

However, any meaningful sign of improvement in areas that are in management's control would be an encouraging development for investors. Considering 3D Systems has an easy act to follow in 2016, a small improvement could greatly boost shareholder prospects, whether 2016 is the company's best year yet or not.