Slower growth and a lack of price increases for the iPhone line means gains in Apple's profit margin won't come as easily.

During 2014 and 2015, Apple (AAPL 0.99%) was firing on all cylinders as measured by almost any metric. Soaring revenue drove net income higher, and EPS was leveraged even further by the company's share repurchase program. But what was particularly impressive about Apple's rapid growth during this period was its improving gross profit margin. Driven by scale, improving cost curves, and higher prices, Apple's meaty gross profit margin is one of the company's greatest strengths.

But will Apple's gross profit margin face pressure in 2016?

Apple's gross profit margin history
Before we look forward into 2016, let's look back. Analysis of Apple's recent gross profit margin trends provides insight into the underlying drivers for the metric and gives investors a better idea of its opportunities and threats.

Just a few years ago, the narrative surrounding Apple's gross profit margin wasn't nearly as positive as it is today. After peaking in the second quarter of 2012 at above 47%, the introduction of an iPad mini and a completely redesigned iPhone with the iPhone 5, along with a high number of product launches across almost every category in a short period of time, put pressure on margins. This lower-priced iPad in the iPad Mini, paired with higher product costs, sent the company's quarterly gross profit margin all the way down to 38% -- or about 900 basis points lower.

At this point, investors were concerned that the proliferation of cheaper Android devices would erode Apple's pricing power, and the market seemed to treat the company's falling gross profit margin as proof that this storyline was bound to play out.

Apple's stock fell right along with its gross profit margin. 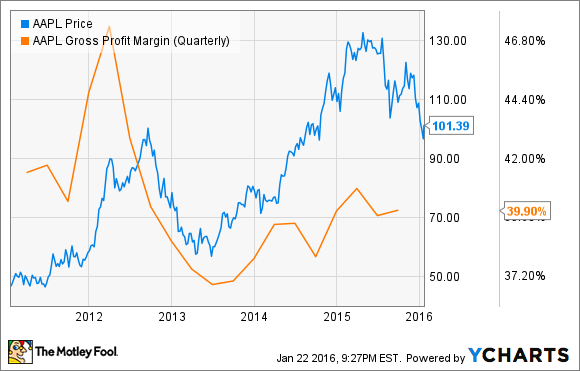 But it turned out that Apple's pricing power was stronger than the market thought. The company's gross profit margin bottomed out around 37%, and prices for Apple's iPhone, which represented over half of Apple's revenue, never came down. Going further, Apple proceeded to introduce higher-priced, higher-margin iPhones -- and customers paid up.

In 2014, when Apple introduced the iPhone 6 line, not only did Apple introduce a higher-end iPhone model in its iPhone 6 Plus, with a starting price $100 higher than previous starting prices for new iPhones, but the company also introduced a higher storage tier. These new pricing tiers pushing the highest priced iPhone all the way to $949 -- $200 higher than the highest priced iPhones for previous launches.

Apple's year-over-year comparisons for its gross profit margin in 2016 probably won't be as favorable as they were in 2016. Indeed, investors shouldn't be surprised if comparisons throughout the year level off. Not only is the company up against stronger comparisons in 2016 than it was in 2015, but there's also been no increase in the price of the company's phones this year, and slowing revenue growth means scale benefits won't come as easily.

Investors will get their first preview of Apple's fiscal 2016 gross profit margin comparisons on Tuesday, when the company reports quarterly results. Apple is guiding for a gross margin between 38.5% and 39.5%. In the year-ago quarter Apple's gross profit margin was 37.9%.