Please ensure Javascript is enabled for purposes of website accessibility
Log In Help Join The Motley Fool
Free Article Join Over 1 Million Premium Members And Get More In-Depth Stock Guidance and Research
By Timothy Green, Matthew DiLallo, and Brian Feroldi – Jan 24, 2016 at 7:51AM

Some stocks are just plain awful. Here are three that investors shouldn't touch with a 10-foot pole.

There's nothing more dangerous for investors than being overly optimistic about a lackluster company. A bull argument can be constructed for any stock, but ignoring the risks can be catastrophic. Everyone likes to buy great companies at low prices, but it's all too easy to cherry-pick data, consciously or unconsciously, tricking yourself into buying shares of a terrible company.

A few of our Foolish contributors have identified three stocks that fall into this category -- ones that should be avoided at all costs.

Tim Green: I've never quite understood the investment thesis for Internet radio company Pandora (P). The company pays a royalty for each song it plays, and it makes money through both advertising and subscriptions. But Pandora has essentially no control over how much it pays per song, with rates set by the Copyright Royalty Board. Those rates were recently increased, and given that Pandora has never turned a profit in the past, it's difficult to imagine how it will turn a profit in the future.

I'd avoid Pandora for this reason. The company may be the most popular music streaming service, but it's not hard to become popular when you're essentially selling a dollar for $0.90. During the first nine months of 2015, content acquisition costs totaled 56% of Pandora's revenue. The company has so far failed to better monetize its service, and with higher royalty costs in the future, I just can't find any reason to be optimistic about Pandora as an investment. During the first nine months of 2015, the company posted a $150 million net loss, far worse than the $42 million net loss reported in the prior-year period.

Pandora has also been blowing money on expensive acquisitions. In October, Pandora spent $450 million in cash and stock on Ticketfly, a company that sells tickets to events online. You could argue that this acquisition makes sense strategically, but with Ticketfly recording $500 million in transaction volume in 2014, taking a cut of that as revenue, Pandora is likely paying a high-single-digit multiple of sales, assuming Ticketfly grew in 2015. This acquisition seems like a case of management taking action for the sake of taking action.

With a business model that appears unlikely to ever produce meaningful, sustainable profits, Pandora is a stock to avoid at all costs.

Brian Feroldi: Investing in small-cap biopharmaceutical companies is risky even when everything goes according to plan, but when a company finds a way to anger both its marketing partner and the FDA at the same time, I'd suggest keeping far away.

That situation happened early last year to Orexigen Therapeutics (NASDAQ: OREX), a biopharmaceutical company focused on treating obesity. The company released early data related to the long-term cardiovascular outcomes trial of its obesity drug Contrave, stating that patients who used the drug showed a 41% reduction in the risk of death. While that sounds like a great result, that data point was only based on a quarter of the defined analysis of the study. Additional data from the same study showed that Contrave actually offered no statistically significant advantage.

The FDA deemed the early data release misleading to patients and said that the study wouldn't satisfy its post-marketing requirements. Another trial would have to be completed -- estimated to cost $210 million -- and new data won't be available until 2022. Orexigen marketing partner Takeda Pharmaceuticals was less than thrilled with the news, which greatly strained the two companies' relationship.

Over time, Orexigen Therapeutics might be able regain the trust of the FDA, and Contrave could become a winning drug, but given the company's spotty history, I'd suggest avoiding this company for the time being.

Matt DiLallo: I'd steer clear of Chesapeake Energy (CHKA.Q). In less than a year, the company managed to burn through more than $1 billion in cash drilling wells that, frankly, were not necessary. With the market oversaturated with oil and gas, there was no reason for Chesapeake Energy to vastly outspend its cash flow in order to grow production. 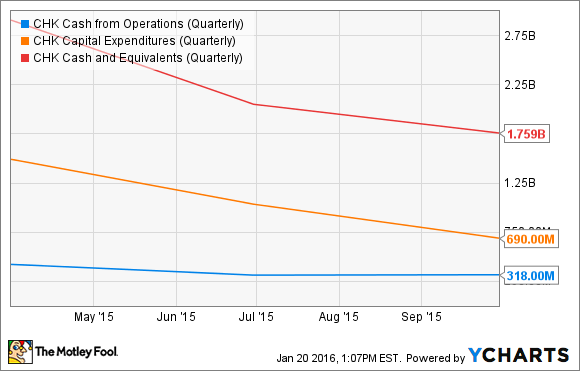 It said it was doing so because it could still earn an economic return on the wells it was drilling, but by pushing more production into the market, it was part of the problem, leading to even more downward pressure on commodity prices. That price weakness ate into the economic return the company thought it would be earning.

Further, burning through the bulk of its cash put even more pressure on its balance sheet. In fact, an analyst at Citi said the company's leverage is unsustainable, and that a default was on the horizon. This situation has forced it to take some rather drastic actions, including a debt exchange, which didn't go over well. Not only was it viewed as a distressed exchange by its credit rating agency, but it failed its primary endpoint to extend its near-term debt maturities.

Chesapeake Energy's current operations and debt level are unsustainable at current commodity prices. As such, an investment in Chesapeake is a rather bold bet that those prices will rebound sharply. While that might happen, it also might not. That's why it's best to avoid Chesapeake right now.