Please ensure Javascript is enabled for purposes of website accessibility
Log In Help Join The Motley Fool
Free Article Join Over 1 Million Premium Members And Get More In-Depth Stock Guidance and Research
By Scott Levine - Jan 24, 2016 at 8:45AM

A Fool is nothing without the courage of his convictions.

The new year is only a few weeks old, and I'm intent on keeping at least one resolution: reorganizing my retirement accounts. So I'll be opening positions in Pattern Energy Group (NASDAQ: PEGI) and General Electric (NYSE: GE) in my Roth IRA to gain some exposure to the wind industry. I've been bullish on wind for some time, but I've never heeded my own advice. That's about to change.

Despite plummeting fossil-fuel prices, the wind industry is flourishing. In 2015, wind power totaled 47% of new electric generating capacity in the United States; gas came in second place at 35%. Regarding expense, the cost of wind power has dropped 66% since 2009, making it cost-competitive with traditional fuel sources in some domestic markets. Industry experts expect the growing adoption of wind power to continue -- just another reason I'm comfortable with this as a 30-year investment.

To Roth or not to Roth
There are a number of strategies to choose from when planning for retirement. One of the best, though, is the Roth IRA. Funding the account with after-tax dollars, you enjoy tax-free withdrawals on the principal and earnings in retirement. I (and many others) therefore believe that quality, dividend-paying companies are excellent choices for this type of account.

And for those willing to take on more risk, yieldcos offer a compelling argument for inclusion in a Roth. Yieldcos are required to pay out a majority of their income to shareholders to receive preferential tax treatment, making them a good choice for a tax-advantaged account such as a Roth. As those dividends roll in, investors can reinvest and continue to pick up more shares. With the lucrative power of compounding, those golden years can become a little more lustrous.

In a holding pattern
With that out of the way, let's look at the two companies. Pattern Energy is an independent power company that sells to a variety of takers that, I believe, will increasingly opt for wind-generated electricity. Utilities, for example, are adopting more renewables as they strive to comply with the Clean Power Plan. Companies reliant on cloud services are increasingly turning to wind power to operate their data centers. For example, Pattern Energy signed a 13-year power purchase agreement with Amazon.com for 100% of the expected output from a wind farm under construction in Indiana. The facility will help power data centers for Amazon Web Services.

More importantly, comparing the same time periods, the company's cash available for distribution (CAFD) increased 33%, exceeding both the revenue and adjusted EBITDA growth rates. An important metric to watch, CAFD helps to indicate how responsibly the company is returning cash to shareholders -- raising the dividend while reporting lower CAFD, for example, would be a red flag. Management states that it has a target payout ratio of 80%, but a payout ratio that meets or exceeds CAFD growth would be another red flag. Should the company report $84 million in CAFD for 2015 -- the middle of its guidance range -- it would equal an 88% increase over the $45 million it reported in 2014.

In general, a good move
Unlike Pattern Energy, which is more or less a pure play on wind, GE is an industrials giant for which wind is not the dominant revenue source. Of the $149 billion that GE reported in revenue for 2014, renewable energy -- primarily composed of the company's wind business -- accounted for $1.23 billion. Nonetheless, the company is an industry leader when it comes to manufacturing turbines and providing support services. According to Navigant Research, GE was the third largest global supplier of wind turbines in 2014, and with the $10.3 billion acquisition of Alstom, GE is increasing its turbine offerings -- namely, in offshore wind. 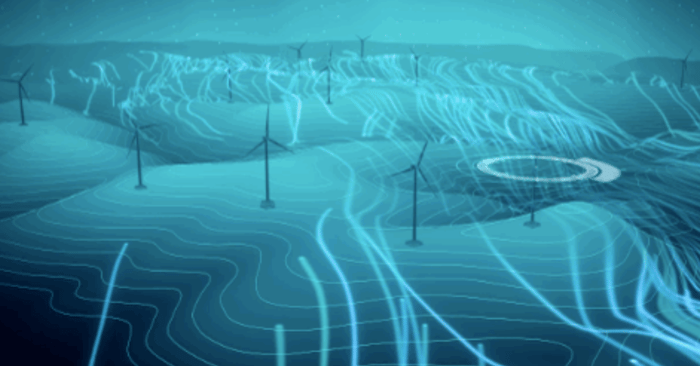 In fact, GE is making history via Alstom; five of Alstom's turbines will comprise America's first offshore wind farm. But GE's wind opportunity is much greater than just manufacturing turbines.

In 2015, GE launched GE Digital, featuring Predix, the company's cloud-based software platform, which provides the foundation for the Digital Wind Farm -- the company's solution to optimize the construction and performance of wind farms. The company estimates that the solution can increase wind-farm energy production by as much as 20%, making it attractive to wind developers and operators. The Digital Wind Farm is just one example of the company's Industrial Internet solutions, which management believes "could add $10 [trillion] to $15 trillion to global GDP in efficiency gains over the next two decades."

The takeaway
As investors, Fools look to act responsibly -- buying quality companies and holding them for the long term. I'm looking to do the same with wind-power industries, and I believe that Pattern Energy, as a wind-farm owner and operator, and GE, as a turbine manufacturer and solutions provider, are two lucrative opportunities. Maybe reviewing your retirement portfolios was a new year's resolution as well. If so, make a date to do it. Breaking out in another verse of "Auld Lang Syne" is optional.