The insurance company's new merger gives it access to an even longer history of dividend excellence.

The insurance industry has produced some long-term success stories for shareholders, and some insurers have done a particularly good job of using dividends to share their success. ACE Limited (NYSE: CB) is one such insurer, having put together a 22-year track record of raising its dividends annually. Now that it has completed its merger with Chubb, ACE arguably has an even more impressive dividend pedigree given Chubb's status as a Dividend Aristocrat. Let's look more closely at ACE Limited to see whether investors should expect a dividend increase in 2016.

How ACE became a great dividend stock
ACE Limited has had a remarkably consistent history of raising its dividends at a steady pace over time. During most of the 1990s and 2000s, investors could count on ACE to deliver annual dividend growth in a range of roughly 10% to 25%, and between 1994 and 2007, the company's dividend jumped more than eightfold.

After the financial crisis, ACE's dividend growth slowed down temporarily in response to tough conditions in the insurance industry. Bad loss experience stemming from some catastrophic events contributed to the pressure on ACE's earnings and dividends. But by 2012, ACE felt comfortable enough to give investors a big dividend increase of more than a third, and a 24% hike at the beginning of 2014 also helped to bring the company's payout into line with the industry. The result has been that ACE has doubled its dividend in just the past five years. 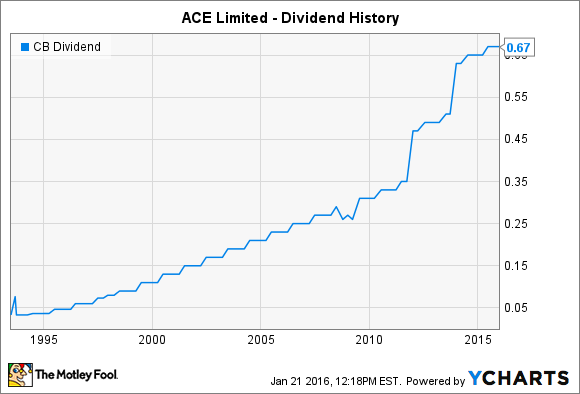 As impressive as ACE Limited's dividend history is, the move it made to acquire Chubb promises to generate even more interest from investors. Chubb had a 33-year history of raising its annual dividend every year, and the stock was one of just a few dozen members of the prestigious Dividend Aristocrats list. The $29 billion deal announced last summer finally closed earlier this month, and the company will move forward using the Chubb brand. Yet ACE shareholders will be the ones left unaffected by the merger, and Chubb shareholders had to trade their shares in, receiving $62.93 in cash plus 0.6019 ACE shares for every Chubb share they owned.

Particularly important for dividend investors is the fact that ACE expects the transaction to add to its earnings per share and book value immediately. That opens the door to further dividend increases without necessarily having to undergo a waiting period while the two companies seek to integrate their operations. The announcement in July didn't make specific reference to dividends, but it did identify attractive opportunities to complement each other's business strengths and eventually restore faster growth to the overall operation.

When will ACE Limited raise its dividend?
What's unclear about the merger is what impact it will have on the timing of dividend increases. Former Chubb shareholders would have expected a dividend hike to take effect during the first quarter of the year, and they haven't had a boost since last March. By contrast, ACE has more frequently made its increases at midyear, and so given that ACE is the surviving corporate entity, there's an argument that investors should expect a hike in the summer.

Given both companies' track records, few investors expect any break in the streak of consecutive rising dividends in 2016. As long as the merger goes well, the question isn't whether a dividend increase will happen, but rather when shareholders will see their quarterly checks go up.