Please ensure Javascript is enabled for purposes of website accessibility
Log In Help Join The Motley Fool
Free Article Join Over 1 Million Premium Members And Get More In-Depth Stock Guidance and Research
By Leo Sun - Jan 24, 2016 at 9:51AM

Should investors expect the cruise ship operator to share its wealth this year?

Many investors might consider cruise ship operator's Royal Caribbean's (RCL 0.56%) 1.8% dividend to be too paltry to mention. After all, its main rival Carnival (CCL 0.72%) pays a 2.4% yield, while the S&P 500 currently has an average yield of 2.3%. Nonetheless, investors interested in buying Royal Caribbean to capitalize on low oil prices and Chinese tourism should understand the history of its dividend, its sustainability, and the prospects of future increases.

On an EPS basis, Royal paid out 50% of its earnings per share over the past year, while Carnival paid out 58%. While Carnival's higher yield and payout ratio make it look more generous, it also means that Royal Caribbean has slightly more room to raise its dividend.

Inconsistent dividend increases
Royal Caribbean started paying a dividend when it went public in 1993. It initially raised that dividend consistently, but its quarterly dividend was stuck at $0.13 from 2000 to 2005 before being raised to $0.15. It remained at $0.15 until 2008, when it was suspended during the financial crisis. Royal brought back a $0.10 quarterly dividend in 2011 and has raised it every year since then. 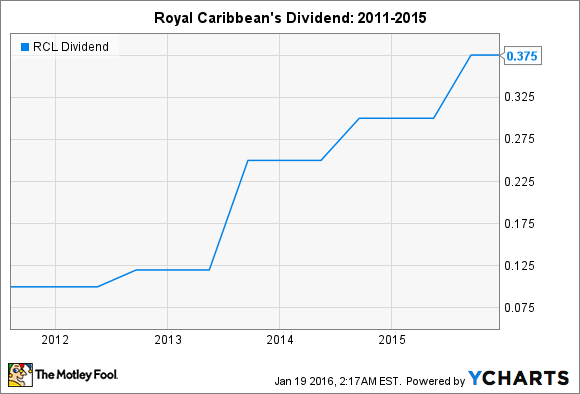 Back in 2014, Royal Caribbean introduced its "double-double" plan to raise its return on invested capital from 3.4% today to the double digits, while doubling its 2014 EPS of $3.39 by 2017. Lower fuel costs and streamlined fleets could help Royal achieve that goal ahead of schedule. After posting 42% growth this year, analysts expect its earnings to rise another 30% to $6.23 per share in fiscal 2016.

Carnival clearly benefited more from low fuel costs than Royal Caribbean last quarter, because of differences in fuel hedging. However, Carnival's revenue still fell 0.3% annually, because of lower ticket sales, which were partially offset by higher onboard revenues from food, drinks, and services. Royal's revenues rose 5%, thanks to growth in both ticket purchases and onboard revenues. Both companies are also relying heavily on expansions in China to boost their top-line growth. Royal Caribbean expects China to account for 9% of its total capacity in 2016, compared with 6% in 2015.

But mind the risks
Royal Caribbean's near-term outlook looks positive, but investors should remember that its top-line growth depends on China, and its bottom-line growth is supported by cheap oil. If demand in China dips because of economic turmoil, or oil prices unexpectedly spike on regional conflicts or OPEC action, both catalysts could fade. Nonetheless, Royal Caribbean will probably raise its dividend in 2016 to keep pace with its earnings growth. While that increase won't attract serious income investors, it could be a nice bonus for current investors.