Please ensure Javascript is enabled for purposes of website accessibility
Log In Help Join The Motley Fool
Free Article Join Over 1 Million Premium Members And Get More In-Depth Stock Guidance and Research
By Ted Cooper - Jan 25, 2016 at 8:44AM

Here's why you should think twice before making a contrarian bet on these casino stocks.

One of Warren Buffett's favorite maxims is "Be fearful when others are greedy and greedy when others are fearful." That seems to be the investment rationale for some contrarians investing in casino stocks with exposure to Macau. As short interest remains near 52-week highs for stocks such as Las Vegas Sands (LVS 2.60%), MGM Resorts International (MGM 1.98%), Wynn Resorts (WYNN 1.73%), and Melco Crown Entertainment (MLCO 0.76%), it's tempting for value investors to bet big thinking the worst is already priced in. Recent history, however, suggests that caution is the better course.

"The market's about to turn!"
Despite the carnage in Macau over the past 18 months -- or perhaps because of it -- analysts and industry insiders find cause for optimism in the year ahead.

"We are at the beginning of the shift in the cycle from a recession-type economy to a bottoming out, and I think the economy and Macau's fortunes will turn around," said Las Vegas Sands CEO Sheldon Adelson during a press conference earlier this month.

However, industry observers have insisted for several quarters that the Macau market would surely recover soon -- a prediction that has yet to play out. Casino stocks have made several brief rallies over the past two years, only to find new lows months later as Macau's recovery proved elusive. 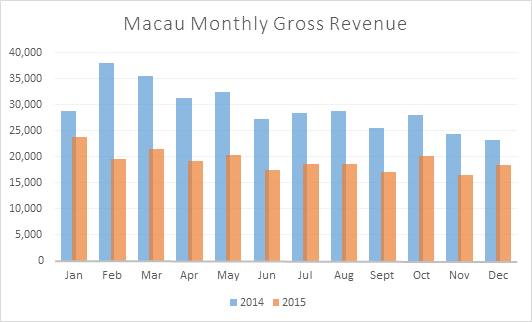 You can't blame investors for being fooled so many times, though. The biggest obstacle to a Macau recovery is unpredictable Chinese government policy. Steve Wynn, CEO of Wynn Resorts, has publicly grumbled about the lack of clarity in regulatory policy.

"It's become a major issue in Macau as to the impact of government policy on and planning for employment, promotions, hiring, and compensation," Wynn complained. "None of us are really clear on what our environment is going to be like going forward."

Macau's recovery is not guaranteed. Government anti-corruption initiatives could permanently deprive Macau of its once-vibrant VIP gambling business, thereby removing a key source of revenue from the market. More troubling, however, is that Macau's prior success has encouraged neighboring Asian markets to open up to casino development. Mongolia is just the latest country to take steps toward approving new casino construction, reports InfoMongolia.com. Moreover, if rumors prove true that China plans to build its own Macau on the mainland, Macau would be decimated.

What it means for casino stocks
The enormous uncertainties in Macau create a perilous investing environment. Obviously, the best case is that Macau recovers in 2016 and casino stocks return to higher valuations. However, some casino stocks are better protected than others in the event that Macau continues to struggle.

Judging by percentage of profits derived from Macau, Melco Crown and Wynn Resorts have the most to gain -- and the most to lose -- based on Macau's performance. Even after a sharp downturn in Macau earnings, Wynn's resorts in the region account for 61% of total company EBITDA. Melco Crown derives substantially all of its business from Macau. 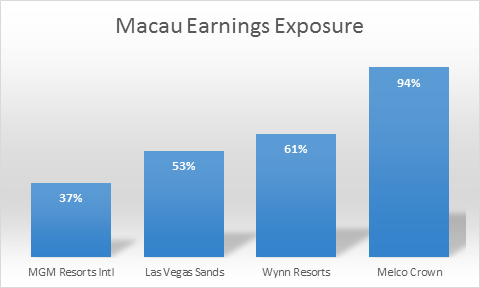 Wynn caters primarily to the VIP segment, which has borne the brunt of the government's actions to curb corruption and money laundering. The company's earnings may not recover even if the Macau mass market enjoys a resurgence in 2016.

Melco Crown is better positioned to participate in a Macau recovery because it focuses on the mass market, which is not constrained by the government crackdown. Melco's latest casino project, Studio City, opened to the public last October. Studio City focuses on the mass market with non-gambling attractions such as Asia's tallest Ferris wheel and a live performance venue. However, its nearly complete reliance on Macau makes Melco Crown a risky bet in case a recovery remains elusive in 2016.

On the other hand, MGM Resorts is less exposed to Macau than its U.S.-listed competitors are. Though the company generates most of its profit at U.S. casinos, the company's weak position in Macau puts a sizable minority of its profit at risk. MGM's first casino on the attractive Cotai Strip won't open until the tail end of 2016, placing it behind its main rivals. Even if Macau recovers, MGM's poor competitive position could lead to further erosion of its Macau profits.

Finally, Las Vegas Sands is widely considered to be a safer bet than its competitors, as it has a stronghold in the mass and non-gambling markets on the Cotai Strip. With the crackdown on corruption crimping the VIP segment, Las Vegas Sands is focused on the markets that have the brightest future in Macau.

Moreover, almost half of Las Vegas Sands' profits are generated in the U.S., giving the company diversification from the uncertain Macau market. However, with the company at 15 times analysts' estimates of 2016 earnings, the market is already pricing in a stable earnings base that may not materialize.

The company earned $1.88 per share through the first three quarters of 2015, compared with $2.62 at the same point in 2014. Earnings will have to stabilize just to justify the 15 earnings multiple, and Macau will probably have to grow for Las Vegas Sands' investors to get a satisfactory return.

The bull case for each of these stocks assumes that Macau will return to growth sometime in the coming quarters -- an assumption that has yet to prove accurate. Contrarian investors may want to wait for some hint of positive news to come out of Macau rather than try to catch a falling knife.

Ted Cooper has no position in any stocks mentioned. The Motley Fool has no position in any of the stocks mentioned. Try any of our Foolish newsletter services free for 30 days. We Fools may not all hold the same opinions, but we all believe that considering a diverse range of insights makes us better investors. The Motley Fool has a disclosure policy.