Priceline is being hurt by economic conditions in 2016, but the company is still a remarkably strong business trading at attractive valuation levels. 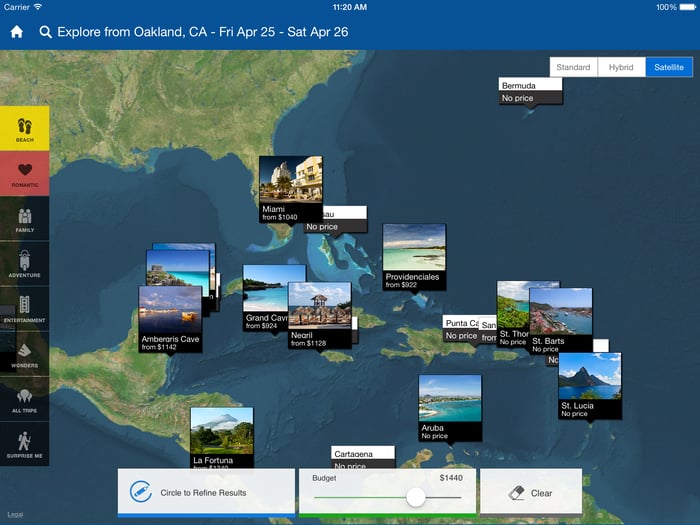 Investors in Priceline Group (BKNG 2.77%) are feeling a lot of pain lately. Shares of the online travel leader are down by more than 25% from last year's high because of growing concerns about macroeconomic headwinds in 2016.

Global economic turmoil could certainly affect Priceline in the coming quarters, but the company is still a fundamentally solid business with promising prospects over the long term. Let's take a look at Priceline stock and what it can offer investors in 2016 and beyond.

A compelling business
Priceline is the global leader in online travel services, which includes all the companies that provide access to hotel bookings, flights, and car rentals via Web and mobile applications. Competitor Expedia (EXPE 3.07%) is much bigger than Priceline in the U.S., but Priceline is well ahead of Expedia in Europe and Asia. Based on data for the third quarter of 2015, Priceline makes 88.4% of its gross bookings overseas, while Expedia makes only 38% of its bookings in international markets.

Priceline is also larger than Expedia in terms of revenue, although the two companies aren't too far away from each other. Wall Street analysts are on average expecting $10.6 billion in revenue from Priceline and $8.6 billion in sales from Expedia during 2016. Priceline's main platform, Booking.com, has 820,000 unique properties offering 21 million bookable rooms worldwide, and it has already accommodated over 1 billion guests since inception.

Priceline is the top player in an industry in which scale is a crucial advantage. Both travelers and industry operators want to join the platform, offering more opportunities for business and better deals, and a bigger platform means also a more valuable service to users on both side of the transaction.

Global exposure is a major advantage for Priceline in the long term. Europe is a big destination for travelers from all over the world, and emerging markets should provide exceptional opportunities for expansion in countries where online travel agencies are just getting started. However, global currencies have been depreciating sharply versus the U.S. dollar lately, and this trend is hurting Priceline's financial performance when expressed in U.S. dollars.

Doing well in a challenging environment
Priceline isn't immune to currency headwinds, but the business is still performing strongly when leaving currency considerations aside. Gross travel bookings were $14.8 billion during the third quarter, a 7% year-over-year increase. Performance was much stronger when looking at the numbers in currency-adjusted terms, as gross travel bookings in constant currency grew 22% versus the third quarter in 2014. Customers booked 115.6 million hotel room nights during the quarter, a nice 22% year-over-year increase.

Priceline operates mostly under the agency business model. It acst as an intermediary between buyers and sellers and makes a commission on every transaction, as opposed to buying hotel room inventory and then reselling it to customers. This approach means that Priceline assumes almost no inventory risk, and the company retains most of its revenue as gross profit. The company reported a 12% increase in gross profit last quarter, while gross profit in constant currency jumped by a strong 29% versus the third quarter of 2014.

Even a mediocre company can do well with the wind at its back, but Priceline is proving that it can deliver rock-solid financial performance during challenging economic conditions, and this performance speaks wonders about the company and its business model.

The bad news is that 2016 is looking like a volatile year so far. Most global currencies keep depreciating against the U.S. dollar, and this trend will inevitably weigh on Priceline's financial figures. However, this risk is already incorporated into valuation to a good degree.

Priceline stock is trading at a forward price-to-earnings ratio of around 16, a small discount versus the average company in the S&P 500 index, which trades at a forward P/E in the neighborhood of 17. Considering the company's attractive growth prospects and profitable business model, current valuation looks like an opportunity for long-term investors who can tolerate the short-term uncertainty.

It looks as though 2016 will be an interesting year for Priceline. Economic turmoil can certainly hurt the company's performance over time, but external conditions come and go. The main point is that Priceline is still a fundamentally strong business trading at attractive valuation levels, so the lower the stock goes, the bigger the opportunity for long-term investors.