As I write this, the S&P 500 is down by about 7.5% so far in 2016, while Warren Buffett's Berkshire Hathaway (NYSE:BRK.B) (NYSE:BRK.A) has fallen by about two-thirds of that amount thanks to Berkshire's correction-resistant portfolio of stocks and subsidiaries. This may not sound like a big deal, but strong performance when the market falls is one of Buffett's keys to long-term success. Here's why Buffett is beating the market, and why it's so important to beat the market during the bad times. 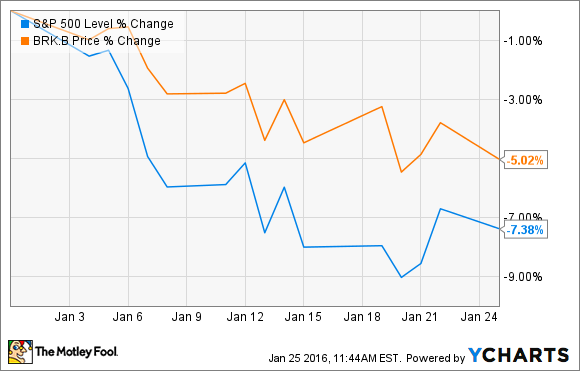 Buffett's investments have a long history of beating the market during corrections and crashes. From 1965 to 2014, the S&P 500 had 11 losing years, and Berkshire's stock price outperformed the market in nine of them. This can be attributed to certain crash-resistant features Buffett looks for when making an investment.

As an example, consider Coca-Cola (NYSE:KO), which has been one of Buffett's largest stock holdings for many years. The company has an easily manageable debt load -- in 2014, the company's operating profit was $9.7 billion, while the interest expense on its debt was less than $0.5 billion. This leaves a lot of cushion to absorb an economic crisis and remain profitable.

Coca-Cola definitely has a wide moat. Its brand name gives it pricing power (this is why we'll pay more for a Diet Coke than a generic brand), and its scale allows for efficient operations and global diversity. While sugary sodas are admittedly losing popularity, the food production business is timeless, and Coca-Cola has shown a willingness to adapt to changing consumer trends.

Buffett has said that a "ham sandwich could run Coca-Cola," meaning the business essentially runs itself, no matter what the stock market or economy is doing. The same could be said about many of Berkshire's other stocks and subsidiaries.

Why it matters
To illustrate why it's so important to invest defensively and outperform the market during the bad times, let's consider the six-year period from 1999 through 2004. Take a look at the performance of the S&P 500 and Berkshire Hathaway in these years.

First, notice how the S&P 500 had three years of double-digit gains in this time period, and Berkshire Hathaway underperformed the index significantly in each one. It's easy to understand why -- 1999 saw the rise of dot.com stocks and Berkshire didn't own any. In 2003 and 2004 when the tech survivors began to rebound, Berkshire was unable to ride the momentum.

Also notice how during the S&P's three negative years, Berkshire not only outperformed, but managed to gain value in two of the three. While Berkshire didn't have a tech-heavy portfolio that was capable of producing massive gains each year, it managed to avoid the losses by investing in businesses that make money no matter what.

So, at first glance, this may sound like a pretty even situation -- three years of underperformance and three years of outperformance. However, you may be surprised to learn that over the six year period, Berkshire gained 26% while the S&P only managed to return 7.9%. That's why it's so important to play defense. 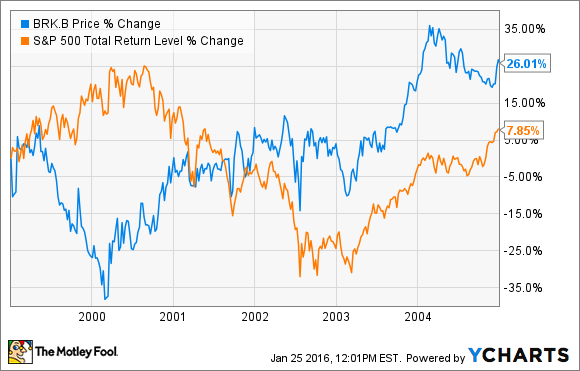 The moral of the story
If you look at Berkshire's stock portfolio, the vast majority of the names you see can be described as defensive investments. The point I want to make is that "defensive" should not be confused with "boring." Stocks such as Wells Fargo and Coca-Cola may not seem like the most exciting investments, but I think we can all agree that getting rich is exciting, and a portfolio of Buffett-style defensive stocks can help you do just that.