Please ensure Javascript is enabled for purposes of website accessibility
Log In Help Join The Motley Fool
Free Article Join Over 1 Million Premium Members And Get More In-Depth Stock Guidance and Research
By Adam Levine-Weinberg - Jan 26, 2016 at 9:45AM

Eventually, the struggling retailer will run out of assets it can sell to pay the bills.

Sears Holdings (SHLDQ) has posted an unending string of sales declines and losses over the past five years. Despite this consistently poor performance, Sears has managed to stay afloat by selling and spinning off a variety of subsidiaries to generate cash. 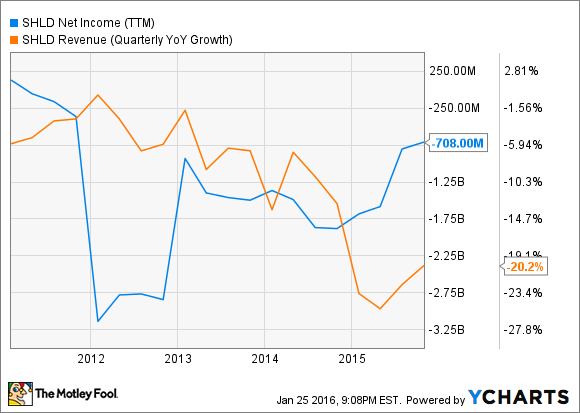 However, Sears may have only a few years left. After spinning off Seritage Growth Properties (SRG 9.56%) in 2015 as a REIT owning 235 Sears properties (and holding joint venture stakes in 31 others), Sears may be running out of big cash-raising opportunities.

Meanwhile, the improved performance of J.C. Penney (JCPN.Q) -- Sears' biggest mall-based competitor -- will add to Sears' sales pressure. Finally, a potential broad rollout of appliance sections at J.C. Penney could chip away at one of Sears' few remaining areas of strength.

The downward sales trend has worsened dramatically in the past year. Through the first three quarters of fiscal 2015, domestic comparable-store sales plummeted 10.1% year over year.

In many product categories, the company's profitability improved despite the big sales declines, as Sears and Kmart pulled back on promotional activity. Nevertheless, the overall results are nothing to cheer about. Sears Holdings modestly reduced its adjusted loss in the first half of the year, but its adjusted loss started to creep upwards again in Q3.

More sales pressure coming
In an environment where even relatively strong department store and discount store chains are facing sales pressure, the prospects for a recovery at Sears are bleak indeed. J.C. Penney's recent announcement that it will re-enter the appliance market after a 33-year absence is one more threat looming on the horizon.

Sears has historically been the leading U.S. appliance retailer. Photo: The Motley Fool

Sears is the top appliance seller in the country, but it has been losing market share rapidly in recent years. Even as U.S. appliance demand has been quite strong, Sears has faced uneven sales and profitability trends in this key category.

For now, J.C. Penney has only committed to selling appliances in 22 pilot stores and online. But if the test performs well, J.C. Penney will likely add appliance sections to most or all of its roughly 1,000 stores. This could cause further contraction for one of Sears' strongest remaining business lines.

Monetizing real estate won't work forever
To fund its massive operating losses, Sears has sold off a lot of real estate in recent years. The company took its boldest step in this direction last July by spinning off Seritage and executing sale-leaseback agreements with the new company for 235 Sears and Kmart stores. This transaction generated $2.7 billion in cash.

That may seem like a lot of money. However, Sears has already used nearly half of the proceeds to pay down debt. Moreover, the company's free cash flow burn totaled nearly $1.7 billion over the last four quarters. This means that barring a miraculous sales and margin recovery, Sears is on pace to burn through the Seritage cash injection by mid-2017.

Even after the Seritage sale-leaseback transaction, Sears Holdings still owns 421 of its stores, giving it more real estate monetization opportunities. However, it included many of its higher-quality properties in the Seritage deal. As a result, the real estate value per store for Sears' remaining properties could be quite a bit lower.

Sears' hardlines brands -- Kenmore, Craftsman, and DieHard -- have also been flagged in the past as holding substantial value. However, all three brands are losing market share, which is eroding their value. This trend is likely to continue as long as sales continue to shrink at Sears and Kmart.

This can't last forever
Sears' strategy of shrinking to profitability seems to have failed. As a result, the company is likely to continue burning more than $1 billion of cash annually for the foreseeable future.

Sears may be able to offset a few years of losses by selling off the rest of its real estate and by selling debt backed by its other remaining assets. But this is not a long-term fix. In five years or so, there probably won't be any sources of cash left. And with the core retail business being persistently unprofitable, that would mean the end of Sears and Kmart.