Please ensure Javascript is enabled for purposes of website accessibility
Log In Help Join The Motley Fool
Free Article Join Over 1 Million Premium Members And Get More In-Depth Stock Guidance and Research
By George Budwell - Jan 26, 2016 at 10:50AM

The biopharma's shares briefly spiked today on a positive clinical update for the company's closely watched treatment for hyperkalemia.

What: Shares of biopharma company Relypsa (NASDAQ: RLYP) gained more than 11% right after the opening bell this morning on heavy volume. The stock's double-digit move upwards was triggered by the news that the company's FDA-approved treatment for elevated potassium levels (hyperkalemia) failed to show any clinically meaningful reductions in absorption levels when taken with 9 out 12 drugs tested in a series of small early-stage studies. Perhaps most encouragingly, these studies reportedly showed that all 12 drugs tested produced normal absorption levels if administered at least three hours apart from the treatment, called Veltassa.

So what: Ever since Veltassa's approval last October, investors have been concerned about the drug's black-box warning outlining the potential for interactions with other orally administered medicines. Indeed, the stock has now fallen by nearly 50% from its 52-week highs, according to S&P Capital IQ: 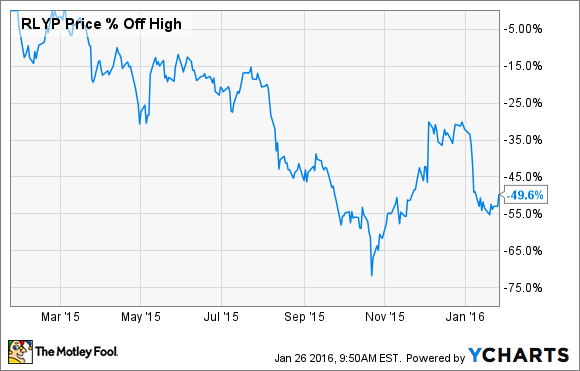 The concern among Relypsa's shareholders is that this black-box warning for Veltassa could allow AstraZeneca's (AZN -0.39%) rival experimental drug, ZS-9, to capture the lion's share of this billion-dollar-plus market. After all, AstraZeneca has stated that ZS-9 didn't have any significant drug-drug interactions in its trials.

Now what: The company now needs to consult with the FDA about the next steps toward getting this black-box warning lifted. Although this process could take several weeks, the good news is that Relypsa does have until May 26 before the FDA is scheduled to make a decision on AstraZeneca's regulatory application for ZS-9.