Perhaps. But the video chip specialist faces one key hurdle.

As if last year's veritable roller coaster ride wasn't enough to test the resolve of weary Ambarella (AMBA -0.73%) investors -- shares more than doubled through the first half, only to pull back and close up "just" 10% when all was said and done in 2015 -- 2016 has proven no less frustrating for the video processing chip specialist.

Just a few weeks into this year, Ambarella stock has already declined nearly 34%, badly under-performing even the broader market's 8% drop: 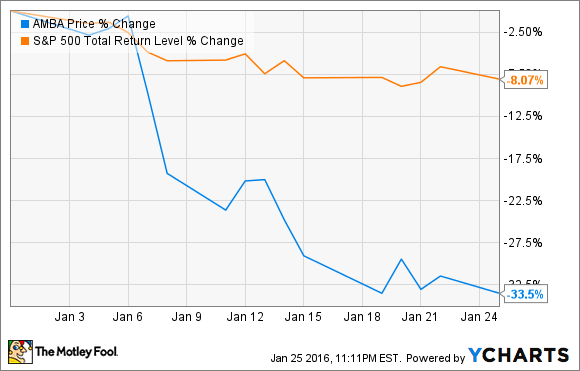 To Ambarella's credit, this drop came through no fault of its own, but rather as a sequence of sympathetic negative moves. More specifically, Ambarella started by falling along with the broader market's steep pullback, then continued down after key customer GoPro (GPRO 1.83%) released disappointing preliminary results for its own holiday quarter.

But this also raises the question: Could Ambarella possibly salvage a winning year in 2016? Or, to be even more bold, could 2016 possibly be Ambarella's best year yet?

My answer to both: Maybe. But unless Amabarella's supplementary market verticals manage to significantly accelerate growth from here, it'll need to overcome the hurdle it faces in the stagnant wearable camera market first.

The GoPro effect
Up until recently, GoPro accounted for as much as 30% of Ambarella's total sales. So, it should come as no surprise that GoPro's previous exceptional quarterly performances through the first half of last year are arguably the main reasons Ambarella stock rose as high as it did. And despite strong growth from smaller markets including IP security cameras, automotive, and drones -- the last of which management confirmed grew to around 10% of sales as of its fiscal second quarter last year -- some analysts still estimate GoPro will comprise as much as 25% of Ambarella's revenue in the coming year.

But even then, Ambarella management admitted that while the current year-over-year drop in the wearable sports camera market is expected to result in a "moderate decline" in revenue for its fiscal first-quarter 2017 -- likely to be announced in early March -- they expect all markets to resume year-over-year growth by the second half of this fiscal year. To be sure, Ambarella's latest guidance calls for full fiscal-year revenue growth of between 15% and 20% -- below its long-term target model of 20% to 25% growth, but still representing healthy growth when all is said and done.

The wild card
However, we should also keep in mind that GoPro's disappointing holiday quarter guidance was more than just a slight miss relative to expectations; blaming slower-than-expected sell through at retailers in the first half of the quarter, GoPro told investors earlier this month to anticipate that revenue will plunge more than 31% from the same year-ago period to $435 million -- far worse than analysts' consensus estimates for a 19.3% decline.

To be fair, GoPro did state its top line was negatively affected by around $21 million in price protection charges related to dropping the price of its HERO4 Session camera. But given its outsized contribution to Ambarella's results, and depending on the extent to which the remaining decline was unit-based, Ambarella investors are rightly concerned that GoPro's early weakness could portend trouble for the chip maker's ability to maintain its own financial guidance.

At the same time, GoPro will almost certainly refresh its high-end HERO camera offerings in time for the 2016 holiday season, and it also plans to launch its own differentiated quadcopter solution sometime in the first half of 2016. So, while the latter may not reduce Ambarella's reliance on this single customer, any success there could further serve to at least offset sluggishness in the core wearable camera market.

A(nother) banner year?
Investors shouldn't forget 2015 was technically a banner year for Ambarella in terms of both revenue and net income. So, by that measure, any further growth this year will technically make 2016 the company's best year ever. But our market is a forward-looking machine, and if Ambarella shareholders have any hope of revisiting the stock's all-time highs set last year, the company will need to demonstrate it has what it takes to resume sustained, profitable growth over the long term.

Thankfully, GoPro's current pain notwithstanding, it appears Ambarella is poised to do just that, even if it takes until later in the year to happen. In the end, that's why I remain convinced Ambarella stock is poised to handsomely reward investors willing to watch patiently as its long-term story plays out.

Steve Symington has no position in any stocks mentioned. The Motley Fool owns shares of and recommends Ambarella and GoPro. Try any of our Foolish newsletter services free for 30 days. We Fools may not all hold the same opinions, but we all believe that considering a diverse range of insights makes us better investors. The Motley Fool has a disclosure policy.