Making sense of JPMorgan's chances for 2016

While those eight cents are not a huge sum, if that prediction turns out to be true it would still be a new record, making 2016 it the best year yet for JPMorgan earnings per share. However, I'm not convinced that 2016 will be the best year yet for the bank's investors, even if the bank blows earnings expectations out of the water.

Predicting short term stock success isn't just about a bank's revenue, profits, or dividends
There are a whole host of problems that could interfere with JPMorgan's business and cause it to miss its earnings expectations this year. More challenging even still, many of these challenges could prevent the stock from rising even if the bank does put up record numbers.

The stock's performance will more likely rise or fall based on the market's sentiment for the future instead of the bank's current fundamental performance. Long term investors, can sleep easy in this scenario; the bank's underlying performance is highly correlated to long term stock price changes. However, for the investor only looking to buy and sell over the next year or so, that correlation is not nearly as strong. JPMorgan may crush earnings expectations in 2016, but if the market is focused on other external forces, the stock price may not reflect the bank's fundamental success. For shorter term investment horizons, that's a problem.

Consider the London Whale scandal in early to mid-2012. The bank announced that a rogue trader had amassed over $6 billion in losses from a series of ill-advised and unapproved trades. On the news, the market punished the bank's stock down about 30% over the following weeks.The trading loss, as large as it was, turned out to be a mere blip on the bank's income statement, one which was quickly overcome. The bank produced record profits in 2012, in spite of the London Whale. 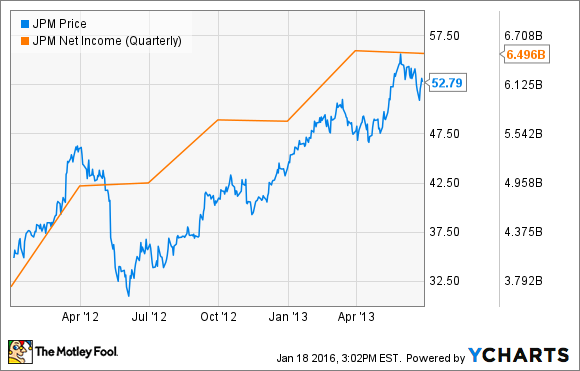 JPMorgan's internal commodities researchers predict that crude oil will still be priced in the low $30's this time next year. If prices stay this low for an extended period, the bank would have to deal with defaulting loans in its oil and energy credit portfolio, economic problems that could hurt other business and retail lending in regions where oil is a major industry, and also create a difficult environment for the bank's commodities traders and investment banking business in the energy sector.

While I think it is unlikely that these problems would present any major existential problems for the bank, they are more than enough to hurt fundamentals and certainly cause investors to flee the stock.

The challenges don't stop there. The Federal Reserve began raising interest rates in December, a move that many (including myself) view as a net positive for banks. Banks should be able to raise prices and boost margins in a rising rate environment. However, there's a flip side to that that argument as well. Rising rates allow banks to charge more for loans, but that also means that borrowing will be more expensive for businesses and individuals. That could lead to lower loan volumes, or worse yet, a slowdown in the broader economy as people spend less on credit and businesses rethink investment and spending plans with these higher capital costs.

If the economy does react poorly to the higher rates, it could send all stocks lower, including JPMorgan and other banks. That decline could come even if the bank successfully boosts its profits and revenues from the higher yield on its loans. Again, this could be a fundamental positive but still drive the stock lower because of broader based negative sentiments. 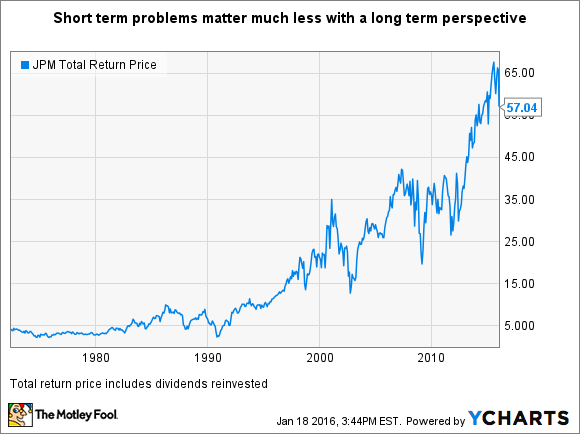 The list of challenges in 2016 goes on and on. There's slowing growth in China. Geopolitical problems in the Middle East. There's even a Presidential election to take into consideration. For an international bank like JPMorgan, all of these global and domestic considerations could have a negative impact on performance, sentiment, or both. It seems quite plausible that the bank could have a great year fundamentally, but still see its stock lag.

What is an investor to do?
It's a scary world out there, and there is a lot that can go wrong in the short term. In the long term though, you have a much better chance to succeed.

In the long term, the bank's fundamental performance is a much better indicator of its stock price potential. Over the long term, events like the London Whale, cyclical oil prices, and global economic concerns become speed bumps on an otherwise consistent path from the lower left to the upper right.