Please ensure Javascript is enabled for purposes of website accessibility
Log In Help Join The Motley Fool
Free Article Join Over 1 Million Premium Members And Get More In-Depth Stock Guidance and Research
By Beth McKenna - Jan 26, 2016 at 9:00AM

The food and coffee maker took on a lot of debt to finance its Big Heart Pet Brands acquisition. Will this jeopardize a dividend hike?

J.M. Smucker (SJM 0.85%), the maker of such cupboard staples as Folgers and Dunkin' Donuts coffee, Jif peanut butter, and Smucker's jam, has been filling investors' pocketbooks while it fills Americans' stomachs. The company's stock returned 17.7% to its investors, through stock-price appreciation and dividend yield, over the past one-year period, through Jan. 22, significantly beating the S&P 500's 4.8% loss. Even tastier, its returned 291% over the 10-year period versus the broader market's 87% return.

The family-operated company has long been known for its conservative and transparent management, which has earned it loyal investors. Many investors appreciate Smucker's dividend, so let's look at the likelihood of a payout increase in 2016.

Serving a tasty dividend dish
Smucker has a long history of paying dividends, and 2015 marked the 14th consecutive year that it increased its quarterly cash dividend. That Smucker has generally kept its dividend rising even in leaner times is a testament to its resiliency and commitment to its shareholders. In 2008, the company even paid out a whopping special cash dividend of $5 per share in connection with its Folgers acquisition, demonstrating the depth of this commitment. 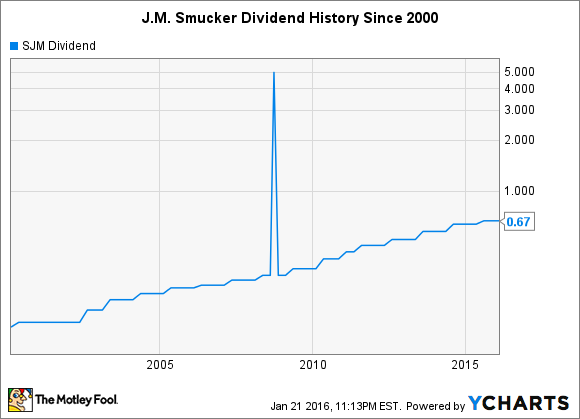 Smucker's dividend yield is 2.1%, as of Jan. 22, which is about average to a bit higher than average for the packaged and processed food industry. By comparison, Mondelez International (MDLZ -0.14%) -- known as Kraft until 2012 – is yielding 1.5%, while ConAgra (CAG -0.14%) tops the group with a 2.5% yield. However, Smucker's 10-year total return of 291%, which includes dividends, has handily beaten the 236% and 170%, respectively, that Mondelez and ConAgra have fed their investors' accounts. Further, ConAgra, which has been struggling in recent years, hasn't raised its dividend since 2012.

Two somewhat related major reasons for Smucker's long-term success, in my opinion, are its excellent eye for acquisitions and the ability to incorporate them into its business, and its strategy of aiming to own the No. 1 brand in each of the categories in which it competes. Its $3 billion buyout in 2008 of Folgers from Procter & Gamble, which moved Smucker into the coffee business, has proven to be a great move. Smucker's coffee segment has been powering the company's revenue and earnings growth.

Payout ratio balloons in 2015
Smucker made its biggest acquisition ever last March, when it bought pet-food maker Big Heart Pet Food Brands, for about $5.8 billion. Big Heart is a major player in the $21 billion U.S. pet-food business, making such staples as Milk-Bone, Kibbles 'n Bits, and Meow Mix and, notably, holds the No. 1 position in pet snacks. While this buy seems like a shrewd move, one major downside is that it considerably "ate" into Smucker's net income in 2015.

As a result, the company's payout ratio (dividends paid/net income) ballooned to about 75% from its norm hovering around 40%. 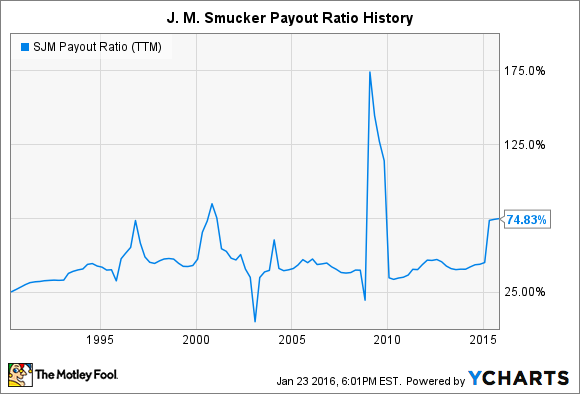 The payout ratio last spiked in 2008, though this was a one-time event because of the $5 special dividend Smucker paid in connection with the Folgers acquisition. In 1996 and 2000, the payout ratios shot up to more than 70% and 80%, respectively. Payout ratios above 70% generally suggest that a company won't raise its dividend. Further, Smucker's long-term aim is to keep its dividend payout ratio to about 40%. As would be expected, Smucker didn't increase its dividend in 1996, 1997, or 2000.

A payout ratio of 75% doesn't usually bode well for a dividend hike, but ...
In most cases, a 75% payout ratio would mean that investors should definitely forget about a dividend increase in 2016.

However, there's a big "but" here: Smucker is generating more cash than its net income, which is merely an accounting metric, suggests. Payout ratios are typically calculated by dividing cash dividends paid by net income in a given period because it's a quick and easy calculation. The cash dividend payout ratio, however, gives a much more accurate picture of how much paying dividends is really costing a company. This metric is the proportion of free cash flow (after preferred dividends) that is paid as dividends to common shareholders.

Smucker is only paying 29% of its free cash flow after preferred dividends are paid as dividends to common shareholders. 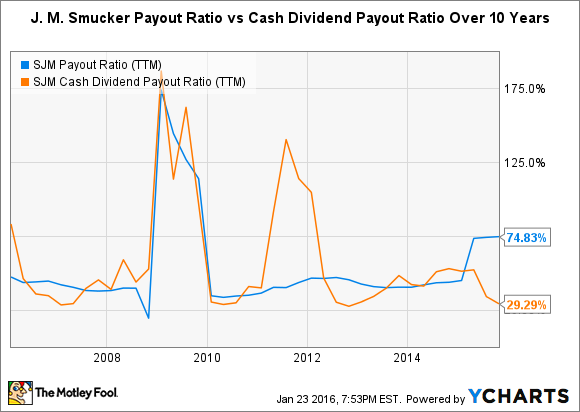 This fact suggests there's a good chance that Smucker investors can expect a dividend increase in 2016.

Beth McKenna has no position in any stocks mentioned. The Motley Fool has no position in any of the stocks mentioned. Try any of our Foolish newsletter services free for 30 days. We Fools may not all hold the same opinions, but we all believe that considering a diverse range of insights makes us better investors. The Motley Fool has a disclosure policy.