Even though the market for oil and gas has been completely downtrodden, Core Laboratories (NYSE:CLB) has done a rather commendable job of keeping its earnings in the black. Its ability to maintain pricing power and preserve margins is the envy of the oil services sector. 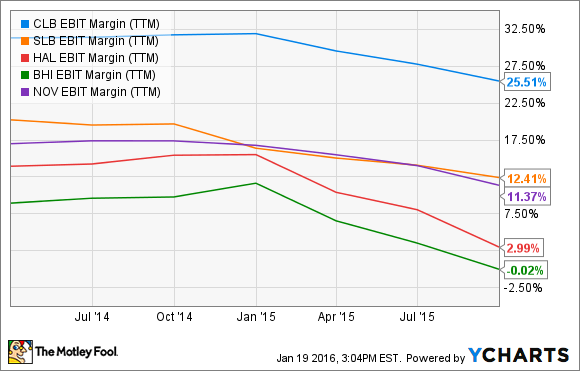 Despite being able to keep its margins up, Core Labs based some of its business decisions on the idea that oil prices probably wouldn't be this low and drilling activity sliding as it has. With oil hovering below $30 a barrel, is it possible that Core Labs will need to alter its outlook for 2016 and possibly beyond? Let's take a look at what the company was anticipating from the oil market, whether that has happened, and what it can do to make it work in this low price environment.

So much for that theory
During last quarter's conference call, CEO Dave Demshur said that Core Labs was projecting a decline in production from the Middle East, as it saw the current production levels unsustainable based on prices, available spare capacity, and investment levels.

So far, though, that hypothesis has not come to pass. Not only did OPEC production remain steady throughout the fourth quarter, but its production levels increased to three year highs in November. Granted, spare capacity among the OPEC nations has remained rather low, but the December meeting that resulted in a decision of no-quota production has led several nations within the cartel to ramp up in hopes of capturing market share.

Core Labs' management was wrong about this one, at least on the timing of it. But the question does remain whether these producers can maintain these production levels without significant capital spending. With countries running large government deficits -- Saudi Arabia had to draw down its monetary reserves by $97 billion -- it won't be as easy to find the cash to reinvest in production. Perhaps Demshur's thesis will turn out right, but it might just take longer than originally anticipated.

Meeting muted expectations
Even under the theory that we would start to see a production response from OPEC producers in the fourth quarter, Core Labs' management was guiding for some pretty modest expectations for the fourth quarter. On its last conference call, it announced that revenue would likely decline by 9% from the sequential quarter and that earnings would slip into the $0.63-$0.67 range.

Whether the company can meet those expectations is questionable based on what actually happened during the quarter compared to what management predicted. Rig counts in the U.S. declined even further in the third quarter, so chances are there will be another decline from that part of the business. However, the company did say during its last conference call that it's exploring ways to optimize the process of restimulating previously fractured wells.

The technology transformation that has taken place in the oil patch goes beyond the ability to extract oil and gas from shale. In just the past couple of years, companies have become much, much better at it and have drastically increased recovery rates -- the percentage of oil that is pulled out from the well compared to total reservoir size. Some of the original shale wells on very good acreage positions had recovery rates in the low single digits. Today, companies think they can push those recovery rates all the way to 20%.

If Core can develop some technology offerings and well diagnostics that will help producers get more out of these old wells, then it could be a nice revenue boost that will help tide the company over until more true drilling work happens again.

What a Fool believes
Oil's decline to below $30 a barrel caught a lot of people off guard, including Core Labs' management. The company anticipated weaker drilling activity over the past, current, and possibly next few quarters, but the OPEC policy change has thrown a monkey wrench in their outlook.

These may affect the company's results over the next couple of quarters and cause some investors to shy away from Core Laboratories, but the fact of the matter is that it has maintained some pricing power, higher margins than most of its peers, and has very low capital obligations, suggesting that Core Laboratories will weather the storm and will be a strong company on the other side of this cyclical downturn.

Core Labs reports earnings on Jan. 28 before the market open and a conference call will follow.