Please ensure Javascript is enabled for purposes of website accessibility
Log In Help Join The Motley Fool
Free Article Join Over 1 Million Premium Members And Get More In-Depth Stock Guidance and Research
By Keith Speights - Jan 27, 2016 at 11:02AM

This genomic sequencing leader appears to be suffering from multiple revenue headwinds -- at least in the near term.

The new year hasn't been very happy so far for Illumina (ILMN -3.67%) shareholders. The genomic sequencing company's stock fell as much as 14% by mid-January before rebounding a little. While Illumina's dismal year-to-date performance was mainly due to the broader market pullback, the company could face challenges even if the major indices rally. Here are three reasons Illumina's stock just might fall even more when the company announces its fourth-quarter results on Feb. 2.

What caused this sluggishness? It's possible that Illumina's sales force is pushing its higher-end HiSeq systems more aggressively. That would be understandable, since even the least expensive HiSeq sells for nearly seven times the price of the MiSeq. You can't blame salespeople for chasing higher commissions.

The more likely culprit, though, is weakness in the Japanese market. Money for genomic research has dried up considerably in the island nation over the last 18 months or so. Illumina thinks this is only a temporary situation. If they're wrong, sales for MiSeq and NextSeq will continue to languish, potentially pulling Illumina's share price down.

2. International inertia
Japan isn't Illumina's only area of concern. Third-quarter results from its entire Asian operation came in lower than expected, as did earnings from Europe.

The Chinese market, in particular, is presenting it with competitive challenges. Illumina doesn't have as large a sales presence in China as rivals like Thermo-Fisher (TMO -0.53%). That shows up in the company's results. While Illumina reported weakness in China during the third quarter, Thermo-Fisher announced robust overall sales growth there -- and has even touted plans to replicate its China strategy in other emerging markets. Thermo-Fisher currently generates 18% of its revenue from emerging markets, but the company clearly sees an opportunity for this number to grow.

What about Europe? The good news for Illumina is that the company typically can introduce new products more easily there, and the market for non-invasive prenatal testing (NIPT) in Europe is quite strong. The bad news is that still wasn't enough for the company to meet revenue expectations there -- European sales grew only 6% in the third quarter, a tepid result partially caused by currency headwinds.

That's even worse news given how important international sales are for Illumina. Take a look at the company's shipments by region for fiscal 2015 as of Sept. 27: 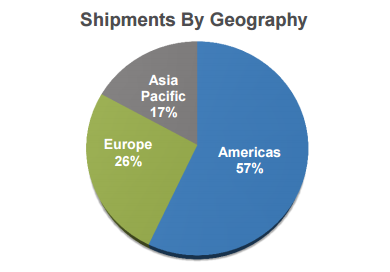 Over 40% of Illumina's business stems from international markets. The bottom line is that if the company's sales inertia in Asia and Europe persists, its financial results -- and stock price -- will likely be negatively affected.

3. Array disarray
Array revenue dropped 17% year-over-year in the third quarter. Gene expression arrays give information about the entirety of gene activity and account for roughly 15% of Illumina's business. So, the drop here amounts to a pretty significant issue for Illumina that may be difficult to compensate for via growth from other products.

The big question is how long its array woes will continue. Illumina hasn't given much encouragement on that front for the rest of fiscal 2015. On the other hand, in 2016, the segment might show some small levels of growth. That, at least, would be better than sales falling by double-digit percentages.

Over the short term, though, I suspect we'll see more poor array revenue figures. I wouldn't be surprised by another round of bad news on this front when the company announces its fourth-quarter results.

Negative Nelly?
It's quite possible that these three factors will contribute to Illumina's stock dropping in the next few weeks and months. And the company could face additional competitive challenges, particularly with Thermo-Fisher's planned $1.3 billion acquisition of Affymetrix.

You might think I'm being overly pessimistic about Illumina's prospects. However, I'm actually bullish about Illumina over the long run. I like its potential in the NIPT and oncology markets especially. Sure, over the short term, the three issues detailed above could make Illumina's stock fall. Looking further into the future, though, there are even more reasons that the genomic sequencing company could be a big winner for patient investors.

Keith Speights has no position in any stocks mentioned. The Motley Fool recommends Illumina. Try any of our Foolish newsletter services free for 30 days. We Fools may not all hold the same opinions, but we all believe that considering a diverse range of insights makes us better investors. The Motley Fool has a disclosure policy.