Retirees should look for companies with low risk, good growth, and stable income. Here are three to consider.

Investors in their golden years should be searching for income-producing stocks that offer good long-term growth prospects, and come with a lower-than-average level of risk. Companies with those characteristics in place tend to have strong competitive advantages working in their favor that allow them to crank out cash flow year after year, allowing their investors to sleep well at night.

With that in mind, we asked some of our top Motley Fool contributors to highlight a stock that they think is an ideal choice for a retiree. Read below to see which companies they think are solid choices to invest in today.

Matt Frankel: Retirees generally want two things when they invest -- steady income, and relatively low risk. One place you can find that is with real estate investment trusts, particularly those with a long record of safety and performance, like Realty Income (O 1.10%).

Realty Income primarily invests in free-standing retail buildings, and specifically those occupied by retailers with little or no threat of online competition, such as non-discretionary retailers and service-based businesses. The company has a vast portfolio of more than 4,400 properties, and is spread out geographically all over the U.S.

As far as safety is concerned, consider that Realty Income currently operates at a 98.3% occupancy rate, and has never fallen below 96% occupancy no matter what the economy was doing. Tenants sign long-term net leases, which generally have annual rent increases built in and require the tenants to cover variable costs such as taxes, insurance, and maintenance.

Known as "the monthly dividend company," Realty Income pays a 4.65% annual yield in monthly installments, and the payment amount has been increased 83 times since the company went public in 1994. Even more impressive is the stock's total return potential, which factors in stock price appreciation, as well as dividends. During its public history, Realty Income has produced a total return of about 2,600%, more than five times the S&P's performance over that time. 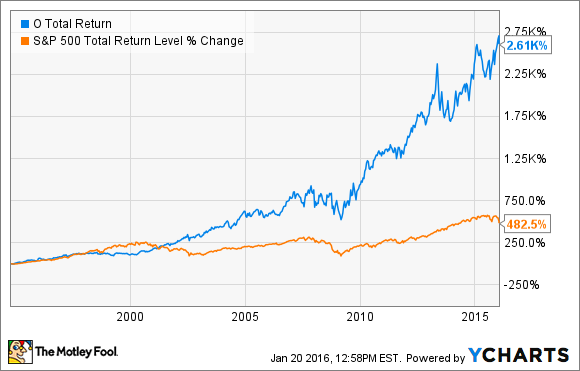 Brian Feroldi: Retirees might want to take a cue from master investor Warren Buffett and consider adding Wells Fargo (WFC 1.52%) stock to their portfolios. Buffett is such an admirer of this company that he turned it into Berkshire Hathaway's largest holdings, as Buffett's company currently owns more than 470 million shares of Wells Fargo valued at more than $24 billion.

It's easy to see why Warren has such a crush on Wells Fargo. With 8,681 stores servicing more than 70 million customers nationwide, Wells Fargo is an industry giant. The company uses its vast footprint and brand strength to continually bring in new customers, who, in turn, make deposits, and take out loans that allow the bank to grow at industry-leading levels.

Its management team is also laser focused on controlling costs, as its efficiency ratio of roughly 58% is one of the best in the business. That allows the company to produce strong profits even as it prices its products to compete in the market.

Wells Fargo's management team has also done a great job diversifying its business across an array of different product lines that helps bring stability to its revenue. The company offers commercial lending, residential lending,  auto lending, wealth management -- and more -- that allow it to meet its customers' banking needs.

Wells Fargo is also a nice dividend play, as it currently yields more than 3%, and shares are not all that expensive, as they are trading for less than 12 times earnings, and roughly 1.4 times its book value. I think thats a perfectly fair price to pay for this strong business, so retirees who are after income and stability should give this stock a look.

Selena Maranjian: Retirees seeking portfolio candidates would do well to look for healthy, growing companies with promising futures and, ideally, a meaningful dividend yield. One contender is Verizon Communications (VZ 0.83%), the $190-billion telecom giant. Verizon's dividend recently yielded 4.8%, and it has increased its payout for nine years in a row now. The increases haven't been massive, but with a payout ratio below 60%, they seem likely to continue for the foreseeable future.

How do Verizon's financials look? Well, pretty good. It's raking in about $130 billion annually, and keeping close to 8% of that as earnings. In its third quarter, Verizon's wireless division added 1.3 million  new monthly wireless subscribers, for a total of 105 million, with revenue growing 5.4% year over year. Its performance topped analyst expectations, and it boasted low "churn" numbers, too, as many customers are sticking around. Meanwhile, Verizon has been enjoying solid growth of its FiOS fiber optic service.

The ground under Verizon's feet is shifting a bit, as consumers cut cable cords in order to stream video more, smartphones proliferate, and the mobile arena becomes more important. One of Verizon's responses was to buy AOL, as it launched its go90 "mobile-first social entertainment platform." Verizon also bought the chunk of its wireless business that Vodafone used to own, giving it sole ownership of that growing revenue stream.

Everything isn't perfect for Verizon, as it's carrying more than $110 billion in debt; but it's also a cash cow, having generated nearly $16 billion in free cash flow in its first three quarters in 2015. Verizon's valuation is attractive, with its recent and forward-looking P/E ratios of 18.1 and 10.6, respectively, well below its five-year average of 43.9. If you believe that Verizon will remain a key player in wireless and beyond for the foreseeable future, it may deserve a berth in your portfolio.