The energy-heavy industrial's results weren't quite as good as General Electric Company's, but investors reacted in different ways. Here's a look at why.

In a week when General Electric Company (GE -1.31%) stock fell after a decent set of results marked by weakness in its oil and gas segment, energy-heavy industrial Dover Corporation's (DOV -1.25%) stock rose nearly 6% after reporting in a very similar vein. What happened to Dover, and does this mean market sentiment is changing?

Market expectations
U.S. industrial production turned negative in the last two months of 2015, and heavy industries like mining, energy, and shipping have been weak for some time. In response, the market has increasingly sought so-called safe-haven stocks with relatively favorable end market exposures. General Electric springs to mind as one. Dover does not, and as you can see in the chart below, the former has notably outperformed the latter in the last six months. 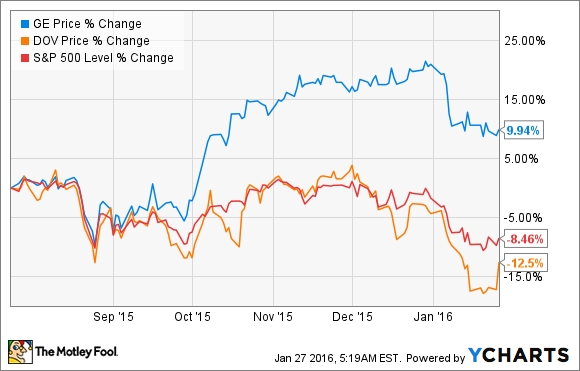 Despite guiding its oil and gas revenue to the low end of its 2016 guidance range, General Electric reaffirmed its overall organic revenue and EPS guidance and increased its free cash flow guidance by $1 billion due. Nonetheless, the stock sold off while Dover Corporation rose after the company lowered its 2016 organic growth forecast by a point, to a decline of between 1% and 4%.

Although Dover reaffirmed its full-year 2016 EPS from a continuing operations target range of $3.85 to $4.05, it only did so because weaker oil and gas performance was "essentially offset by an improved tax rate." Clearly, expectations and valuations with stocks like Dover are low enough to create at least some initial upside with even a moderate set of results. 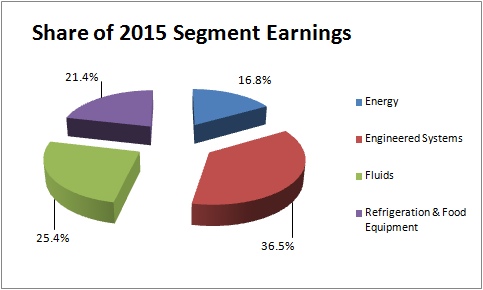 AT THE END OF 2013, ENERGY CONTRIBUTED MORE THAN 37% OF SEGMENT EARNINGS. DATA SOURCE: DOVER CORPORATION PRESENTATIONS.

Dover Corporation's bookings trends
There are two contrasting and key considerations to make before buying Dover:

The company's earnings outlook will come under pressure if its bookings trends carry on deteriorating, and as you can see in the chart below, Dover's bookings trends aren't favorable. Refrigeration & Food Equipment bookings increased 3.4%, but consider that they came up against a weak comparable in the fourth quarter of 2014. 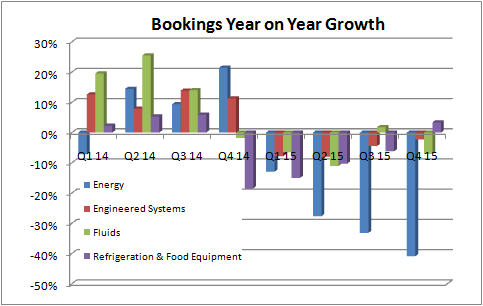 Moreover, a look at Dover's book-to-bill (a useful measure to judge a company's growth, where a reading above 1 is positive) shows only Engineered Systems in positive territory. 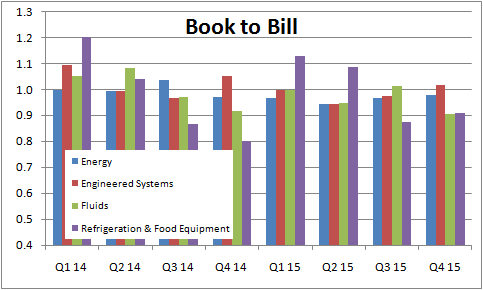 In a nutshell, none of Dover's segments are firing on all cylinders.

Valuation
On the other hand, its current valuation is hardly demanding. Dover's management has done a pretty good job at generating operating efficiencies so as to increase free cash flow conversion. As you can see below, around $795 million, or 11.4% of revenue, was converted into free cash flow in 2015, and management expects around 11% of 2016 revenue to convert as well. 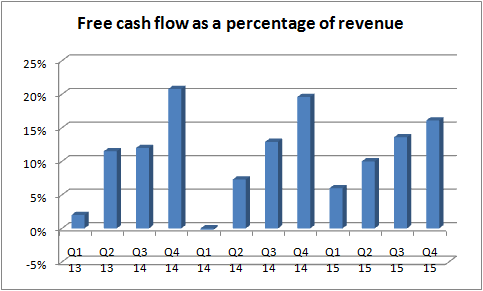 Interpolating from analyst expectations for around $7 billion in revenue for 2026 means investors can expect free cash flow of around $770 million. The figure puts Dover on a forward enterprise value (market cap plus net debt)-to-free cash flow multiple of 13.9 times, a figure that compares favorably with its industrial peers. 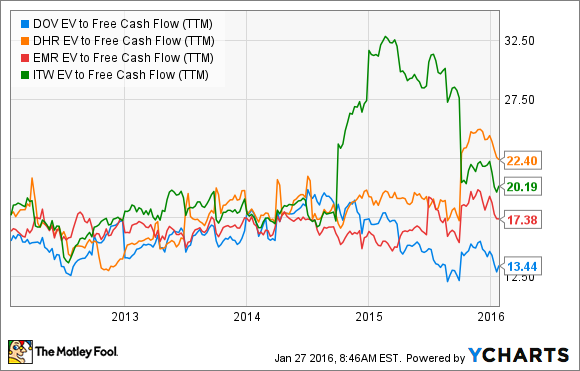 Dover appears to trade at a discount to its peers because of its energy exposure, but the discount is enough to make the stock attractive. Moreover, energy contributed less than 17% to segmental earnings in 2015 -- it's not as important as it used to be for Dover's earnings growth prospects.

The takeaway
All told, the market's differing treatment of results from Dover and General Electric is a sign that at least some investors are looking for value picks rather than safe havens. However, Dover's bookings trends are indicating more pain to come.

On valuation terms, if Dover hits its earnings, and the economy (and energy markets) starts to turn up in the second half of 2016, then the stock looks cheap. Throw in the 3.2% dividend yield, and Dover looks like a tempting value play for investors happy with some energy exposure.