Please ensure Javascript is enabled for purposes of website accessibility
Log In Help Join The Motley Fool
Free Article Join Over 1 Million Premium Members And Get More In-Depth Stock Guidance and Research
By Daniel Miller - Jan 27, 2016 at 9:02AM

Trucks and SUVs will power earnings in North America, but the bottom line in Europe and China shouldn't be overlooked.

Here's what we know: Both Ford Motor Company (F 3.06%) and General Motors (GM 3.63%) are raking in the dough from surging SUV and full-size truck sales in the U.S. market. Ford expects to report record 2015 pre-tax profit, excluding special items, which would fall in the upper half of its guidance of between $10 billion and $11 billion. It also expects its North American operating margin to be strong: Through the first three quarters, Ford's operating margin has averaged 9.9%, a very strong number.

The story is much the same for crosstown rival General Motors, which is on track to deliver double-digit growth in its EBIT-adjusted and earnings-per-share adjusted figures for full-year 2015 results. It expects to report 10% EBIT-adjusted margin in North America, which is a year ahead of schedule.

What we don't know, though, is how Detroit's two largest automakers fared overseas in a struggling European region as well as in a slowing China.

First up: Europe
Ah, Europe, long a thorn in the side of U.S. automakers, which have struggled to post even a quarter of profits in the region since the financial crisis and ensuing recession. Ford's and General Motors' losses mirror each other, and both are slowly trending in the right direction. 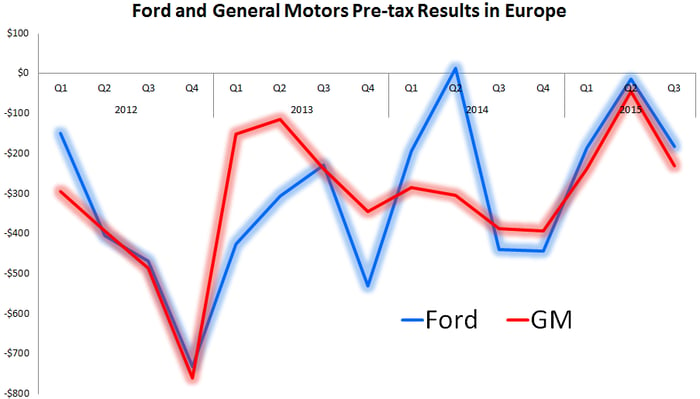 Although both companies expect to generate profits in Europe this year, it's taken about a year longer than expected and it's plausible that the companies won't be reporting meaningful profits until the third and fourth quarters of 2016.

However, if both companies report better-than-expected results for the fourth quarter -- which, as you can see, has historically been a poor one for the automakers in Europe -- it would be a great sign for investors hoping to see profits sooner rather than later. Consider that Ford and GM each has lost roughly $4.6 billion in Europe since the beginning of 2012.

On the optimistic side of things, both companies had a strong selling year in the region.

Ford managed to sell 1.3 million vehicles last year in its traditional 20 European markets, which was the company's best volume since 2011. Its sales checked in 11% higher compared to 2014, which was also ahead of the industry's overall 9% gain. GM's Opel/Vauxhall brands also reported their best sales result since 2011, with more than 1.1 million units sold, despite GM's decision to pull out of the Russian market entirely.

One bright spot for Ford is that its sales of SUVs, which are more profitable than smaller cars that sell at a higher volume in Europe, were up 31% for 2015. If that trend continues, it could be just what Ford needs to cut its losses in the fourth quarter and post a potentially profitable quarter during the first half of 2016.

Next up: China
The world's largest automotive market was a wild ride for automakers last year. China's sales of new vehicles slowed to a meager 3.9% gain during the January-October period, down from 10% gains through the same time period in 2014. That slow growth prompted the government to cut the new-vehicle purchase tax in half, from 10% to 5%. It's a strategy that has worked very well in the past, and it absolutely provided a boost to vehicle sales during the last quarter of 2015.

Through the first 11 months of 2015, GM's sales in China increased 4.1% before the tax incentive took hold and sent its sales surging 14% higher in both November and December, compared to the prior year. Ford experienced a similar boost in sales with a 9% jump in November and an even larger 27% gain in December, compared to its prior-year results.

What we don't know, though, is how the surging sales will boost Ford's and GM's bottom lines in their respective Asia-Pacific and GMIO regions, which are largely driven by China's performance. 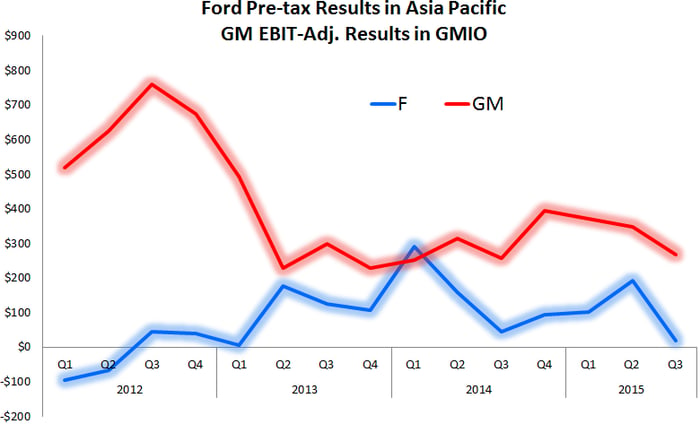 If General Motors posts its best EBIT-adjusted result of 2015 and Ford comes close to its second-quarter result, it would be a big win. It would also suggest that 2016 will be better than anticipated since the government's tax incentive on new vehicles will last throughout the year. However, it'll be a development to keep an eye on because automakers have been preparing for surging sales in China to continue, and if that fades as the end of 2016 gets closer, it will make for a bumpy ride in 2017 as automakers try to match supply and demand.