Please ensure Javascript is enabled for purposes of website accessibility
Log In Help Join The Motley Fool
Free Article Join Over 1 Million Premium Members And Get More In-Depth Stock Guidance and Research
By Daniel B. Kline - Jan 27, 2016 at 11:12AM

The company faces an unprecedented and maybe unwarranted fine for the actions of a contracted third party.

Enacted in 2005, the National Do Not Call Registry has protected consumers from unwanted calls. The rules are pretty simple and they're designed so people can have dinner or watch television without being deluged by a steady stream of telemarketers seeking to sell them something. Its entire purpose and operation is described in a paragraph on its homepage:

The National Do Not Call Registry gives you a choice about whether to receive telemarketing calls at home. Most telemarketers should not call your number once it has been on the registry for 31 days. If they do, you can file a complaint at this Website. You can register your home or mobile phone for free.

It's hard for rules to be more clear than that and most companies have complied with the rules as set by the Telephone Consumer Protection Act. But there have been frequent violations and now DISH Network (DISH 3.42%) stands accused by four states and the Department of Justice (DOJ) of massive violations of the rules. If the accusations prove true, the company could be liable for fines that exceed its market cap even though past precedent suggests that's not what should happen. 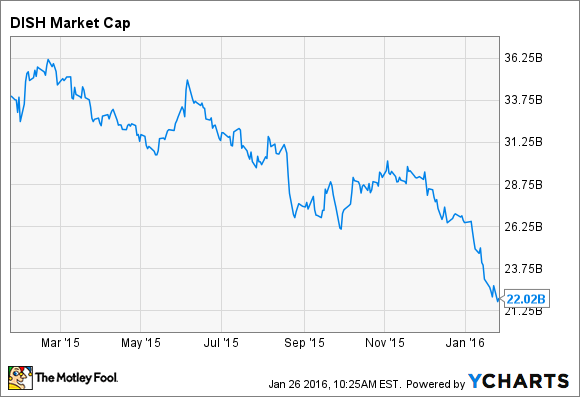 What is DISH accused of?
The DOJ, Ohio, Illinois, California, and North Carolina are seeking $900 million in civil penalties, and $23.5 billion in fines, according to the Denver Post. They seek the money because a judge ruled that DISH and contractors working on its behalf made more than 55 million illegal telemarketing calls using recorded messages and phoning people on do-not-call lists.

A trial to determine whether DISH actually knew it was breaking the law is currently under way.

The satellite television company has already settled with the 46 other states regarding the telemarketing calls paying just under $6 million all together for violating the do-not-call registry, ARS Technica reported.

DISH fires back
DISH does not exactly deny the claims. Instead, the company noted in an email to ARS that "most of the Dish calls complained about took place almost ten years ago and DISH has continued to improve its already compliant procedures." In addition, the email pointed out that in 2008 the company hired Possible Now, a company that specializes in marketing and regulatory compliance.

The satellite television company also has taken issue with the severity of the fines sought by the DOJ and the four states. In a motion filed in U.S. District Court the company called the proposed penalty "a shocking amount far in excess of any penalties that the federal government has sought or obtained from any other entityfor telemarketing violations, and for which the United States provides no factual support."

To support its case, DISH cited a number of similar situations where much lower fines were levied for comparable violations. Specifically it noted cases involving Comcast and DirecTV (which is now owned by AT&T).

Basically, DISH is saying that maybe we did it, but it was a long time ago, we've taken significant steps to improve, and we're probably willing to pay a token fine in line with what Comcast and DirecTV paid.

DISH has a really good point
The numbers being thrown around here seem silly if not downright embarrassing for the DOJ and the four states involved. Perhaps the settlements reached with the other 46 states were too low, but it seems clear that nothing has been done by DISH to warrant fines that are massively higher than the ones set by previous precedents.

It's hard to see why this case is moving forward with numbers this big associated with it. Had DISH not shown remorse or changed the offending behavior, it might make sense to go after the company, but that is clearly not the case.

The satellite company may have committed a huge Do Not Call violation in the past, but its future should not be in the balance due to that transgression. The point of the Telephone Consumer Protection Act and the Do Not Call registry is to stop the American public from receiving unwanted calls.

If DISH has stopped breaking the rules -- which certainly appears to be the case -- and has been compliant for 10 years, then this issue should be settled, a fine paid, a wrist slapped, and a warning for the future given. It's hard to imagine that won't happen and that rationality won't prevail, making this a lot of unneeded bluster by the DOJ and the states threatening these seemingly unwarranted fines.

Daniel Kline has no position in any stocks mentioned. He has never paid a $23.5 billion fine, but got a lot of parking tickets when he lived in Brooklyn. The Motley Fool has no position in any of the stocks mentioned. Try any of our Foolish newsletter services free for 30 days. We Fools may not all hold the same opinions, but we all believe that considering a diverse range of insights makes us better investors. The Motley Fool has a disclosure policy.