Apple's revenue and earnings slowdown is probably only temporary, making this a great time to ramp up share repurchases.

Shares of Apple (AAPL -0.63%) have lost about a quarter of their value since mid-July, as investors began to fear a slowdown in growth. These worries were validated by the company's Q1 earnings report on Tuesday: Apple reported a sharp slowdown in revenue and earnings growth, and it forecast declines for both metrics in Q2.

That said, Apple did earn a record quarterly profit in Q1, with net income up 1.9% compared to its blowout performance in the prior-year quarter. Its financial results are also being negatively affected by the strong dollar: a factor outside Apple's control. The underlying strength of Apple's business remains intact -- and could even be strengthened by upcoming new products.

Furthermore, Apple ended last quarter with a record $215.7 billion in cash and equivalents, compared to only $63.0 billion of debt. All of these factors make it a great time for Apple to ramp up its share buyback activity.

Apple misses expectations
Apple produced revenue of $75.9 billion last quarter, up a little less than 2% year over year. This was near the lower end of the $75.5 billion-$77.5 billion revenue guidance range Apple had provided in October and below the average analyst estimate of $76.6 billion. Apple had never previously fallen short of the midpoint of its revenue guidance range since changing its guidance policy several years ago.

On a more positive note, gross margin was a little higher and operating expenses were a little lower than Apple's forecast. As a result, the company produced record earnings per share of $3.28, whereas analysts had expected $3.23, on average.

For Q2, Apple is projecting a significant decline in revenue to $50 billion to $53 billion, compared to $58 billion in Q2 of fiscal 2015. While Apple doesn't directly provide EPS guidance, its forecast implies an EPS figure of roughly $2, which would be down significantly from $2.33 last year.

Fortunately, Apple faces its toughest comparisons of the year in Q2. As a result, management expects year-over-year growth rates to be better in the second half of the fiscal year. Apple may also have some new products available by then: particularly an upgraded 4-inch iPhone that is expected to debut in March or April.

Deja vu all over again
Apple's position today is highly reminiscent of where it stood in the first half of 2013 and -- to a lesser extent -- in early 2014. Operating income growth turned negative in early 2013 and didn't surpass its previous high until fiscal 2015. Meanwhile, Apple's stock multiple contracted to around 10 times forward earnings estimates. 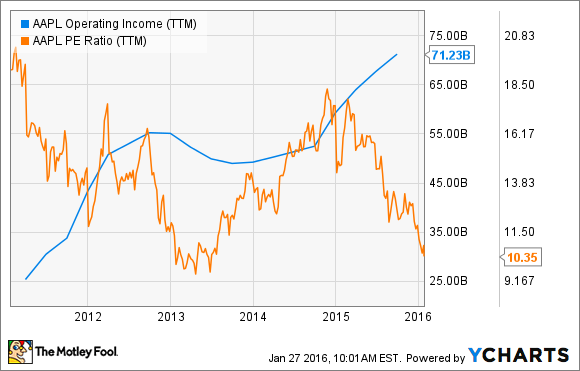 Apple used those pullbacks as opportunities to rapidly ramp up its share buyback activity. In Q3 of fiscal 2013 -- when Apple stock reached its lowest point -- the company spent $16 billion on buybacks, after repurchasing less than $2 billion of stock in the first half of the fiscal year.

For the full 2013 fiscal year, Apple spent a little less than $23 billion on share buybacks. It nearly doubled this amount in fiscal 2014 to $45 billion in share repurchases, before cutting back to around $35 billion in buybacks last year as Apple's share price soared. 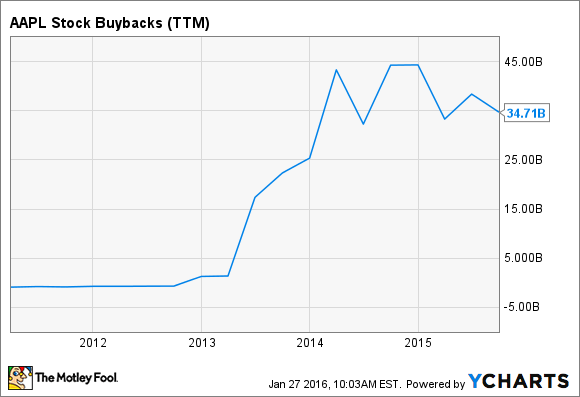 With Apple stock down in the dumps again -- as of Wednesday morning, it traded for about $94, or roughly 10 times trailing earnings -- Apple will probably increase its buyback spending. The company is still generating copious free cash flow and has more than $150 billion of net cash and investments.

Apple CFO Luca Maestri hinted at the company's intentions during the conference call on Tuesday. He stated that Apple would be active in issuing debt this year to fund its capital return program. This is a sensible move, as Apple has been able to borrow money at extremely low interest rates, while the stock is trading at a rock-bottom valuation today.

Apple will probably return to solid net income growth in fiscal 2017, driven by the next iteration of its iPhone along with other new products. Increased share buybacks this year will magnify the potential EPS rebound. This should lead to an even higher stock price a year or two down the road.