With Sabine Pass up and running and a stock price that has taken it on the chin, there are some reasons to believe things are much better for the company.

Cheniere Energy (LNG 2.53%) has received a lot of headlines over the past couple of months, but they haven't exactly been the kind a company wants. Jim Chanos made his short on the company public, and Carl Icahn has kicked Cheniere's founder and CEO Sharif Souki to the curb.

These two major events on top of oil and gas price declines over the past 18 months have sent shares of Cheniere and its subsidiaries, Cheniere Energy Partners (CQP -1.05%) and Cheniere Energy Holdings (NYSEMKT: CQH), way, way down. 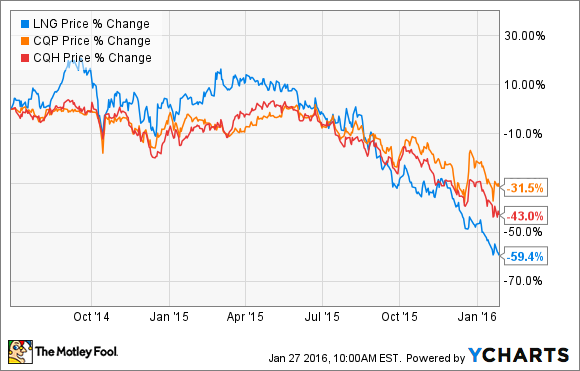 Now that there is so much pessimism baked into Cheniere's stock, will the first cargoes of LNG from its Sabine Pass help to give Cheniere Energy one if its best years to date?

A long time coming
Cheniere Energy has been a bit of a chameleon company. First, it started out as an oil and gas producer. When that didn't work out, it decided to build a regasification terminal to import natural gas. When the shale boom hit and made natural gas importing a losing business proposal, the company decided to make a really bold move and convert its terminal to export natural gas. Almost all of this time, Cheniere as a business has been in what you would consider an "early growth" phase, where it's losing money.

However, this is the year Cheniere's Sabine Pass LNG export facility is expected to deliver its first cargoes in either February or March of this year, and the first four production trains will be up and running one year after that. This is significant because for the first time, we get to see Cheniere as an operating company. For years, we have been looking at the company as a speculative investment, but once the wheels hit the road, this company is going to have to deliver on all of those EBITDA projections it said would be possible once it was up and running.

One thing investors should definitely watch in this regard is if there are any operational hiccups as these first few liquefaction trains start up. If the company runs into maintenance issues and delayed deliveries, it will not reflect well on its ability to generate profits when both its Sabine Pass and Corpus Christi facilities are up and running.

Realistic expectations?
I think its safe to say there was a bit of euphoria and speculation surrounding Cheniere's stock. Sure, at its core, Cheniere looks to be a company that will be able to take cheap natural gas in the U.S., export it to high-cost markets overseas, and churn out cash flows as a result. However, at the company's peak price, expectations were well beyond what the company was actually capable of producing.

According to company projections, the seven trains currently under development will lead to annual EBITDA of $2.1 billion for the parent company. About a year ago, when the company's shares were trading around $80 each, that implied the company was trading at a total enterprise value to EBITDA ratio of 17.1 times. Even a high-growth company wold be hard-pressed to meet those expectations. But what made that share price even more absurd is that Cheniere doesn't expect to reach that EBITDA level until 2021. So, in theory, investors were buying shares of a company hoping it could grow into an already-high valuation five years from now. That's one heck of an opportunity cost.

In fact, that was a large part of the reason Jim Chanos shorted Cheniere's stock back in August. Even at the time of his short, shares were down a bit from their highs, but they were still trading at a very high valuation.

Today, though, expectations are much more modest. After shares have fallen more than 60% since their highs, the company's valuation suggests investors might be able to get a decent return. It will likely take another five years before those gains are fully realized, but that's what long-term investing is all about, right?

What a Fool believes
Right now, Cheniere as an investment looks better than it has in a while. The company is actually going to be an operator of profit-producing assets that will help fund the remaining development projects, and shares are trading low enough now that investors aren't paying a king's ransom for that cash flow. There are still some questions that need to be answered longer term, such as its ability to effectively operate those assets and deal with its high debt levels. However, if we can see progress on these things in 2016, then it could be a decent year for the company's stock.