When it came to its fourth-quarter performance, Facebook (NASDAQ:FB) absolutely crushed it. The big quarter sent shares soaring 16% during the trading day following the social network's earnings release. Beating estimates on every front, investors couldn't have asked for more from the company.

As the market digests exactly what Facebook's fourth-quarter performance means for the company's future, here's a simple list of six mind-boggling facts from the report.

2. Facebook now has 1.59 billion monthly active users and 1.04 billion daily active users. It's difficult to overstate what an asset these figures are. The company's network effect -- a competitive advantage that grows more powerful with every additional user -- is as strong as ever. 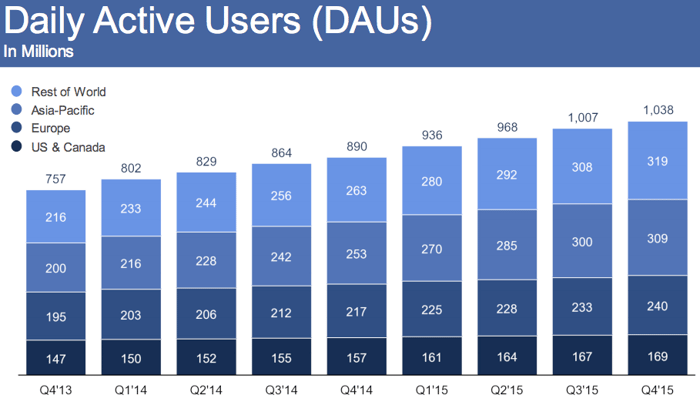 3. Q4 mobile advertising revenue soared 80%, year over year. Don't forget: There was a time when investors were doubting whether or not mobile could even be monetized effectively.

What was Facebook's free cash flow for the full year? More than $6 billion.

5. More than 100 million hours of video are watched daily on Facebook. This is an impressive statistic, and it helps investors take the company seriously when Zuckerberg noted during Facebook's fourth-quarter earnings call that the company is "exploring ways to give people a dedicated place on Facebook for when they just want to watch videos."

6. More than 1 billion people are using Facebook Groups every month. This is a testament to the social network's ability to bring together like-minded people, and it's yet another way the company is strengthening its network affect.

Sure, because Facebook stock trades at a premium, some investors may expect the company to be able to regularly outperform expectations; but these latest results from the company were downright exceptional. While the stock's pricey valuation continues to be difficult to stomach, making it difficult to justify buying shares, the company's outstanding execution isn't giving investors any reason to sell.