Please ensure Javascript is enabled for purposes of website accessibility
Log In Help Join The Motley Fool
Free Article Join Over 1 Million Premium Members And Get More In-Depth Stock Guidance and Research
By Adam Galas - Jan 28, 2016 at 9:15AM

Find out if dividend lovers should be worried about the long-term safety and future dividend growth of this renewable electric utility.

Market crashes are the best time to buy high-quality dividend growth stocks at bargain prices. Recently, Brookfield Renewable Energy Partners (NYSE: BEP), which until recently was handedly beating the total returns of the S&P 500, has seen its unit price collapse 26% since its March 2015 highs. 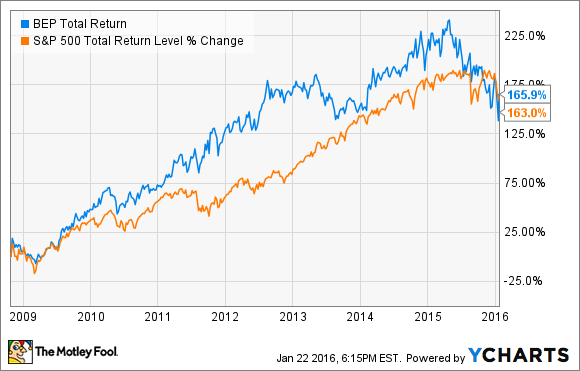 Let's see whether Wall Street's pessimism about Brookfield Renewable Energy represents a great long-term buying opportunity or if the market is signaling major problems ahead for the hydroelectric and wind yieldco.

While Brookfield Renewable Energy Partners may seem initially undervalued, both relative to its peers, its historical yield, and its impressive long-term payout growth potential, there is a major problem with this yieldco.

The third and most important aspect of a payout profile, the sustainability of the distribution, has a troubling track record that causes me to doubt management's rosy payout growth guidance.

... but rising yield is due to decaying payout profile quality

Brookfield Renewable Energy Partners has a policy of paying out 70% of funds from operations (FFO). While that makes the current distribution seem highly sustainable -- as does the fact that 92% of its cash flows are protected by inflation-adjusted contracts, with an average remaining length of 17 years -- that metric fails to take into account the maintenance costs needed to keep its dams and wind projects functioning.

Adjusted funds from operations (AFFO), which factors in maintenance costs) is what investors need to keep an eye on, and in the first three quarters of 2015, the yieldco's AFFO payout ratio was unsustainably high.

One reason for this is that hydroelectric dams and wind-farm power generation can be highly variable. In recent quarters, Brookfield Renewable Energy's wind farms have generated below historical average power, and its Canadian and Latin American dams continue to underproduce because of historically low rainfall and an ongoing drought, respectively.

When combined with customer renegotiations for expiring contracts, 2015's Q1-Q3 AFFO per unit declined by 17%. This situation should potentially worry investors, because between 2015 and 2019, 10% of Brookfield Renewable Energy's contracts are up for renegotiation.

Given both the variable nature of hydroelectric and wind power and the long-term trend in declining electricity prices, the only way for management to hit its long-term growth targets is to keep growing and diversifying its asset base.

This situation might grow AFFO fast enough to secure the current payout and allow its continued growth. This will likely come from a combination of organic growth investment and acquisitiond. Such deals are put together by the yieldco's sponsor and general partner, Brookfield Asset Management (NYSE: BAM), like the recent deal to acquire 57.6% of Isagen and its hydroelectric dams in Columbia. Brookfield Renewable Energy will pay $517 million for a 25% stake in Isagen.

However, there are two major risks to Brookfield Renewable Energy's growth opportunities. First the yieldco's high leverage ratio means it's likely to face rising debt costs. Second, its trailing-12-month return on invested capital is negative, indicating that as it grows, the yieldco will destroy investor value.

Last year's Q3 ROIC came in at a much better 12.93%. However I'd have to see a few more quarters of such high profitability before I felt comfortable investing.

Bottom line
While I don't believe that Brookfield Renewable Energy Partners' payout is in any immediate danger of being cut, the risks facing the yieldco do call into question management's optimistic payout growth and total return guidance.

If you already own units, then I wouldn't necessarily recommend selling. However, it's probably best to refrain from adding to or opening a position until management is able to prove it can do two key things: generate sufficient AFFO per unit to cover the current distribution and raise its return on invested capital above its cost of capital. If it can do that it will be in much better shape.