The keys to managing conglomerates are leadership and discipline. If this isn't a truism, it ought to be, yet few of them consistently get it right. Success requires finding a balance between micromanagement and disorder, between leveraging centralized power and fostering entrepreneurialism in the field, between targets and facts on the ground. One company that is doing it is Honeywell International (NASDAQ:HON).

This wasn't always so. Honeywell was thoroughly disrupted, first through being acquired by Allied Signal in 1999 (the merged group retained the Honeywell name), the acquisition of Pittway the next year, Honeywell's acceptance of General Electric's bid to acquire it a few months later, and finally the European Union's rejection of that deal on competition grounds in 2001. In the space of 25 months, the company had the stuffing knocked out of it. It was left without a strategy, in a state of internecine warfare among management factions, and, after the board dismissed him, without a CEO.

In a period that has been kind neither to industrials nor to conglomerates, Honeywell's recovery has been remarkable: 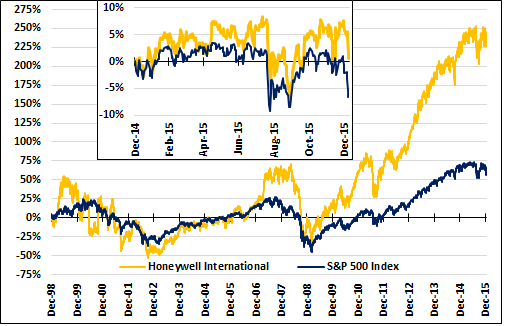 The new CEO's leadership receives much of the credit for this. As an outsider (ex-GE), David Cote was neutral in Honeywell's turf wars. He saw that diversity could be a strength for a company with the resources to consolidate fragmented businesses, and he established a culture of control through the financial function that allowed disparate units considerable commercial autonomy. The company began an aggressive program of small to medium-size acquisitions, building out all aspects of the group. More than 75 acquisitions and 50 divestments later, the company has been transformed, although still recognizably concentrated on its three core business areas:

This record has caused some to argue that Honeywell should be more aggressive and make large purchases. However, last year's $5.1 billion purchase of Elster GmbH, a German water and power meter manufacturer, is the largest under Cote's tenure and perhaps the largest it will make:

An example is Honeywell's acquisition of Sigma-Aldrich's fine-chemicals business, in connection with the latter's acquisition by Merck KGaA. Honeywell already did much of the manufacturing for Sigma-Aldrich. Both this and the Elster acquisition indicate that there are numerous attractive opportunities for Honeywell in private markets (it is buying Elster from Melrose PLC). Shareholder activism, which generally opposes conglomeration and encourages spin-offs and divestitures, plays into Honeywell's hands.

And, largely through internal initiatives, the company is gradually transforming many of its businesses from providers of product to service providers, including aftermarket maintenance and software support. You don't have to buy into the idea of a "smart home" (many apparently don't) to realize that Honeywell has numerous opportunities in a connected world. The purchase of Elster increases them. Services accounted for 20.5% of nine-month revenue, and while product revenue declined 6.1% from the same period in 2014, services eked out a 0.6% increase. Services are attractive because they are less cyclical and have higher normalized growth rates than manufacturing; while they have somewhat lower margins (at least currently), they are less capital intensive.

Honeywell has struggled to raise its margins to levels comparable to its peers, and while expansion in services may add to the challenge, it's coming within sight of that goal. The five-year plan it launched in 2014 calls for pre-tax margins of 18.5% to 20% from each division by 2018 -- levels already exceeded by two of them. Margin improvement is probably good for $250 million to $500 million in additional annual pre-tax income by 2018.

Honeywell expects organic sales growth of 3.5% to 5.5% over the period, and to deploy $10 billion in acquisitions, acquiring $5 billion to $8 billion in sales and bringing total revenue to $50 billion. These are aggressive targets, particularly for the revenue line, and perhaps they are what have inspired analysts to expect larger acquisitions. However, Honeywell should be able to achieve them without taking such a risk, and it will be a stronger company for doing so. Honeywell has been closely correlated with the S&P 500 index over the last two years: If it can deliver on this promise, it should be able to outperform significantly.