Please ensure Javascript is enabled for purposes of website accessibility
Log In Help Join The Motley Fool
Free Article Join Over 1 Million Premium Members And Get More In-Depth Stock Guidance and Research
By James Sullivan - Jan 28, 2016 at 9:12AM

The market is giving investors the chance to buy Apple with more than a 2% yield. This is too good of an opportunity to pass up.

Apple's (AAPL 1.26%) dividend yield is only around 2%, but through a combination of share buybacks and raises, it has the potential to become one of the most lucrative dividend investments around.

Current yield and stability
Apple has fallen under $100 a share. As a result of the drop, the company now sports a dividend yield over 2%. This is one of the most stable dividends in the market, backed by a net cash position of around $150 billion and tens of billions of dollars of annual earnings. 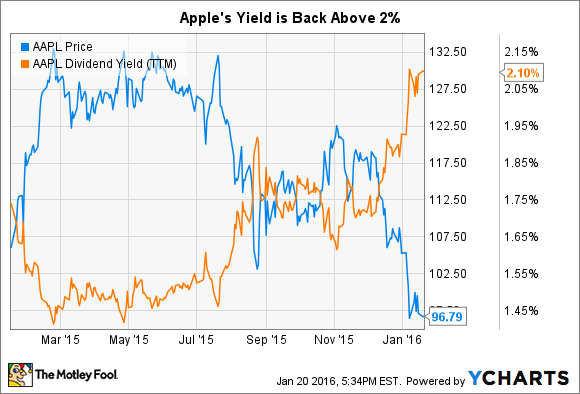 Apple may not offer the same rate of growth that it once did, however, it makes up for this with a combination of rock-solid earnings, dividends, and share repurchases. This implies that its future returns will come with less risk than buying shares in 2000, 2005, or even 2010 did. It's now a perfect time -- with the share price close to 52-week lows -- to consider picking up some Apple.

An increase around the corner?
Apple began paying a dividend in August 2012, has paid it every quarter since, and has raised it each May. It was bumped 15% in 2013 followed by yearly increases of 7.8% and 10.6%. The company currently pays $0.52 per share on a quarterly basis. Let's look at what your yield would be in May if you pick up shares now.

Yield on cost
Imagine that you buy 100 shares of a company that trades for $10 per share and pays a $0.025 quarterly dividend (or $0.10 annually). It then appreciates 10% per year and raises its dividend payment 10% per year as well. After five years, it would trade for $16.11 and the annual payout would be $0.161. Someone looking at the stock then would see the same 1% yield that you saw when you bought shares five years earlier.

For you, the story is different. Assuming you didn't reinvest your dividends into more shares, which would further magnify returns, you would receive a yearly payment of $16.10 on your initial investment of $1,000. Your yield on cost for this position is now 1.61% to go along with $611 of capital gains. If you continue to hold and the company raise its payout further, this yield on cost will continue to increase. Buying Apple shares now and holding on for the next five to 10 years, and ideally longer, will allow you to experience this phenomenon for yourself. 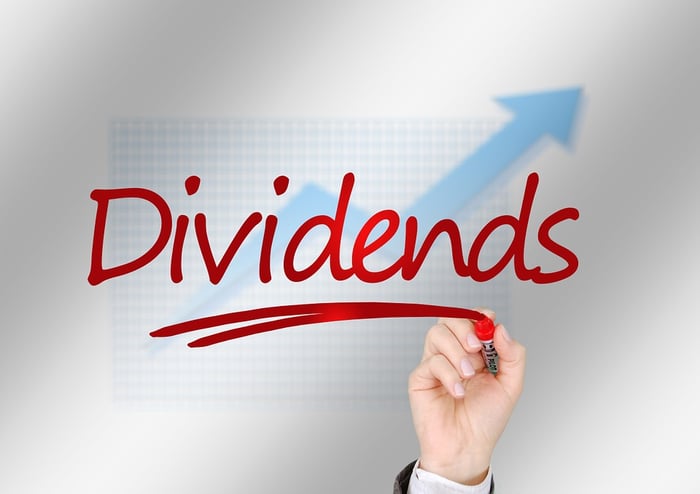 Buybacks now, (bigger) dividends later
Apple is spending significantly more on share repurchases than dividends at the moment. This approach is great news for long-term income investors, for a few reasons.

Apple management believes that shares are undervalued and that buybacks are the best way to increase shareholder wealth. If shares are undervalued, then a buyback benefits remaining shareholders. Existing earnings are spread over a smaller base of shares, which leads to higher earnings per share. Apple should continue to focus on this approach while shares remain cheap.

Retiring shares has a direct benefit to income-seeking investors. Every share that Apple retires is one less dividend payment that the company must make every quarter going forward. If there are 100 shares outstanding and the annual payout is $1, then $100 leaves the company treasury each year for dividend payments. If 10% of outstanding shares are repurchased and retired, then only $90 must be paid in dividends, or the company can choose to allocate the "saved" $10 among the remaining 90 shares. Now each share is entitled to receive $1.11 instead of $1. This benefit becomes even more pronounced as the dividend continues to grow and the company realizes years of savings.

Through Q4 2015, Apple has bought back shares amounting to $104 billion while paying out "only" $35.7 billion in dividends. At some point, shares will no longer be cheap and management will begin to reverse these numbers. This situation may happen soon or may take many years, but at some point, shares will become fully valued, there will be no more shares left to repurchase, or the company will be taken private. It's not crazy to envision a doubling or tripling of the payout simply from a management decision to focus on dividends over buybacks.

Buy now for a huge dividend return
A share today has a yield of around 2.15%. In May, the yield on the initial purchase should be somewhere between 2.25% and 2.4%. Yearly raises in the range of 8% to 15% will continue to increase yield on cost, while a lowered share count will make it easier and easier for Apple to deliver substantial increases.

It's not hard to envision having a yield on cost of 5% to 10% or more in 10 years. The existing product line should allow Apple to deliver high-single-digit earnings growth, while new products and services might bump that figure higher. This situation should lead to market-beating returns over the long run. Apple is poised to become one of the best dividend stocks for the next 20 years, and I recommend taking a look at picking up some shares today.