Rockwell beat analyst expectations in the quarter, but the future is the bigger problem

Rockwell Automation (ROK 2.37%) posted adjusted earnings of $1.40 a share in its fiscal first quarter, down 9% year over year. Revenues were lower by a little over 9%, too, coming in at $1.43 billion. While those numbers beat analyst expectations of $1.33 in earnings and $1.38 billion in revenue, the company's expectations for the rest of the year are the real takeaway here.

Headwinds remain
Rockwell's fiscal-first-quarter results really had two key components. The first was foreign currency translation. With roughly 45% of revenues derived from outside of the United States, this can be a big issue. To give you an idea of how big, the automation specialist estimates that roughly two-thirds of its revenue decline was attributable to the impact of currency movements. But there's not a lot that globally diversified Rockwell can do about that, so you need to take that hit with a grain of salt.

The more troubling factor affecting results was a decline in organic sales. After stripping out the impact of currency changes, the company's sales declined a little over 3% year over year. Weakness wasn't confined to one area of the business, either, with both the Architecture & Software and Control Products & Solutions businesses seeing organic revenue declines.

Commenting on the quarter, CEO Keith Nosbusch explained, "As expected, we had a weak start to the fiscal year, with organic sales down 3% due to challenging market conditions in the U.S. and Asia Pacific. Heavy industry end markets continued to soften globally, particularly oil and gas in the U.S." Although he highlighted growth in a couple of global markets, the "continued weakness" is where the problem lies for the future.

Trimming expectations
The CEO continued, "Since providing guidance in November, oil and commodity prices have further deteriorated, and projections for economic growth including industrial production have softened. As a result, we are lowering the midpoint of our organic growth guidance by one point." That pushes the company's revenue guidance to around $5.9 billion, with the earnings guidance range lowered to a range of $5.70 to $6.20.

The margin trouble at Rockwell is showing up in Architecture & Software. Source: Rockwell Automation.

Rockwell's previous guidance was for $6 billion in revenue and earnings between $5.90 and $6.40 a share. So the change on the top line wasn't huge, but the bottom-line impact is far more notable. The reason for this earnings pessimism is likely because fiscal-first-quarter segment operating margin declined to 20.7% from 22% a year ago because of notable weakness in the company's Architecture & Software business. In other words, the tough market has made it harder for Rockwell to get money from the top line to the bottom line.

Industrial pain
To be fair, Rockwell is still making plenty of money. Really, it's kind of hard to complain about a company that can earn around $6 a share in a bad year. So it isn't as if long-term investors need to be worried about solvency. But the current market is a difficult one, and you'll need to keep that in mind. For example, industrial conglomerate Eaton Corp. (ETN 2.00%) started out calendar year 2015 expecting organic revenue growth of around 4%. By the third quarter it had already dropped that number to a decline of 1%. So it's bad all around. 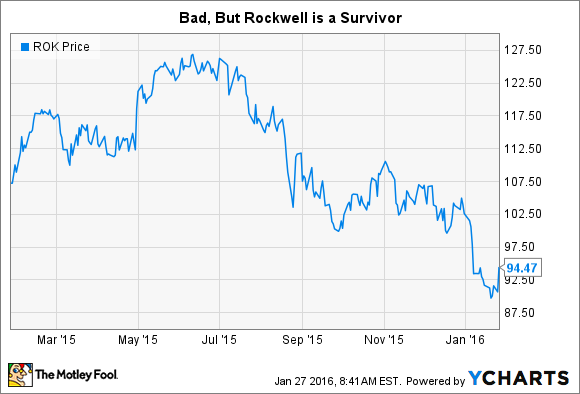 As you read Rockwell's fiscal-first-quarter review, note that the quarter was weak year over year, even though it beat analyst expectations. That's important, because the rest of the year looks like it will be equally as hard, which helps explain why investors have pushed the shares down around 25% from their early 2015 highs.

But for long-term investors, this could be a buying opportunity. Clearly, the shares could go lower, particularly if the year progresses on as dour a note as Rockwell seems to be projecting. So this isn't a back-up-the-truck moment. But this could be a good time to start accumulating a solid company that's working through a tough market.

Reuben Brewer owns shares of Eaton. The Motley Fool has no position in any of the stocks mentioned. Try any of our Foolish newsletter services free for 30 days. We Fools may not all hold the same opinions, but we all believe that considering a diverse range of insights makes us better investors. The Motley Fool has a disclosure policy.

3 Passive Income Stocks to Look at While There's Still Time