Please ensure Javascript is enabled for purposes of website accessibility
Log In Help Join The Motley Fool
Free Article Join Over 1 Million Premium Members And Get More In-Depth Stock Guidance and Research
By Tyler Crowe - Jan 28, 2016 at 9:45AM

The oil services provider has done a lot in the past couple years to become a competitive company again. Now only if the oil and gas market would cooperate with it.

Weatherford International (NYSE: WFT) is a rather curious case for investors. Ever since the financial crisis in 2008, the company's shares have slowly declined as the company has struggled to turn a profit thanks to a bloated cost structure. Then, just as the company was starting to significantly address these issues with a major restructuring, oil prices started their long decline from over $100 a barrel to the $30 a barrel range we're in today. 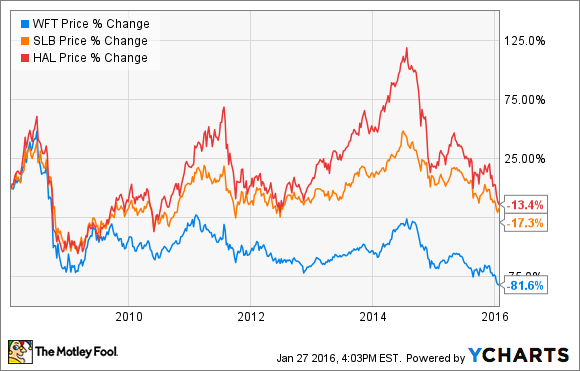 After so many years of poor financial performance, it would be understandable if 2016 turned out to be another dud for the company. But surprisingly, there are some reasons to think this year might be a better one for the company despite the miserable operating environment.

At least we have something to show for it
2015 was rough year for Weatherford and everyone else in the oil services space. At the begining of the year, oil prices were in the $50 range and dropping fast. That led oil producers to scale back their capital budgets -- you know, those things that are the lifeblood of oil services companies. As a result of these cutbacks, revenue and EBITDA at Weatheford and its larger peers Schlumberger (SLB 0.68%) and Halliburton (HAL -0.07%) fell off a cliff. 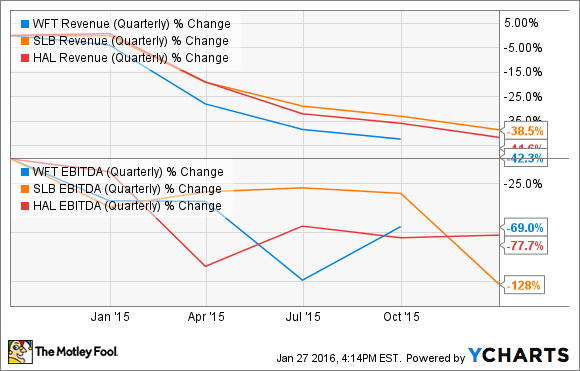 As bad as it sounds, there is one aspect where Weatherford can actually hold its chin up. During this decline, its margins have declined the least among its peer group. A large part of the reason for this is that the company had been hacking off large chunks of its cost structure for more than a year before oil prices started to roll over. In fact, thanks to these cuts, the past 12 months have been the first four consecutive quarters where the company has generated more operational cash flow than its capital expenditures since 2010.

So, beneath all of the havoc oil prices have wreaked on Weatherford's financials over the past 18 months or so, there are actually signs of a company that could be profitable when oil and gas activity starts to pick back up again.

Patience is a virtue
The only problem with waiting for that oil and gas activity to pick back up, though, is that we will have to wait for oil and gas prices to be much higher than the $30 a barrel we see today. At these prices, there is very little incentive for producers to spend any more money than last year. Chevron (CVX 0.14%), one of the largest spenders in the space, has already made it clear that in 2016, its capital expenditures will be 20%-30% less than what they were in 2015. 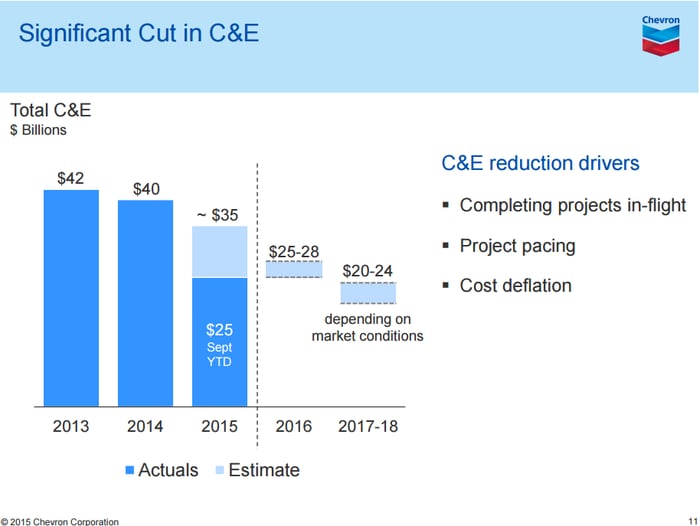 This trend is rather common across the entire industry, and most analyst groups estimate that we will see capital spending decline 20%-25% compared to 2015. A decent portion of that lower spending will lead to not only less contracted work for Weatherford, but it will also likely result in lower rates for contracted work.

All of this together means 2016 won't be a pretty one for Weatherford, and management has even said it expects 2016 to be a real stinker. So, investors shouldn't get their hopes up that they'll be reaping all of the rewards from the company's cost-cutting efforts any time this year.

What a Fool believes
For Weatherford and its peers, 2016 will all be about preservation: preserving the balance sheet so its future results aren't dragged down by debt today, and preserving its best people and equipment so it can be ready to serve the oil patch when drilling activity picks back up again. Thanks to Weatherford's restructuring, it actually has a chance of doing just that. It may not be this year, but when the market does turn, Weatherford could finally put its years of declining share prices behind it.

The Motley Fool owns shares of and recommends Halliburton. The Motley Fool recommends Chevron. Try any of our Foolish newsletter services free for 30 days. We Fools may not all hold the same opinions, but we all believe that considering a diverse range of insights makes us better investors. The Motley Fool has a disclosure policy.