Please ensure Javascript is enabled for purposes of website accessibility
Log In Help Join The Motley Fool
Free Article Join Over 1 Million Premium Members And Get More In-Depth Stock Guidance and Research
By Daniel Sparks - Jan 29, 2016 at 9:35AM

With the company's fourth-quarter results now available for investors to mull over, here's a look at the company's full-year performance. Hint: Amazon crushed it.

With Amazon's (AMZN 2.07%) fourth quarter now behind it, investors can put some figures to the four quarters in 2015 that helped the e-commerce giant's stock soar about 57% during the trailing 12 months -- even after the stock's pullback on Thursday. Not surprisingly, the numbers behind the year's performance look just as impressive as the stock's gain during this period.

The box we all love to arrive at our door.

1. Operating income increased from $178 million to $2.2 billion.
It's no secret that Amazon CEO Jeff Bezos is more than willing to forgo profits in the name of growth.

"Your margin is my opportunity," Bezos has said.

But keen investors have been watching a rising gross profit margin in anticipation of fatter profits in the future, and 2015 looked like the beginning of that future. 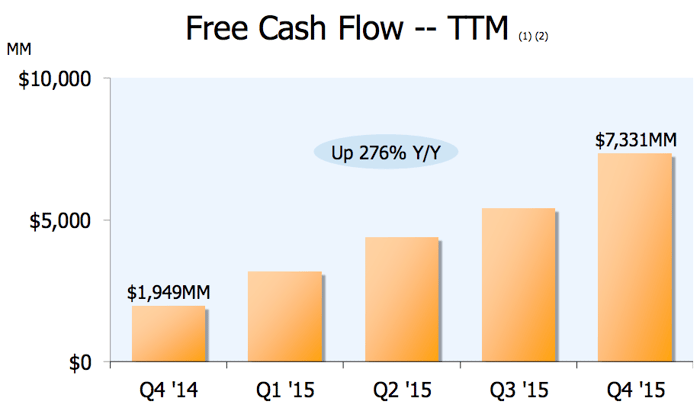 3. EPS increased from $0.52 to $1.25. While $1.25 is still paltry in relation to the company's approximate $550 share price, it's an important start and offers hope for investors holding for the long haul.

4. Net sales increased 20% -- or 26% when adjusting for currency headwinds. Sales were driven by a 47% year-over-year increase in service revenue and a 13.1% increase in product sales.

6. Amazon Web Services saw an aggressive product roadmap. Also known as AWS, which is the company's business that leases computing power to large customers such as Netflix, announced "722 significant new services and features" during 2016 -- a 40% increase over 2014.

8. Amazon's operating margin of worldwide net sales increased sharply. The important metric increased from a measly 0.2% in 2014 to 2.1% -- getting the company into more respectable territory on its aggressive retail business.

While investors are obviously pleased with the year overall, given the stock's significant rise in the trailing-12-month period, the fourth-quarter results were worse than investors expected, sparking a sell-off in the stock. Analysts had expected the company to report $36 billion in revenue and $1.56 in EPS for the quarter; Amazon instead reported $35.7 billion in revenue and $1 in EPS.

But, even after Friday's sell-off, long-term investors were still rewarded handsomely during 2015 for the company's excellent performance thanks to the stock's crushing performance throughout the year.

Daniel Sparks has no position in any stocks mentioned. The Motley Fool owns shares of and recommends Amazon.com and Netflix. Try any of our Foolish newsletter services free for 30 days. We Fools may not all hold the same opinions, but we all believe that considering a diverse range of insights makes us better investors. The Motley Fool has a disclosure policy.