It's a double dose of bummer news for shareholders today.

What's happening?
Gilead Sciences (GILD 0.62%) announced today that longtime CEO John Martin will be moving out of the corner office and taking on the role of executive chairman of the biotech giant. Replacing Martin will be Gilead's current president and COO, John F. Milligan. The transition is scheduled to go into effect on March 10, 2016.

John Martin has led Gilead as CEO for the past 20 years, and under his stewardship, the company has developed and delivered therapeutic advancements to millions of people around the world. His legacy is clear -- and the vision he has set will continue with his contributions as Executive Chairman.

Does it matter?
There's no doubt that shareholders have benefited greatly from Martin's 20-year run at the top. Anyone smart enough to buy shares when he took over as CEO has enjoyed one heck of an impressive run, as shares have gone up by more than 8,000% under his watch. 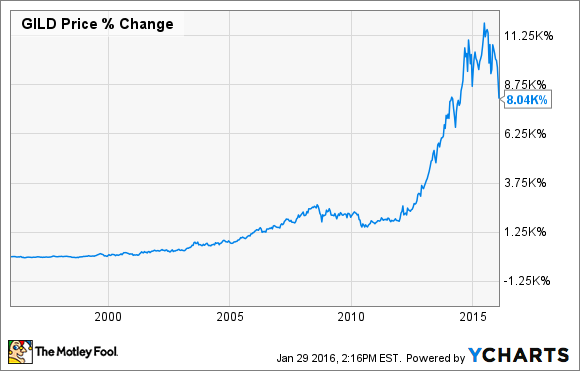 Navigating through a leadership change is always challenging, but it looks like Gilead is doing everything correctly to ensure a smooth transition. Martin will still play an active role in shaping the company's future, and the incoming CEO looks like a great choice.

Still, the company picked a rough day to make this announcement. Shares of Gilead were already trading lower on the news that Merck's (MRK 1.10%) new hepatitis C drug Zepatier won Food and Drug Administration approval on Thursday night. While the news of the drug's approval wasn't all that surprising, the announced pricing was a bit shocking. Merck priced Zepatier at $54,600 for a 12-week course, which represents a 42% discount to Gilead's Harvoni. That huge discount could put huge pressure on Gilead to lower its pricing for its hepatitis C treatments, which would weigh heavily on the company's financial statements. After all, Gilead's hepatitis C products comprised more than 58% of its total revenue last quarter, so investors have reason to be nervous. That puts even an even bigger burden on the company to deliver some good news when it reports its fourth-quarter earnings next week.

Farewell, Dr. Martin. This shareholder is sad to see you go.