Assessing how Charles Schwab will balance growth, capital, and dividends in the year to come.

This month, the Charles Schwab Corporation (SCHW -0.20%) reported a quarterly record in net income at $416 million. For the 2015 fiscal year, revenues rose 5%, net income grew 10%, and core assets increased by $134 billion. That was the fourth consecutive year growth in core assets exceeded $100 billion. The company's capital base was strong as well, with its tier one leverage ratio well above regulatory guidelines at 7.1%.

By all measures, the company knocked it out of the park in 2015. Yet it didn't raise its dividend at all.

Perhaps the exceptional fourth quarter could be a harbinger for a dividend raise in 2016, you ask? Maybe, but I tend to think not. Here's why.

Where does Charles Schwab Corp.'s dividend stack up?
Since the second quarter of 2008, Schwab's dividend has been stable at $0.06 per common share, paid quarterly.

On a trailing-12-month basis, the common share dividend paid has ranged from over 60% of net income to where it is today, just above 27%. Based on the stock's price at the time of this writing, the dividend yields 0.93%, well below the average yield of the S&P 500 at 2.31%.

Schwab's dividend, on the other hand, has yielded less than 1% for a most all of the last 25 years. The spikes above that level were driven more by steep price declines related to the financial crisis and great recession than any change in the actual dividends paid. 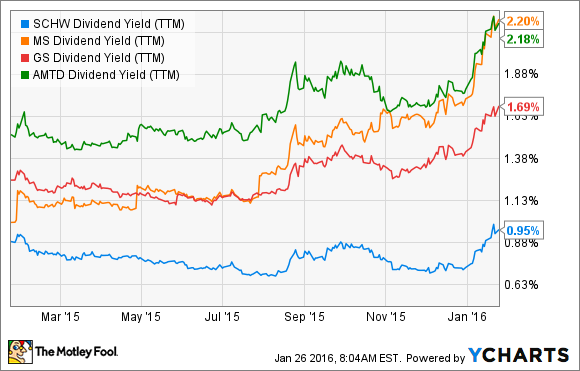 Among its peers, Schwab's 27% payout ratio is higher than only Goldman's 21.5%. Morgan Stanley and TD Ameritrade both payout considerably more of their profits at 37.5% and 40%, respectively. Schwab yields less, because its management choose to pay out less.

The choice to pay a low dividend is strategic and won't change in 2016
At this point in our assessment, we've found that Charles Schwab Corp.'s fundamentals appear capable of supporting a higher dividend, and there's precedent among their competitors to return a higher percentage of profits to investors. Even still, I don't see higher dividends in store for Schwab investors in 2016.

The biggest reason for that view is growth. I think about Charles Schwab stock as a growth play, and fast growth requires capital. Since the last time Schwab raised its dividend, its total assets have increased 252%. That growth rate dwarfs the numbers being reported from many of its competitors, both large and small. 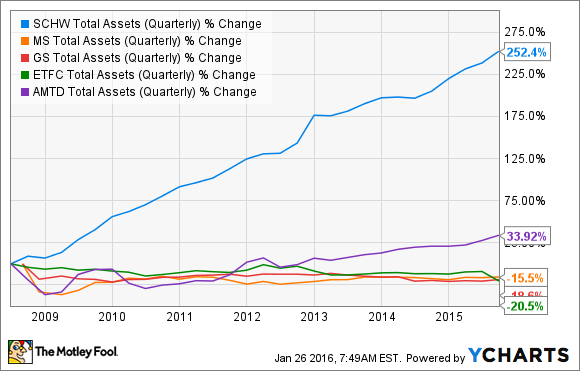 Growing this fast requires the company to simultaneously grow its capital base to support its new assets, and that means keeping much of its earnings within the business. For Schwab, the company's tangible book value has increased 207% since the last dividend hike in 2008.Reinvesting its profits into the company keeps the balance sheet strong, and it drives the investments in the core business to keep the growth engine running full steam ahead.

In the company's interim business update for the fourth quarter, CFO Joe Martinetto hammered home the company's 2016 strategic priorities, all of which support this theory. The company is working from a "more conservative expense plan" with the goal of ensuring a "meaningful capacity to spend on revenue generating/enabling projects." In other words, the company thinks that its capital will generate a higher return being invested back in the business rather than paid out as dividends. It's a focus on finding ways to grow, prioritizing profits, and protecting the balance sheet.

Could management at Charles Schwab achieve these objectives and also increase the dividend? I think financially the company could likely afford to do that. I just don't think they will. Schwab's strategic decision making is driven by CEO Walt Bettinger's "through client eyes" culture. Through the client's eyes, any extra capital is better served through investments in new technology, new investment products, and better ways to improve the client experience. These initiatives drive growth, which to me is the company's clear priority.

Jay Jenkins has no position in any stocks mentioned. The Motley Fool owns shares of and recommends TD Ameritrade. Try any of our Foolish newsletter services free for 30 days. We Fools may not all hold the same opinions, but we all believe that considering a diverse range of insights makes us better investors. The Motley Fool has a disclosure policy.