Dividends are great. UnitedHealth Group's (NYSE:UNH) stock closed out 2015 down a little over 2%, but because of the large health insurer's dividend payments, shareholders nearly broke even for the year. Could UnitedHealth's dividends be even greater in 2016? I think it's likely. Here are three reasons why.

1. It's got the money
Dividend payout ratio is perhaps the best predictor as to whether a company will raise its dividends in the future. If a company is already paying out a large percentage of its earnings in the form of dividends, increasing that payout is tougher to do. On the other hand, if that percentage is relatively small, the company can afford to reward investors with higher dividends.

In UnitedHealth's case, the latter scenario applies. The insurer's dividend payout ratio currently stands below 28%. That low ratio clearly shows that UnitedHealth can afford to hike its dividend -- at least based on past earnings performance.

2. It's got the growth
The caveat about the payout ratio being based on past earnings performance is important. If earnings plunge, a company might not be able to increase dividends, and sometimes can even be forced to cut dividends. That's why future earnings potential is key to determining whether or not a given company might raise its dividends.

There doesn't appear to be any reason for UnitedHealth Group investors to worry. The company is expected to boost earnings from $6.45 per share in 2015 up to at least $7.60 per share in 2016. Is that solid double-digit earnings growth achievable? I think so.

UnitedHealth has hedged its bets on participating in the Obamacare exchanges because of losses in 2015. It's quite possible that the insurer will announce later this year that it will pull out of most or all exchanges.

I also think that the merger of Anthem (NYSE:ANTM) and Cigna (NYSE:CI) will create some opportunities for UnitedHealth. In particular, UnitedHealth seems poised to pick up new business from self-funded organizations.

Last, but certainly not least, UnitedHealth should be able to count on steady growth from its Optum subsidiary. Pharmacy benefits manager OptumRx has been on a tear over the past few years. The recent acquisition of Catamaran should help keep the momentum rolling in 2016.

3. It's got the history
It seems reasonable to expect that a company that has a history of raising dividends in the past would be fairly likely to keep on raising dividends if it can. UnitedHealth's recent history shows that the company has consistently increased dividends. 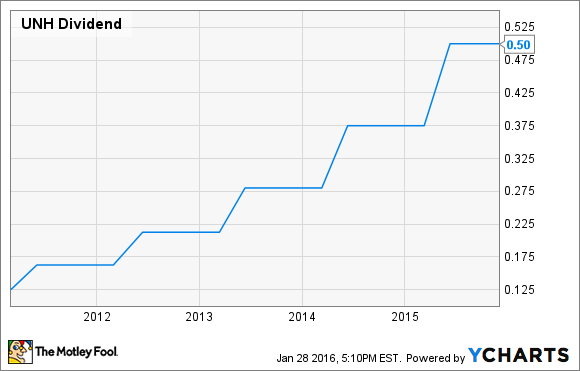 Just because UnitedHealth hiked its dividends over the last few years doesn't guarantee that it will do so in 2016. But like Mark Twain reputedly once said, "History doesn't repeat itself, but it does rhyme."

In my view, UnitedHealth's dividend trend shows that the company's board and management team place a high priority on dividend payments. That's important. When dividends are a priority for a company, it's more likely to find ways to increase them.

Keeping up with the Joneses
There is one more factor to consider, which may be less important but is still noteworthy. UnitedHealth has consistently raised its dividend in recent years, and has a low payout ratio, but the company's payout still lags a little behind that of rival Anthem. UnitedHealth's dividend yield currently stands at 1.76%, while Anthem's yield is 1.82%.

Anthem's payout ratio of 22% is even lower than UnitedHealth's, so the company should be able to easily afford its own dividend hike. And with Anthem and Cigna planning to merge, the combined company should have even more money to return to shareholders in the form of dividends. Cigna's dividend yield is a paltry 0.03%. The insurer's payout ratio is a super-low 0.49%.

Ultimately, I think UnitedHealth's shareholders will see higher dividends this year. The company has the money. It has the growth. It has the history. And with Anthem likely to also hike its dividend in 2016, I suspect UnitedHealth will want to "keep up with the Joneses" to some extent.