Please ensure Javascript is enabled for purposes of website accessibility
Log In Help Join The Motley Fool
Free Article Join Over 1 Million Premium Members And Get More In-Depth Stock Guidance and Research
By Tyler Crowe - Jan 30, 2016 at 8:15AM

As the company's realized oil price slipped below $40 a barrel in the fourth quarter, so too did Chevron's profits.

We all pretty much knew coming into the quarter that Chevron (CVX 1.82%) was not going to put up great results, but I'm not sure many were expecting to see the company post its first quarterly loss since 2002. As with all companies, it's worth looking beyond just the headline numbers, so let's see where those losses came from and what the company is doing to hopefully prevent too many repeat performances of this quarter in 2016.

Chevron's results: The raw numbers
As you might expect, the price of oil has done some large damage to the company's revenue and earnings stream. For the fourth quarter, the company's realized price per barrel was $37 and gas prices weren't that much better. All of this resulted in a revenue decline of 36% year over year.

For much of 2015, the company's downstream operations were able to make up for some of the shortcomings of the upstream side of the business. This quarter, though, the losses on the U.S. upstream side of the business were simply too great, and downstream operations both in the U.S. and internationally didn't perform as well. Here's a quick breakdown of its earnings by business segment: 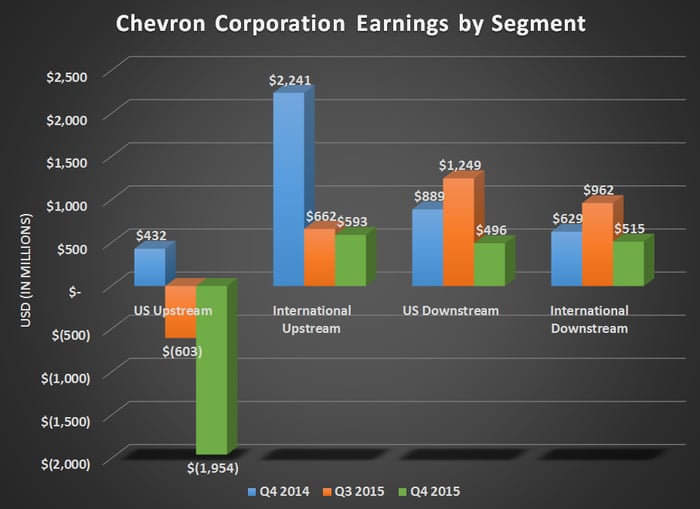 Those things don't exactly paint the prettiest picture, but the company's cash flow wasn't exactly anything better for the quarter, either: 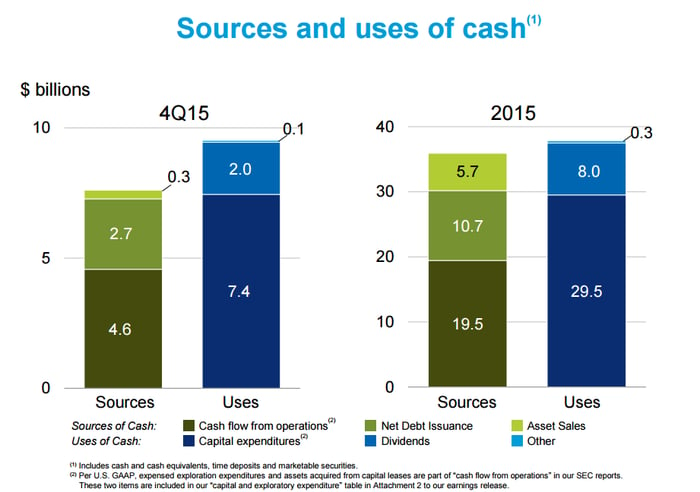 Even after executing $16.4 billion in asset sales and debt issuances, the company still fell a few billion short of meeting its capital obligations for all of 2015. That doesn't bode well heading into 2016.

What management had to say
The story at Chevron has been the same for well over a year now, and CEO John Watson echoed much of what he has said before. As the company brings some of its major capital projects on line, it will translate into significantly less spending and greater cash coming in the door.

We advanced our upstream major capital projects. We had first production from two deepwater projects in Africa, and ramped up production from Jack/St. Malo in the deepwater Gulf of Mexico and our shale and tight resources in the Permian Basin. We made significant progress on our LNG projects in Australia, in particular the Gorgon Project where we expect to be producing LNG within the next few weeks. Successful completion and start-up of these and other major capital projects will translate into significantly lower capital spending, higher production and growing cash generation in the months ahead.

Until Gorgon and Wheatstone are complete and are at full production, we can expect similar statements from management in the coming quarters.

Outlook
With little relief from oil prices in the first few weeks of this quarter, it's pretty safe to assume that, pending any major asset sales, the company will likely post another loss in the coming quarter. As part of its earnings presentation, it did give its 2016 capital budget guidance. It expects to spend $26.6 billion in the year, which is right in the middle of the estimates it was giving last year.

Going forward, investors should continue to see if Chevron can deliver on that total spend reduction that it's promising, getting its spend rate in the $50 billion to $53 billion range could go a long way in helping to preserve the balance sheet while unrelenting oil prices continue to pressure Chevron.