Coach (TPR 0.47%) reported earnings for the second quarter of fiscal 2016 on Tuesday, Jan. 26. Investors reacted with optimism to the news, sending Coach stock up by more than 8% on Tuesday morning. Let's take a look at the latest earnings report from Coach and what it means for investors.

The context
Coach was one of the hottest names in the handbags and accessories business until 2012-2013. But management made a series of mistakes, including over-expanding the store base and resorting to big pricing discounts to move the products from the shelves. This eroded the company's brand power, and consumers turned away from Coach toward trendier names such as Michael Kors (CPRI -0.68%)

The fashion business is notoriously fickle and competitive, and factors such as brand image and product differentiation play a major role in purchasing decisions. Both Coach and Michael Kors operate in the affordable-luxury pricing segment, and Michael Kors has taken a lot of market share away from Coach on the back of a more progressive image and more fashionable designs. In a sign of the times, Michael Kors surpassed Coach's revenue during 2015. 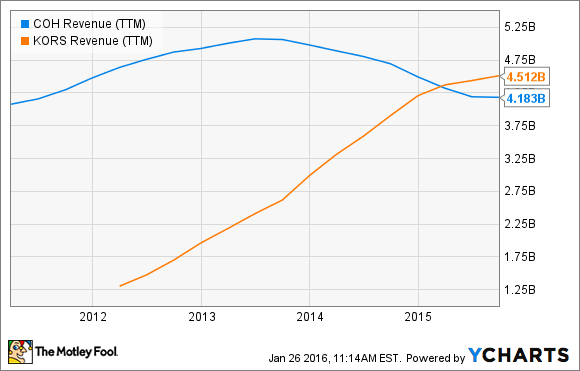 To reverse the situation, Coach is implementing a series of initiatives in areas such as stores, products, and marketing. Management is closing unprofitable stores and renovating units with a "modern luxury" design. Under the creative direction of Stuart Vevers, Coach is launching more sophisticated collections and trying to regain pricing power with reduced promotional activity. In addition, the company's marketing campaigns are now targeted toward younger and more fashion-conscious consumers.

The numbers
Fortunately for Coach investors, the company seems to be making solid progress. Coach reported its first year-over-year increase in revenue over the last 10 quarters, with total revenue growing 4% and reaching $1.27 billion during the period. Even better, the increase in constant-currency sales was a strong 7%.

Sales are still waning in North America, though: Total North America Coach brand sales declined 7% in U.S. dollars and 6% in constant currency, to $731 million. On the other hand, international sales grew 4% in U.S. dollars and 9% on a constant-currency basis, reaching $437 million. Sales in China, an important market for Coach, grew 5% in constant currency during the quarter, and sales from the recently acquired Stuart Weitzman brand amounted to $94 million.

Coach remains a remarkably profitable business. Gross profit margin came in at 67.4% of revenue, while operating profit margin was at 20.5% of sales. Adjusted earnings per share amounted to $0.68 during the quarter, and the number came in above Wall Street forecasts of $0.66 per share.

The future
The company ended the quarter with $438 million in inventory, which includes $29 million in inventory associated with Stuart Weitzman. This means that inventory declined 2% on a consolidated basis, and it fell by 9% for the Coach brand alone. Lean inventories are a major positive for investors going forward, as it shows that management is making the right merchandising decisions and the products are selling well.

Management reaffirmed its guidance for a low- to mid-single-digit increase in constant-currency revenue for the Coach brand during the full fiscal year 2016, and CEO Victor Luis sounded quite optimistic about the company's prospects for a sustained recovery:

As our momentum builds, we are targeting a return to growth for the Coach brand with continued improvement in comparable store sales, while Stuart Weitzman also drives top and bottom line results. We have a clear vision, a well-articulated strategy and a proven track record of execution. We remain confident that we can drive sustainable growth and best-in-class profitability for Coach over the long term

Positive sales data, healthy profit margins, and declining inventory levels are all indicating that Coach is making sound progress in turning the business around and positioning the company for growth over the coming years, so the latest earnings report from Coach brought some broadly good news to investors in the company.