Please ensure Javascript is enabled for purposes of website accessibility
Log In Help Join The Motley Fool
Free Article Join Over 1 Million Premium Members And Get More In-Depth Stock Guidance and Research
By Sean Williams – Jan 30, 2016 at 7:02AM

Few people would question Donald Trump's real estate acumen, but doing this instead with his fortune may have made "The Donald" billions of dollars richer than he is now.

Right now, Republican presidential hopeful Donald Trump might be the most polarizing figure in America. However, few people would deny that the business mogul has done well for himself during the past four-plus decades.

How Donald Trump made his fortune
Trump is one of five siblings, and he inherited quite the fortune from his father Fred Trump, who was a real estate developer himself. Fred Trump is credited with building a number of large, affordable-housing complexes in and around New York City.

When Donald Trump became president of his father's real estate company in 1974, it was estimated that Trump Management Co. was, at the time, worth approximately $200 million. In theory, this meant Donald, and each of his four other siblings, had an equal stake in the company worth about $40 million. Sources tend to differ on how much Donald Trump was worth as of 1974, although the figure is generally believed to be between $40 million and $200 million.

Trump is best known for increasing the value of his fortune through real estate deals and development. The Trump Organization currently has stakes in casinos, golf courses, residential housing, hotels, and resorts around the globe. He's made money by inking these deals, selling properties for a tidy profit, and by promoting the Trump brand itself. Donald Trump's time spent on The Apprentice and in other celebrity guest appearances only further enhanced the public recognition and appeal of his brand.

Today, Donald Trump, by his own account, is worth about $10 billion. Bloomberg and Forbes, though, place his wealth at a more "modest" $2.9 billion and $4 billion, respectively, as of 2015. Regardless of which number is correct, Trump seems to have amassed an impressive amount of wealth from his initial base in just 40-plus years.

This decision may have cost Trump billions
However, making a different move with his money may have actually netted Donald Trump an even bigger return.

Donald Trump generally prefers to invest in real estate -- and few would argue that he doesn't know what he's doing. But real estate, over the long term, may not be as strong of an investment as you think.

Between 1950 and 1997, it was an even slimmer 0.08% outperformance. We've only witnessed a divergence from this pattern over the last 18 years or so. In short, it means that, even though the value of real estate assets are rising, very little real wealth is being created because of the dragging effects of inflation.

On the flip side, the stock market has created substantial wealth over the same time periods, above and beyond the rate of inflation. Utilizing a dividend reinvestment price calculator from Don't Quit Your Day Job, if someone were to theoretically have held an index fund in the S&P 500 (^GSPC -0.16%) between January 1890 and January 1990, that index fund would, with dividend reinvestment, have outperformed the rate of inflation by 6.25% annually, or nearly 43,000% over the 100-year period.

According to Vox.com, had Trump invested his portion of company wealth in an S&P 500 index fund in August 1974, and held through August 2015, while fully reinvesting all dividends paid, he would have wound up with $3.4 billion when all is said and done. Vox.com notes that, if an annual fee of 0.15% were imposed -- nominal management fees are common with index funds -- and dividends were taxed, Trump's return would have dropped to $2.3 billion. In other words, based on Bloomberg and Forbes' estimations, Trump would be worth about the same as they peg his net worth today.

Utilizing a different date, though, yields remarkably different results. Vox.com points out that, if Trump had invested his roughly $200 million in net worth in an S&P 500 index fund in 1982, he'd have been worth $6.3 billion by August 2015 – and that's after fees and dividend taxes. Had Trump chosen 1988 to dump his fortune into stocks, he'd have $11.3 billion by August 2015.

A separate analysis from the Associated Press suggested doing so would have put Trump's net worth at $13 billion. The point here is that Trump's die-hard investments in an asset that's very difficult to make money in (real estate) may have cost him billions of dollars in real wealth creation.

You can outperform Trump, too
The conclusion reached by Vox is that Trump has generally underperformed the stock market since 1988. Understandably, there are a number of external factors here we aren't aware of, such as what Trump's actual wealth was at the time of the calculation. Additionally, the calculations are a bit arbitrary, because hindsight is 20/20, and timing the market over the long term is veritably impossible.

Nonetheless, the data suggests that the best way to generate real wealth over the long run -- i.e., investment gains above and beyond the rate of inflation -- is through long-term investing in the stock market.

This is a point that's been referenced often, but J.P. Morgan Asset Management, using data from Lipper, has unequivocally shown the importance of buying and holding over the long run. 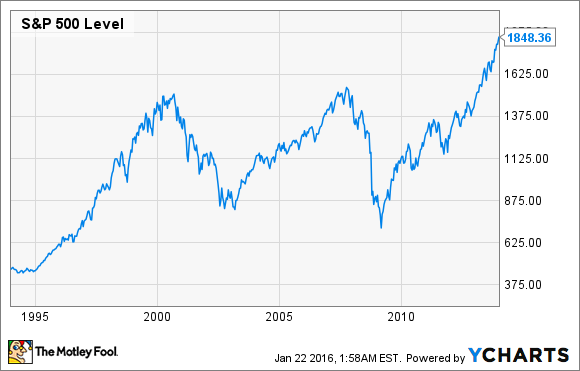 Your best bet to outperforming Donald Trump -- something that I believe most people reading this could honestly do -- is finding quality investments, preferably those that pay a dividend, and sticking with them for a long period of time.

The best part about investing in the stock market is that there's often an investment for everyone. Seasoned investors, and those seeking growth, can choose individual stocks, whereas more conservative investors have the luxury of choosing index funds or one of well over 1,000 electronic-traded funds, or ETFs. ETFs are funds that own a basket of stocks, sometimes well over 100, and they can help diversify your portfolio with even a small amount of money.

As Trump once said: "I like thinking big. If you're going to be thinking anything, you might as well think big."

Take his words to heart, and think big over the long run. If you do so, there's a good chance, in my opinion, that your portfolio will grow at a faster pace than Trump's net worth over the same time span.

Until You Learn This Investing Lesson, You Don't Know Anything
351%