Please ensure Javascript is enabled for purposes of website accessibility
Log In Help Join The Motley Fool
Free Article Join Over 1 Million Premium Members And Get More In-Depth Stock Guidance and Research
By Beth McKenna - Jan 30, 2016 at 8:11AM

Could the stock of the leading 3D printing company bounce back from two tough years and post returns greater than 158%?

While the stock-price swings of the past four years have been extreme, major volatility has been par for the course for Stratasys, at least in the past 10 years. Few investors probably realize, for instance, that Stratasys' stock plunged 58% in 2008, before going on to gain 60% in 2009. It then, of course, went on to eventually hit an all-time high in January 2014. 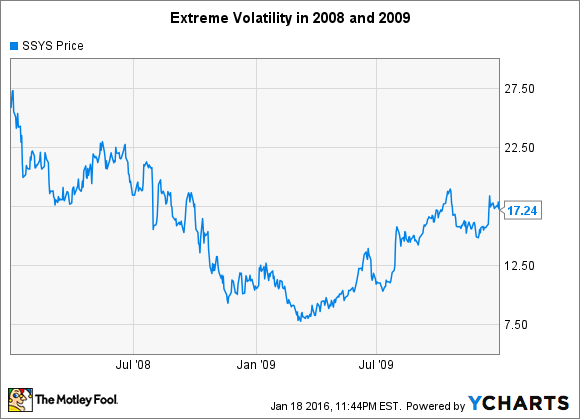 So, could 2016 possibly be Stratasys' best year yet?

Why Stratasys' business performance won't be its best yet in 2016
Stratasys' business performance this year will likely be subpar primarily because the macroeconomic headwinds it has faced in its core enterprise business starting in 2015 will probably continue into 2016. There's no reason yet to believe anything has improved on this front, though we'll learn more when Stratasys reports its fourth-quarter 2015 results.

Stratasys has attributed the major slowdown in purchasing among industrial customers to overcapacity in the field due to the large number of 3D printers snatched up during the previous few years. The company has stated that it doesn't have any indication that businesses are holding off purchasing new 3D printers to see what compelling new products might come to market in the near future. However, it's certainly possible that at least some companies are delaying their buying decisions for this reason.

The second key reason Stratasys' business performance this year will likely fall short is MakerBot. The desktop 3D printing unit imploded in 2015. While it's likely MakerBot sales would have slowed somewhat anyway, Stratasys' actions surely moved up the time frame of a slowdown and intensified the drop-off in sales. The company released the fifth-generation Replicator before it should have, as evidenced by widespread issues involving faulty extruders on the model.

Stratasys took goodwill impairment charges for MakerBot in 2015 totaling more than the $403 million it initially paid for the company in 2013. While the huge hit to Stratasys' earnings from these writedowns may be behind us, the weak sales are likely to continue into 2016. Furthermore, Stratasys is still reorganizing MakerBot -- and this activity will probably negatively impact Stratasys' earnings in 2016.

Short of Stratasys surprising the market by releasing an entirely new and extremely innovative 3D printer in 2016, there is no chance Stratasys' business performance in 2016 will be its best ever, in my opinion.

A company's stock-price performance is highly correlated with its business performance over the long term, but the short term is another matter. Investors' collective emotions, including those of greed and fear, largely drive stock prices over shorter periods, such as a year. Additionally, the market is a forward-looking machine, so today's stock prices are usually driven by the earnings growth that the companies themselves, Wall Street analysts, and others are expecting in the future.

Stratasys' future growth prospects are very fuzzy at this point. Stratasys' management has said in its conference calls following the release of its first- through third-quarter 2015 results that it had "limited visibility" into near-term customer demand for its enterprise products. This was why it pulled its full-year 2015 guidance when it released its second-quarter results.

For these major reasons, I don't think investors are going to pump enormous amounts of money into Stratasys' stock -- at least not enough for the stock price to rise more than 158%.