Please ensure Javascript is enabled for purposes of website accessibility
Log In Help Join The Motley Fool
Free Article Join Over 1 Million Premium Members And Get More In-Depth Stock Guidance and Research
By Matthew Frankel, CFP® - Jan 31, 2016 at 10:08AM

Citigroup stock has fallen by 23% in the past month, but it could still drop more.

Citigroup (NYSE: C) has fallen by more than 23% over the past month, and now trades for just 59% of its book value -- a level not seen since 2012. While I think this price is extremely attractive, it's important not to lose sight of one of the most important principles in investing. Even though a stock has dropped, it can still have further to go, and Citigroup is no exception. In fact, any of these three things could cause Citigroup's stock price to plunge even more. 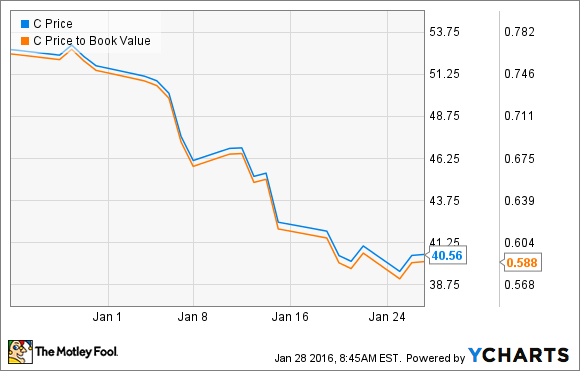 The stock market could crash
This is the biggest, and in my opinion, the most likely reason we could see Citigroup fall in 2016. Keep in mind that even if the market completely collapses, Citigroup would most likely be fine, thanks to the more stringent capital requirements and the improvement in Citi's asset quality. However, if the market were to fall into bear territory, which is defined as 20% off its highs, which would translate to about 1,700 for the S&P 500, we could see Citigroup's profits drop significantly. And I believe there is a pretty good chance of that happening, especially if commodity markets remain weak.

Not only would a crash create downward pressure on Citigroup all by itself, but it could negatively affect virtually every aspect of Citigroup's business. As I'll discuss in detail later, any economic weakness could cause consumers and businesses to cut back on spending, and Citigroup's lending business could suffer. People could also begin having trouble repaying their loans in a declining economy, which would increase the bank's delinquency rate.

Investment banking could suffer as fewer companies would be inclined to issue IPOs or take on additional debt. And, the Citi Holdings legacy asset division could take a hit, as it already contains billions of dollars in low-quality loans. Right now, 2% of Citi Holdings' loans are 90 days delinquent or more, and that's when the economy is good. The division has about $45 billion in loans on the books, so any unexpected increase in the delinquency rate could hurt the bank's bottom line.

Simply put, a market crash would be bad all around for Citigroup, and if the first month of 2016 has been any indication, a full-blown crash isn't out of the question.

Consumers could become reluctant to spend money
This would be a nightmare for any bank that relies on lending revenue. In 2015, Citigroup's loan portfolio increased by 5%, as did deposits, excluding the Citi Holdings legacy division. However, there are some signs that consumers may be getting a little more reluctant to borrow money.

After January's turbulent stock market activity, I can't help but think that consumers may get the jitters about the future of their investments, and decide to cut back on spending to be defensive. If this happens, Citigroup's revenue could be severely impacted, which would certainly cause profits to drop.

Citigroup's capital plan could be rejected
As a lingering result of the financial crisis, all U.S. banks with over $50 billion in assets are required to submit capital plans to the Federal Reserve every year. Based on the results of the Fed's stress test, which determines if a bank is adequately capitalized to handle a worst-case economic scenario, the Fed can approve or reject the bank's capital plan.

In Citigroup's case, this is why the dividend was stuck at a penny per share for so long, and why it took this long just to get a $0.05 quarterly payout. Many experts think that Citigroup will attempt to significantly increase its dividend this year, while continuing to emphasize buybacks to take advantage of the depressed valuation (I've written about the bank's dividend in detail here).

To make a long story short, if Citigroup's capital plan gets rejected, it could erode investors' confidence in the bank, at a time when the market is already shaky. This isn't too likely -- 29 of the 31 banks to submit capital plans in 2015 were approved, Citigroup included. However, Citigroup remains the only one of the "big four" U.S. banks to have its capital plan rejected twice -- in 2012 and 2014, so you can bet investors will be watching the stress test results closely when they are released this Spring.

Will any of these happen?
Let me be clear -- I think Citigroup trades at an extremely fair valuation given the risks, and I don't foresee the share price dropping much from its current level. In my mind, the overall stock market falling is the most likely of these three things to actually happen, but any of these are entirely possible. And, any price drop in Citigroup caused by these three events will likely be short-lived, and of little concern to long-term investors.