Please ensure Javascript is enabled for purposes of website accessibility
Log In Help Join The Motley Fool
Free Article Join Over 1 Million Premium Members And Get More In-Depth Stock Guidance and Research
By Jason Hall - Jan 31, 2016 at 8:03AM

Nucor took a large non-cash writedown that deflated profits, but its operational performance remains top-notch, even as imports and weak global demand affect its business.

There were a few key takeaways from this quarter's results, including Nucor's efforts to reduce the impact of imports on its business and how much better it has held up financially than almost all of its competitors.

I've added adjusted earnings per share to the table for some important context. Nucor's GAAP loss of $0.19 per share in the quarter was tied to $237.1 million in non-cash impairment charges the company took against its Italian joint partnership, Duferdofin Nucor, and writing down equipment at a Louisiana site that it won't use going forward.

Yes, it's not necessarily "good" that the company essentially wrote off $237 million in economic value related to those assets, but it demonstrates that the financial performance wasn't because of poor operations.

I've added cash from operations to the full-year results.

Despite a significant decline in revenue and GAAP earnings, Nucor's operating performance remained solid for the year. It's worth noting that some changes in working capital -- i.e., short-term assets and liabilities on the balance sheet -- played a role as well, but it was largely a product of cost containment at Nucor, as well as a focus on moving upstream with value-added products.

It's not just Nucor feeling the pinch
Nucor isn't the only steelmaker that's been feeling squeezed over the past year.

Steel Dynamics also had a net loss in its fourth quarter, with its $253 million shortfall large enough to cause the company to report a $130 million net loss for the full year. And just like with Nucor and AK Steel, non-cash impairment charges -- $428.5 million in the case of Steel Dynamics -- played a big role in the GAAP results. In Steel Dynamics' case, the company wrote down the value of its recycling operations, in the face of a weak global scrap commodity market that could grow even weaker in coming years.

Imports remain one of the key issues affecting steelmakers. Nucor CEO John Ferriola said, "Despite the highest level of domestic steel consumption since 2006, the American steel industry capacity utilization in 2015 was around 70% and pricing for most steel products essentially collapsed." This is a double-whammy, since fixed costs -- especially for producers like AK Steel -- can make it much harder to make money in a weak demand environment.

Nucor and Steel Dynamics have some advantages since they both use "mini mills" to produce much of their steel. These mills are more scalable, meaning the companies are better able to respond to both weak- and high-demand environments with more variable fixed costs, while companies such as AK Steel and U.S. Steel are subject to huge negative cash flow swings in weakening demand environments. 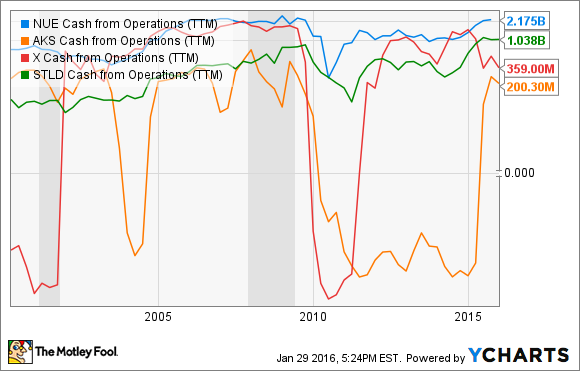 What management is doing about the challenging environment
Nucor management is particularly focused on what it can control. There are some efforts the industry can take to fight against illegal imports, but it can be a long and tedious process, with no guarantees. Here's what Ferriola had to say:

It is not an exaggeration to say that the global steel industry is in a crisis. The crisis is the direct result of foreign governments, particularly China, blatantly subsidizing their steel industries. In further violation of international trade rules, this glut of global steel production has led to the dumping of steel products into the U.S. market. ... When foreign producers and governments break mutually agreed upon trade laws, there must be meaningful consequences. Nucor has joined other U.S. steel producers in filing trade cases for hot rolled, coal roll, and corrosion-resistant flat-rolled products. We are pleased that the International Trade Commission made preliminary determinations of injury in all three cases.

Looking ahead
Not only is Nucor one of the lowest-cost producers in the industry, but its balance sheet is also enviable: 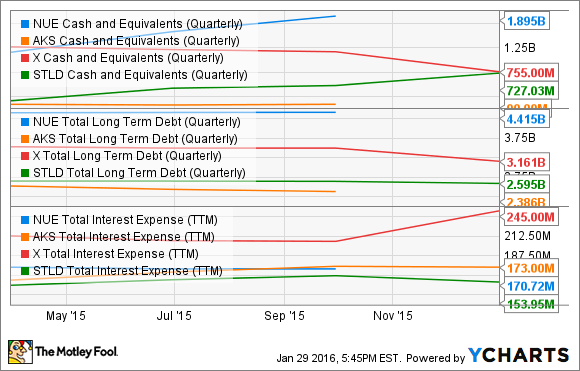 Nucor has more cash than these competitors combined, and its debt expense -- even with the highest debt -- is nearly the lowest because its history of rock-solid financial stability gives it a much lower cost of capital than its higher-risk competitors.

It's going to take some time for business to improve for these domestic steelmakers, but Nucor's long track record of solid financial and operational performance, along with a very strong balance sheet, will serve it well as management navigates the downturn and works toward those five growth drivers.

Jason Hall has no position in any stocks mentioned. The Motley Fool recommends Nucor. Try any of our Foolish newsletter services free for 30 days. We Fools may not all hold the same opinions, but we all believe that considering a diverse range of insights makes us better investors. The Motley Fool has a disclosure policy.