Please ensure Javascript is enabled for purposes of website accessibility
Log In Help Join The Motley Fool
Free Article Join Over 1 Million Premium Members And Get More In-Depth Stock Guidance and Research
By Tamara Walsh - Jan 31, 2016 at 8:51AM

PepsiCo faces some serious headwinds in the year ahead. However, the soda and snack giant still has a lot to offer long-term investors.

PepsiCo (PEP 0.37%) rewarded investors last year with a stock that climbed more than 5%, compared with a decline in the broader market. The soda and snack giant also continued its 42-year legacy of dividend increases. With a stock price of around $97 today, PepsiCo offers investors an annual dividend yield of 2.93%, which is above the industry average yield of 1.98%. Throw in Pepsi's history of superior shareholder returns and we have all the markings of a Wall Street darling. 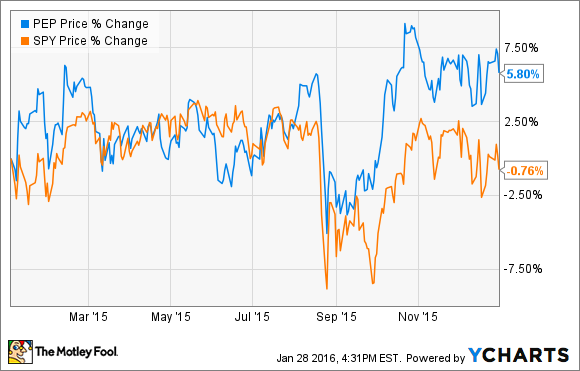 However, with public markets on shaky ground and soda sales declining at a steady clip, 2016 could prove a challenging year for the soda and snack conglomerate. Let's take a closer look at the factors working against Pepsi in the year ahead.

A pricey starting point
If you were thinking about scooping up shares of PepsiCo in 2016, you may want to hold off. The stock looks pricey today, with shares trading just 5% below the stock's 52-week high. On top of that, Pepsi's price-to-earnings growth ratio of 4.93 is one of the highest in the industry. Much of Pepsi's growth potential is already priced into the stock.

Nonetheless, valuation is only part of the story. Investors should keep an eye on currency risks as well. Pepsi is especially vulnerable to this given its position as a multinational conglomerate. The company generates nearly 50% of its annual net revenue outside the United States. This situation puts Pepsi at additional risk to foreign exchange rates.

In fact, it's already having a negative impact on Pepsi's net revenue. For example, a 12% impact of unfavorable foreign exchange caused Pepsi to post a 5% decline in net revenue for its recent third quarter, down from what otherwise would have been a 7.4% rise in revenue in the period. These risks will only increase in the year ahead as Pepsi continues to grow its footprint in foreign and emerging markets.

Regulators crack down on soft drinks
Soda sales have been declining for years now, as consumers opt for healthier options such as flavor-packed carbonated water. However, new regulations could make things worse for soda giants such as Pepsi and Coca-Cola (KO 0.13%). The U.S. government kicked off 2016 by introducing new health guidelines that strongly recommend Americans reduce their consumption of sodas and snacks containing high-fructose sugars.

This news could negatively affect soda companies, particularly as soda volumes already declined more than 2% last year, according to Nielsen.

On the face of it, this seems like it would be a bigger problem for Coca-Cola. After all, Coke is the largest beverage company in the world. Moreover, sales of Coke's regular size cans of soda accounted for as much as 85% of Coke's U.S. sales last year. Pepsi, on the other hand, generates half of its net revenue from its Frito-Lay snack portfolio of brands.

In one sense, this helps diversify Pepsi's portfolio and offset some of the losses from declines in soda consumption. However, unhealthy snacks are also under attack from regulators these days. The culprits of poor health -- sugar, saturated fat, and sodium -- are some of the main ingredients in Pepsi's most popular snack brands. including Cheetos, Doritos, Fritos, and Lay's potato chips.

Going forward, Pepsi should continue investing in its "good for you brands" to help the company get ahead of shifting consumer preferences to healthier snacking. Pepsi's portfolio of "good for you brands" is currently its smallest overall, with just four standout names covering both beverages and snack foods, including Sabra hummus, Tropicana, Naked juice, and Quaker.

Down but not out
The year ahead will no doubt be a challenging one for Pepsi, particularly given the stock's already inflated valuation. However, it won't be Pepsi's worst year. I want to be clear: Pepsi is a solid long-term play. The company has plenty going for it, including strong brand equity, cash flow generation, and a history of putting shareholders first through reliable dividend growth and share buybacks. Therefore, investors with a time horizon that extends beyond 2016 shouldn't worry.