Please ensure Javascript is enabled for purposes of website accessibility
Log In Help Join The Motley Fool
Free Article Join Over 1 Million Premium Members And Get More In-Depth Stock Guidance and Research
By Tamara Walsh - Jan 31, 2016 at 11:03AM

Target Corporation is making big changes to its management team and forging new partnerships to fuel growth in the year ahead.

Last year was a transitional one for Target Corporation (TGT 2.76%). The discount chain enjoyed record online traffic during the recent holiday shopping season. However, Target was forced to meter that traffic during Cyber Monday -- leaving many consumers frustrated. This incident was a reminder that Target must become more adept at handling massive inflows of customers to its website if it hopes to truly compete with online rivals in the future. 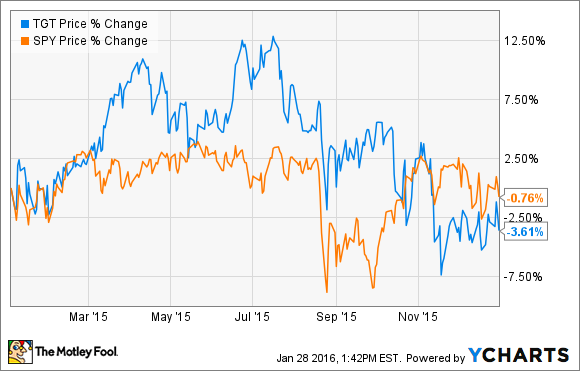 Target's stock closed out 2015 slightly lower. However, Target has positioned itself for success in the year ahead, thanks to strategic hires the company made last year combined with a renewed focus on higher-margin apparel.

A multi-channel approach
Attracting consumers who shop in more than one channel -- for example, both on a mobile device and in stores -- is Target's priority going forward, because these customers tend to spend more than those who simple shop in the store. One of the ways Target hopes to achieve this goal in 2016 is with fresh leadership at the top.

Since bringing in Brian Cornell to run the company in 2014, the big-box chain has ushered in a wave of top talent, including a new finance chief and chief information officer, and it's even created the new position of chief operating officer. These fresh faces at the top of Target's management team could help strengthen the company's position as a leading discount retailer in the quarters ahead.

The bull's-eye retailer, after all, already generates above-average margins. In fact, Target's margins are higher than its biggest bricks-and-mortar rival, Wal-Mart (WMT 0.21%). That's because Target derives a greater portion of its revenue from higher-margin segments such as apparel and home goods versus Wal-Mart. Apparel together with home decor, for example, currently accounts for roughly 36% of Target's overall sales, whereas Wal-Mart generates just 14% of its total sales from these categories.

Better still, shareholders can expect Target's margin perks to continue thanks to its strategic partnerships, which give the retailer limited-edition merchandise that consumers won't find elsewhere. Everyone from high-end fashion moguls to in-vogue fitness brands such as SoulCycle are eager to work with the discount retail chain these days.

This retailer's got soul
Target is bringing the hottest trend in fitness right now, SoulCycle, to its stores with its latest out-of-the-box collaboration. The discounter is now offering its customers free 45-minute SoulCycle classes at select Target stores across 10 U.S. cities. Target shoppers can also check out the Target x SoulCycle pop-up shops within Target locations and online at Target.com for exclusive workout apparel and wellness products.

This approach not only gives Target one-of-a-kind merchandise, but it also offers consumers a chance to buy SoulCycle-branded products at a discount. A co-branded SoulCycle for Target tank, for example, costs $29, compared with the same tank without the Target logo that runs between $54 and $64. It's win for customers as well as Target. This laser-like focus on the apparel business should drive Target's margins even higher in 2016.

Additionally, exclusive partnerships such as this help Target fend off competition from more convenient shopping outfits such as Amazon.com (AMZN 3.53%). Sure, Target's e-commerce achievements aren't anywhere near that of Amazon today -- particularly considering how Amazon has managed to post revenue growth that's been both fast and consistent.

However, Target's partnerships with high-end designers such as Missoni, Lilly Pulitzer, and now SoulCycle mean the retailer has a continual series of one-of-a-kind products that shoppers won't find on Amazon.com or elsewhere online.

Urban ambitions
Target's smaller-format stores offer another growth avenue for the company in the year ahead. Target plans to open an upwards of 11 so-called urban stores or smaller-format locations in crowded U.S. cities this year. The move is part of Target's plan to attract more affluent customers whom are living in busy city centers.

Target's urban locations are about 45,000 square feet in size, or as much as 50% smaller than the typical 130,000-square-foot Target stores, and they carry a much more curated merchandise mix. "Sales productivity levels are double those of traditional stores," according to Morningstar. This situation means we could see dozens more Urban Target stores pop up going forward as the retailer looks to boost sales growth.

These catalysts tell us that 2016 should be a strong year for Target. However, it would be overly ambitious to assume 2016 will be the company's best year yet. The retailer's fresh-faced management team needs time to settle into their new roles. Meanwhile, Target's urban initiatives are still in the early stages of development.