In the midst of a big change, here are three things that could cause Ashland stock to falter.

Chemical specialist Ashland (ASH 0.70%) is heading into a big year. That's because, after years of effort, it's planning on culminating a spinoff. But that's just one of three key issues you'll want to keep an eye on in 2016.

The spin
The big change coming down the line at Ashland is the planned spinoff of Valvoline. The move makes sense, since Ashland makes chemicals and Valvoline is known for motor oil and, frankly, already has a prominent brand identity. It isn't that there's no overlap between making motor oil and chemicals, but the end markets for Ashland and Valvoline are very different.

So the first big risk for Ashland is that something goes awry with its spinoff plans. That could take any number of forms, but one thing to pay particular attention to is activist investors. Elmrox Investment Group LLC, a large Ashland shareholder, has suggested that it might make more sense to sell the chemicals business and keep Valvoline. Pointing to the Dow Chemical (DOW) and DuPont (DD) merger, this dissident shareholder suggests that the chemicals business could fetch as much as $9 billion if it were sold.

If recent history is any guide with regard to dissident stockholders, the currently civil discussions between Elmrox and Ashland could turn ugly. And that, in turn, could take shareholders on a wild ride.

Big changes have been taking place at Ashland. Source: Ashland.

The chemicals world is tough
The next issue that could cause Ashland's shares to fall is the market environment. Dow and DuPont aren't merging because the world of chemicals is surging; they're attempting to join forces so they can restructure the two businesses and cut costs. The end goal is to break up into three leaner and meaner companies.

Like all of its peers, Ashland's chemical business has been facing headwinds. At the same time it's been divesting businesses, which shrinks the top line. However, the businesses it's keeping and acquiring offer higher margins than the ones it's jettisoned. So, despite the top-line declines, Ashland has been able to put up strong EBITDA margins because of its shifting business mix.

But if it can't continue to put up strong margin numbers, investors could take an even more negative view of Ashland's business than they already have simply because it's a chemicals company. So you'll want to pay attention to the company's changing business mix and how well that's supporting EBITDA margins. If margins start to slip, investors are likely to react poorly. 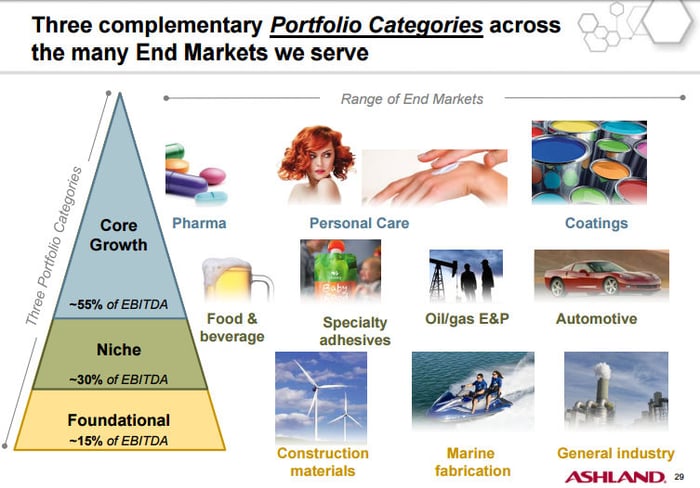 Mr. Market may miss the forest for the oil wells ... or something like that. Source: Ashland.

Oil, the drilling kind
One other thing to be concerned about at Ashland is its exposure to the oil drilling industry. This isn't the biggest business for Ashland, but oil is a headline-grabbing topic right now. That means headline risk for a company that supplies key chemicals to a range of oil sectors, including the fracking industry.

Truthfully, it's far more important for investors to watch the company's core growth markets, which include industries such as pharmaceuticals, personal care, and coatings. Core growth markets make up around 55% of Ashland's business, and it's where the company is spending the most money and effort trying to grow. The oil business is just one piece of what Ashland refers to as its "niche" businesses, a group that in total makes up 30% or so of EBITDA.

But Mr. Market can get caught up in the headlines very easily. And with oil's long slide continuing in early 2016, Ashland could be a casualty of investors throwing the baby out with the bathwater.

A tumultuous year?
With so much going on at Ashland, 2016 is likely to be a pretty tumultuous year. Expect a lot of news. As you watch the company, however, keep an eye on the Valvoline spinoff, EBITDA margins, and oil industry sales, three issues that could cause the stock to fall. Each is worth watching closely, even if you think management is doing all the right things.