These are genuine risks.

Could LinkedIn stock fall in 2016?

The future of HR departments -- especially at faster-growing technology companies -- is being dictated largely by an outfit operating out of Mountain View, Calif.: LinkedIn (LNKD.DL). Where once a company would have to hire a team of experts to scour the country for able employees, executives can now use LinkedIn's Talent Solutions product to gain access to the most promising leads.

I'm a big believer in the stock, as it makes up over 5% of my family's real-life retirement holdings. But no matter how much we love a company or its stock, it's always worth considering the bear case. Along those lines, here are what I see as the three biggest reasons LinkedIn's stock could fall.

1. It's expensive
Even though LinkedIn stock is a full 30% lower than it was just a year ago, it's still expensive by most common metrics. It currently trades for 75 times trailing non-GAAP earnings, and an eye-popping 130 times trailing free cash flow. For comparison's sake, the broader market currently trades for 21 times  earnings -- and even that's considered pricey.

Of course, there's a reason investors are willing to pay so much for LinkedIn: It's growing by impressive margins. The company has three main revenue streams: Talent Solutions (where companies use the service to recruit employees), Marketing Solutions (advertising), and Premium Subscriptions held by individual users. Look at how all three have grown over the past four years.

But even with such impressive growth, the stock remains priced ahead of the growth analysts believe will occur. We can see that because the company's price-to-earnings-growth ratio stands at 1.8, where 1.0 is considered "fairly valued."

One thing is certain with regard to LinkedIn's stock: It's volatile. When the market dives, or any hint of bad news hits, its stock can take an outsized dive.

2. Failure to grow users
LinkedIn benefits from one of the most powerful competitive advantages in the marketplace: the network effect. In essence, with each additional user who signs up with LinkedIn, businesses and other users have added motivation to begin using the service, and the more businesses that are using LinkedIn, the more motivation the individual has to sign up. It's a virtuous cycle.

In just about every discernible way, LinkedIn has been doing a great job at jump-starting this cycle. 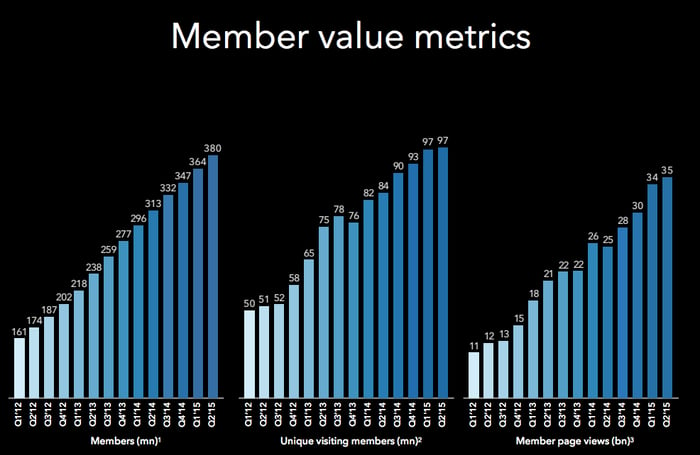 But if LinkedIn is unable to continue wooing users, this would flip the network effect on its head and turn from a virtuous cycle into a vicious one. Currently, LinkedIn is working hard on international expansion, and to broaden its reach beyond its core in technology companies.

In the company's annual report, it notes: "A substantial majority of our traffic is generated by a minority of our members. Our business may be adversely affected if we are unable to attract and retain additional members who actively use our services."

While there hasn't been any real sign of the member base slowing down, it remains one of the highest risks to LinkedIn the company, and the stock.

3. Investing for the future
Finally, LinkedIn's stock may fall because the company decides to forgo short-term profit in search of long-term sustainability. I don't consider this a drawback at all: It's one of the reasons I love owning the stock.

But it's important to acknowledge, especially for beginning investors, that when companies decide to pour most of their cash flow back into the business, Wall Street can take a "wait-and-see" approach. The future, where LinkedIn dominates the HR world, isn't guaranteed, and many professional investors don't like owning a stock that's not consistently growing earnings.

But with LinkedIn's brain trust of founder/Board Chair Reid Hoffman, and CEO Jeff Weiner, decisions are often made with the long-term horizon in mind. Take a look at how spending on research and development, as well as selling, general, and administrative expenses, have also increased markedly since 2012.

So far, the revenue gains LinkedIn has achieved have justified the increase in spending. But investors need to remember that this is no guarantee that the investments being made right now will end up panning out as expected in the years to come.

And even if they do, the market might punish the stock in the short term for forgoing profits.

In the end, I still remain as confident as ever in LinkedIn, but I'm also keenly aware that the next five years will likely be bumpy ones for the company's stock, and its shareholders.