Tesla management has already given investors a glimpse of what it expects for vehicle unit sales this year.

In 2015, electric-car maker Tesla Motors (TSLA -0.85%) saw vehicle sales rise by 60% compared to 2014. Can the automaker keep up this impressive growth in 2016? Here's a look at what the company could be expecting from its vehicle sales this year. Hint: Growth is expected to accelerate again.

Expectations for 2016
Investors will likely get official full-year guidance for Tesla's expected sales later this month. But until then, investors aren't left completely in the dark. One excerpt from Tesla's third-quarter shareholder letter and another from its second-quarter earnings call provide some insight.

"Looking ahead, we still remain highly confident of average production and deliveries of 1,600 to 1,800 vehicles per week for Model S and Model X combined during 2016," Tesla management said in the company's third-quarter shareholder letter.

During Tesla's second-quarter earnings call, which followed the company's first reference to this expectation for weekly deliveries in 2016, Tesla CEO Elon Musk emphasized that this forecast for average production and deliveries of S and X combined factors in holidays and possible factory shutdowns for retooling.

"[T]hat's averaged over the year," Musk explained. "So that means, like, in a given week, we might go as high as 2,000 units to make up for holidays, factory retooling and that kind of thing."

This level of weekly production and deliveries would equal about 83,200 to 93,600 deliveries in 2016, representing about 65% to 85% year-over-year growth in vehicle sales.

Here's what this would look like in a chart when compared to Tesla's previous annual sales: 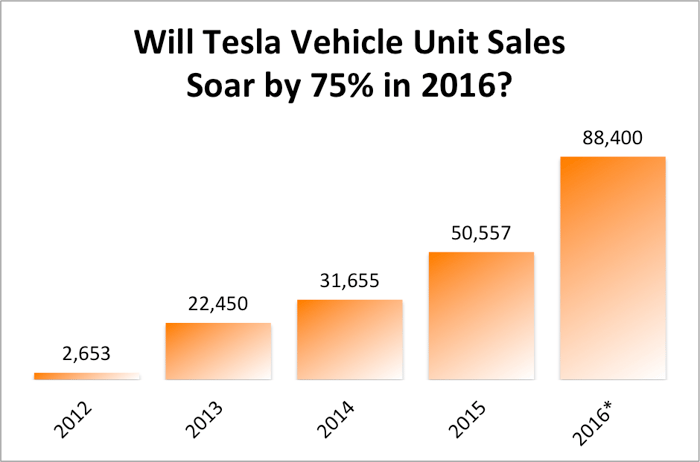 Sales figures retrieved from Tesla SEC filings for years shown and from press releases for 2015. Asterisk indicates forecast based on management's expectations for weekly production and deliveries of S and X combined in 2016; midpoint from management's forecasted range is used. Chart source: Author.

Using the midpoint for Tesla's forecasted range for weekly production and deliveries in 2016, vehicle unit sales would soar by 75%.

Given Tesla's recent track record of falling short of its own initial annual guidance, can Tesla really live up to these expectations? Deliveries came in short of expectations in both 2014 and 2015. During these two years, Tesla initially expected 35,000 and 55,000 deliveries, and actual unit sales were 31,700 and 50,600, respectively.

There's one reason to believe this guidance could be more reliable. If Tesla's formal guidance for 2016 mirrors these expectations for weekly deliveries, it would mark the first time guidance was a range and not a specific target; so, the low end could bake in more conservatism than Tesla's specific targets in the past, potentially making it more realistic

With a look at these comments from management during recent earnings reports and earnings calls, it's likely Tesla will at least guide for 65% year-over-year growth in vehicle sales in 2016 or higher. Investors will probably find out exactly what Tesla expects on February 10, when the company reports fourth-quarter results.