The fast-casual chain's upcoming Q4 2015 earnings release will reveal the extent of current damage wrought by its recent food safety crisis. Investors shouldn't neglect to understand an important metric when absorbing the report. 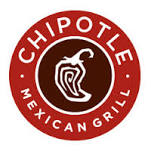 Chipotle Mexican Grill (CMG 0.46%) reports fourth-quarter 2015 earnings after the closing bell on Tuesday. I'm looking forward to the end of conjecturing about the impact of the E. coli and norovirus outbreaks on the business, and the opportunity to look at real numbers and draw some conclusions.

What should an investor focus on once the earnings are filed? Some of the traditional metrics by which the market used to judge Chipotle, such as comparable sales growth, are in for a complete reset -- the company already warned us earlier this month that comparable sales would be negative for quarter. Of course, it's vital to grasp the magnitude of the comparable sales decline, and understand management's plan for restoring growth in comps moving forward.

Margin compression trumps many other concerns
But just as important -- and perhaps more so in the near term -- is to understand the extent by which operating margins have become compressed, or to put it more plainly, squeezed, as well as to ascertain how long they might take to decompress back to pre-crisis levels.

The best place to attack this question is by examining the company's restaurant contribution, a metric Chipotle shareholders may have an interest in tracking for the next four to six business quarters at minimum.

In the restaurant business, a menu item's "contribution" is defined as its selling price minus food cost. So if Chipotle sells a beef burrito in your area for $7.00, and the food cost to Chipotle is $2.42, the menu item, or "plate," has a contribution of $4.58. This contribution, divided by the total plate price of $7.00, is called contribution margin, which in this example equals roughly 65%.

Chipotle breaks these costs into the categories of "Food and Packaging," "Labor," "Occupancy" (i.e. rent and lease costs), and "Other Operating Costs." Below I've strung together the last seven quarters of Chipotle's restaurant costs -- before its food safety woes originated in Q4 2015. Note that each cost is expressed as a percentage of total revenue: 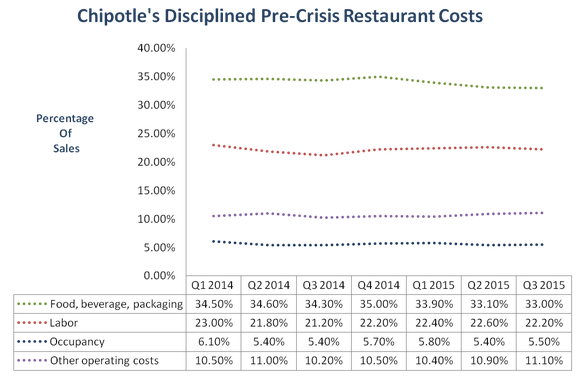 If you add up all the cost percentages in Q1 2014 (the first column of the chart), you'll see that Chipotle's total restaurant costs were 74.1% of sales. Since we're dealing with percentages of revenue (100%), we can simply subtract total costs from 100% to arrive at the restaurant contribution margin of 25.9% in Q1 2014.

Fast forward to Q3 2015 in the last column. Chipotle booked total restaurant costs of 71.8%, resulting in a restaurant contribution margin of 28.2%. It's clear from the nicely even trend-lines of the chart, that from quarter to quarter, percentages don't change much -- Chipotle has run its restaurants with discipline and excellent consistency up until now.

We should also note that the 2.3% improvement in restaurant contribution margin over the seven quarters, from 25.9% to 28.2%, resulted in $28 million in additional profit for Chipotle in Q3 2015, given its sales level of $1.2 billion.

While the ultimate restaurant contribution margin may look small, as it implies that for every sales dollar, Chipotle has just 28 cents left over to cover all other expenses outside of direct restaurant costs, this margin actually covers general and administrative expenses amply. Chipotle recorded a net profit margin in Q3 2015 of 12%.

What to expect, and questions to ponder
In an investor update on Jan. 6, Chipotle disclosed that it expected Q4 2015 restaurant contribution margin (which it terms "restaurant-level operating margin") to fall steeply, to between 20% to 21%. Part of this margin compression is due to plunging revenue -- fewer sales dollars were available last quarter to meet fixed and semi-fixed components of restaurant costs.

To illustrate, take restaurant labor. Those who visited Chipotle locations in late November and December witnessed margin compression occurring in real time, in the guise of greatly reduced revenue (no customers standing in line at peak hours) against fixed and semi-fixed labor costs (employees standing idly around).

In addition to higher labor costs, we'll also see that food costs rose as a percentage of revenue, as Chipotle grappled with the integrity of its food supply chain while simultaneously changing procedures related to certain at-risk fresh ingredients.

For both labor and food, and indeed, all other restaurant costs, investors will want to understand how much margin compression was temporary, and how many percentage points of profit must be sacrificed to new, ongoing costs.

Similarly, we don't yet know the cost of Chipotle's new centralized "commissary" approach to pre-handling some fresh ingredients. Chipotle has used a similar method as recently as 2014, but new protocols are much more rigorous, calling for the chopping, sanitizing, and hermetically sealing of tomatoes, lettuce, and cilantro in central kitchens before the ingredients are shipped out to stores.

Understanding the direction of margin compression is important, as in the best case scenario, Chipotle can resume its former growth pattern and recover its traditional profitability levels. Between the company's earnings filing and management's conference call with analysts, we'll get some tangible information and guidance regarding the company's current and future restaurant contribution margin. For concerned shareholders, it's a fruitful area to focus on when trying to figure out what a fair price for Chipotle should be -- both at the moment, and into the medium-term.

Asit Sharma has no position in any stocks mentioned. The Motley Fool owns shares of and recommends Chipotle Mexican Grill. Try any of our Foolish newsletter services free for 30 days. We Fools may not all hold the same opinions, but we all believe that considering a diverse range of insights makes us better investors. The Motley Fool has a disclosure policy.