Please ensure Javascript is enabled for purposes of website accessibility
Log In Help Join The Motley Fool
Free Article Join Over 1 Million Premium Members And Get More In-Depth Stock Guidance and Research
By Lee Samaha - Feb 2, 2016 at 8:00AM

The company is seen as a safe place to invest in the industrial sector, but did its recent results change the thesis?

It's no secret that the industrial sector is facing a difficult 2016, and historically investors have favored stocks such as Danaher Corporation (DHR 0.36%) for their "safe haven" qualities. The company's exposure to healthcare, environmental, and dental technologies gives it defensive qualities. Moreover, 60% of its revenue comes from recurring (often high-margin consumables) sales. That said, its recent fourth-quarter results saw core revenue come in flat, when management had expected 2% growth. Which of course begs the question: Is Danaher still a safe haven?

What went wrong?
Despite core revenue growth that fell short, Danaher met analyst estimates for $1.27 in adjusted diluted EPS, and first-quarter guidance of $1.00 to $1.04 straddles analyst estimates of $1.03.

Indeed, Barclays analyst Scott Davis asked a related question on it. Joyce responded by highlighting the growth opportunities in its less cyclical businesses and outlined his assumption that "some of the slowing in December is essentially the environment that we're going to see in the near term here."

That said, it's a useful idea to look at segmental performance to see just where trends are likely to take Danaher in 2016.

Segmental trends
You can think of the test and measurement and industrial technologies segments as being the most cyclical, while life sciences and diagnostics, environmental, and dental are relatively less so. A breakout of Danaher's fourth-quarter operating profit share reveals that only a third of its earnings come from the former -- within which around 20%-30% of revenue is from consumables. 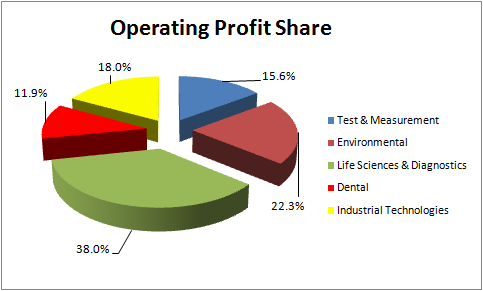 It's useful to separate core from reported results because Danaher is an acquisitive company. In other words, the reported numbers are somewhat distorting. Indeed, the acquisition of Pall Corp. clearly flatters life sciences and diagnostics reported growth, while dental benefited from the acquisition of Nobel Biocare.

A few positive takeaways from the table:

And now the negative:

Commentary
It's no surprise to see industrial technologies and test and measurement give weak results, and it's fair to apportion a large part of the performance to the economy -- not a lot Danaher can do about that. Moreover, the improvements in core operating margin across the board are a testament to management's ability. 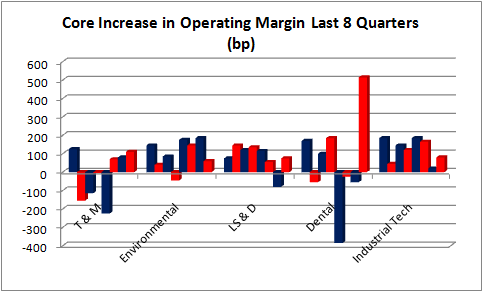 However, dental's sluggish core growth is a concern, though Joyce signaled that its dental technology products -- hit by customer destocking all through 2015 -- had turned a corner: "In dental technology, we saw our first quarter of positive growth since the fourth quarter of 2014. Top line results continued to be affected by destocking within our U.S. distribution channels but to a much lesser degree than in previous quarters."

Turning to life science and diagnostics, core revenue growth of just 2% -- a worrying sign, as it indicates that Danaher's revenues may not be as immune as many think.

Sanford Bernstein analyst Steve Winoker asked about growth rates, and CFO Daniel Comas responded by pointing out that diagnostics was the larger side (mainly consumables) and growth had been negatively affected by fewer selling days in the quarter.

"So, actually on a days-adjusted basis, diagnostics tracked pretty close to that 3% to 4% rate all year, including the fourth quarter," he concluded.

Looking ahead
All told, it was a good quarter of execution, and Danaher appears to be getting its dental segment back on track for growth, while life sciences and diagnostics and environmental remain strong.

Clearly, the concern lies with revenue from its industrially exposed segments. Moreover, Danaher maintained its expectations for 2% to 3% core revenue growth in 2016, despite flat core revenue growth in the fourth quarter--putting pressure on the company to deliver. On balance, Danaher still deserves the benefit of the doubt and its safe-haven status, but after these results it's bit more dependent on management's ability to execute.