Please ensure Javascript is enabled for purposes of website accessibility
Log In Help Join The Motley Fool
Free Article Join Over 1 Million Premium Members And Get More In-Depth Stock Guidance and Research
By Cory Renauer – Feb 2, 2016 at 9:38AM

After paying for an important alliance, another big dividend boost is questionable.

The healthcare sector has experienced a great deal of change over the past several years, but razor-thin operating margins have remained a constant feature of the medical distribution business. Among the big three companies in this space, AmerisourceBergen (ABC -2.01%) is the only one to see its overall profit margin dip into negative territory recently.

After more than a decade of steady increases at the company, investors might wonder if it can keep its streak going this year. Let's take a closer look at the No. 2 distributor by revenue to gauge its shareholders' chances of receiving another big dividend raise this year.

Distributing drugs and profits
AmerisourceBergen began paying a dividend in 2001 and started raising it regularly about 11 years ago. Over the past several years, the rate of those increases has been spectacular, outpacing its two main competitors, McKesson and Cardinal Health, several times over. However, that dividend growth has been accompanied by a rising share price. At about 1.5%, the yield is less than exciting. 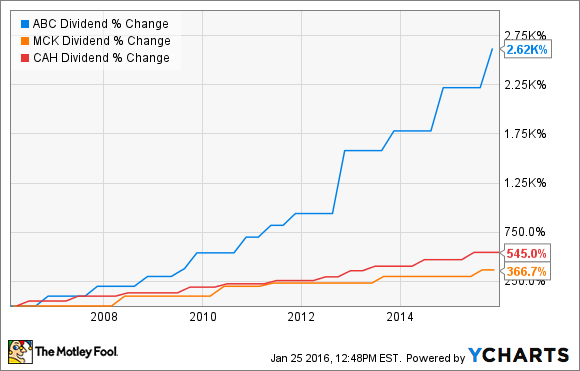 Given the rate of dividend growth over the past several years, however, the currently low yield might not be an issue for those intending to hold the shares for the long term.

Typically, the quickest way to gauge a company's ability to quickly increase its distribution is to look at the percentage of profits required to pay its existing dividend, a metric commonly referred to as the payout ratio. But the company reported negative earnings in recent quarters that render the payout ratio useless.

An expensive alliance
While I would generally advise dividend investors to avoid companies that have recently dipped into the red, AmerisourceBergen has a good excuse. Back in 2013, the company entered a "strategic alliance" with Walgreens Boots Alliance (WBA -1.47%) that didn't come cheap. In a nutshell, AmerisourceBergen distributes products to America's largest chain of retail pharmacies, giving it immense leverage when sourcing branded and generic pharmaceuticals. 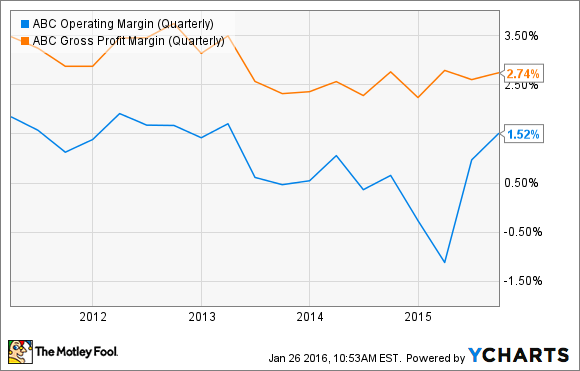 The increased volume was supposed to help "drive improvements in operational efficiency," although slightly contracting margins following the deal (shown above) suggest otherwise. The good news is that revenue has grown considerably, and free cash flow has remained strong. 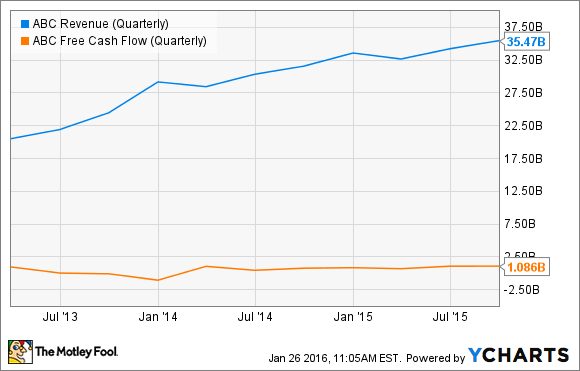 It's a good thing, too, because in return for Walgreens' heft, AmerisourceBergen issued warrants exercisable for about 16% of its equity at the time the deal was struck. Basically, Walgreens has the option to purchase about 22.7 million shares of AmerisourceBergen at $51.50 beginning this March, and the same number of shares at $52.50 again next March. 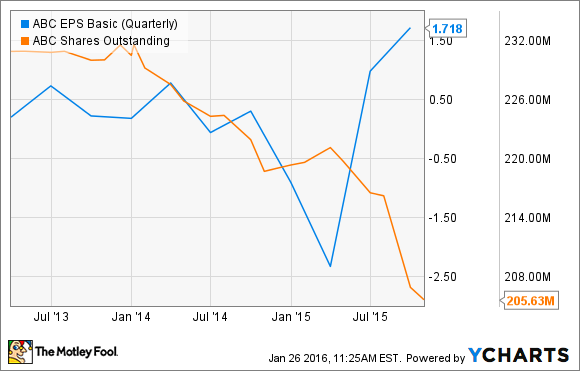 If AmerisourceBergen sat back and did nothing, exercising the warrants would heavily dilute existing stockholders' share of company profits, but that's not about to happen. Efforts to offset the potential upcoming dilutions are largely why the company went deeply in the red last year.

Considering Walgreens' leading market position at the beginning of the deal, and its pending acquisition of Rite Aid, it's hard to criticize AmerisourceBergen's decision to forge such an expensive alliance. The company's top line has expanded significantly since the deal, easily surpassing the $28 billion in incremental revenue management expected at the deal's outset.

Not just buying up shares
If you include warrant hedging, AmerisourceBergen has returned $6.5 billion to its shareholders over the past five years. That's awfully impressive, but the company has been using its substantial cash flows to gobble up more than just its own shares. Last year alone it spent over $2.5 billion on MWI Veterinary Health and roughly the same amount on PharMEDium Healthcare Holdings.

With two customers (Walgreens and Express Scripts) accounting for a combined 46% of AmerisourceBergen's revenue last year, the company's expansion into animal health distribution will provide some much-needed income diversification.

While human and animal health product distribution models are arguably similar, PharMEDium represents a small step outside the company's core competency. The company is a large provider of compounded sterile preparations, such as norepinephrine infusions and preloaded morphine syringes, to U.S. hospitals.

Before the acquisition announcement, one of PharMEDium's facilities received several warnings from FDA inspectors. We can only hope AmerisourceBergen was aware of the citations and used them as leverage to drive a bargain. However, even if it was a case of poorly performed due diligence, the deal should also help diversify its revenue stream away from its two crucial customers.

Tying it all together
While seeing earnings dip into negative territory is enough to startle any investor, the company's ability to generate free cash flow is stronger than ever. This is mainly why I'm nearly certain AmerisourceBergen will raise its dividend again this year. We won't be for sure for some time, as the company usually declares increases in November.

However, I'm not sure if increased cash generation will cause this year's dividend increase to be larger than what investors have gotten used to over the past couple of years. Following all the recent acquisitions, warrant hedging, and share repurchases, the company is carrying a lot more debt than usual. Increases the size of last year's 17% and 2014's 23% seem ill advised when you've got millions of shares to repurchase.

The good news is that the company is firmly entrenched in a three-way oligopoly. Without enormous economies of scale and negotiating leverage, turning a profit in medical distribution is virtually impossible. This bleak reality has kept, and will continue to keep, other competitors out.

Following recent acquisitions and the Walgreens tie-up, AmerisourceBergen is better positioned than ever to post steady gains as an aging America becomes increasingly reliant on the products it distributes.

Cory Renauer has no position in any stocks mentioned. The Motley Fool owns shares of and recommends Express Scripts. The Motley Fool recommends McKesson. Try any of our Foolish newsletter services free for 30 days. We Fools may not all hold the same opinions, but we all believe that considering a diverse range of insights makes us better investors. The Motley Fool has a disclosure policy.