Please ensure Javascript is enabled for purposes of website accessibility
Log In Help Join The Motley Fool
Free Article Join Over 1 Million Premium Members And Get More In-Depth Stock Guidance and Research
By Lee Samaha – Feb 3, 2016 at 11:48AM

The industrial company reset investor expectations to reflect the weakness of its end markets, but remains set for a pickup in its third quarter

Emerson Electric (EMR -2.24%) CEO David Farr has done a pretty good job of preparing investors for a tough year ahead for the company. You know you're in trouble when an earnings presentation begins with the words, "It is a global industrial recession." That said, investing isn't just about buying companies that are currently flying high, and Farr's guidance was enough to reassure investors, who took the stock higher in a down market. Let's take a look at Emerson Electric's first quarter and what management said about it.

On the plus side, the numbers were actually a bit better than management's guidance for the quarter has predicted. In the company's fourth-quarter earnings report in November, Farr forecast a decline of 10% in underlying sales, and management's expectations were for adjusted EPS of $0.50.

Segment detail
It's useful to break out Emerson's segmental detail in order to see the underlying trends in its business. Emerson is largely reliant on capital spending programs in the industrial and energy sectors -- in other words, exactly the sort of things that get hit first in a downturn. A breakout of its 2015 earnings shows the relative importance of each segment. 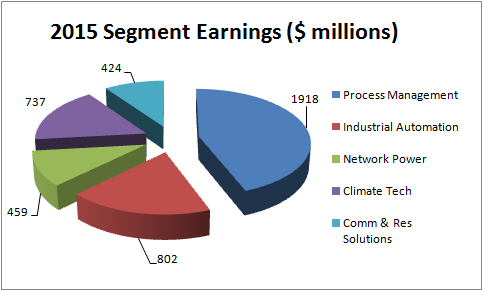 And a graph of sales growth by segment demonstrates how its most important segments -- process management and industrial automation -- are also the weakest at present. 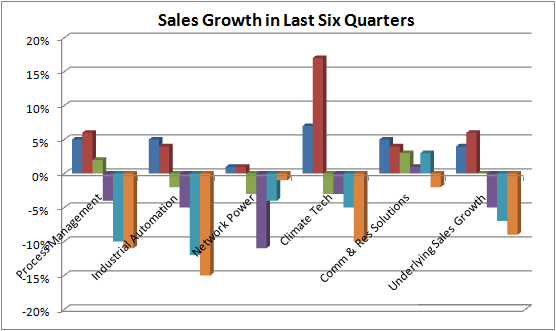 Emerson's process management business has significant exposure to the oil and gas industry, so it's no surprise to see weakness there, although management did point out that conditions in its power, chemical, and life science markets were expected to remain favorable. Performance in industrial automation continues to be weak, with trailing three-month orders down 15% to 20% each month from October to December. Moreover, industrial automation rival Rockwell Automation (ROK -2.33%) disappointed investors recently by lowering its full-year guidance -- a sign that trends worsened in the last quarter.

When lowering guidance for the full year, Rockwell CEO Keith Nosbusch said, "Since providing guidance in November, oil and commodity prices have further deteriorated, and projections for economic growth including industrial production have softened."

However, Rockwell and Emerson Electric may be taking an overly pessimistic worldview. For example, another rival, Europe-based ABB Ltd. (ABB -1.38%), cited order growth of 7% in Europe when it reported results on Wednesday, and talked of "modest growth in Europe" in its outlook. In fact, ABB's local comparable orders and revenue only declined 2% and 1%, respectively.

Despite Emerson Electric's talk of a "global industrial recession," it's not quite all doom and gloom out there.

Emerson Electric's guidance
All of which leads to a look at guidance for the company, and here, Farr's message is more positive:

Essentially, Farr maintained the guidance given in the fourth-quarter earnings, but investors should look to the upcoming investor conference on Feb. 10 for more detail.

Clearly, if the guidance targets are hit, then a snapshot of Emerson Electric will reveal a company with positive sales growth and strong cash flow in the second half -- in other words, a much healthier investment proposition than it is now.

Looking ahead
Emerson Electric's exposure to energy markets has meant Farr has been fighting to counter weakening end markets for almost two years now. As such, the company is probably earlier along the path of restructuring to compensate for end-market weakness than, say, Rockwell Automation is. That's good news -- it suggests that Emerson may well have an easier time hitting its guidance, and its ability to do that is what investors will judge the stock by in 2016.

Lee Samaha has no position in any stocks mentioned. The Motley Fool recommends Emerson Electric. Try any of our Foolish newsletter services free for 30 days. We Fools may not all hold the same opinions, but we all believe that considering a diverse range of insights makes us better investors. The Motley Fool has a disclosure policy.