Please ensure Javascript is enabled for purposes of website accessibility
Log In Help Join The Motley Fool
Free Article Join Over 1 Million Premium Members And Get More In-Depth Stock Guidance and Research
By Tyler Crowe - Feb 3, 2016 at 9:30AM

The announcement of a major private equity deal sparked a roller coaster ride that ended with many investors wanting to get off the ride.

What: Shares of Plains All American (PAA -1.29%) and its general partner Plains GP Holdings (PAGP -0.94%) bounced all over the place in the month of January with multiple double digit drops and pops. The major catalyst for these moves centered around a capital deal it struck, but it's the underlying issues that has investors uncertain on what to do with it. 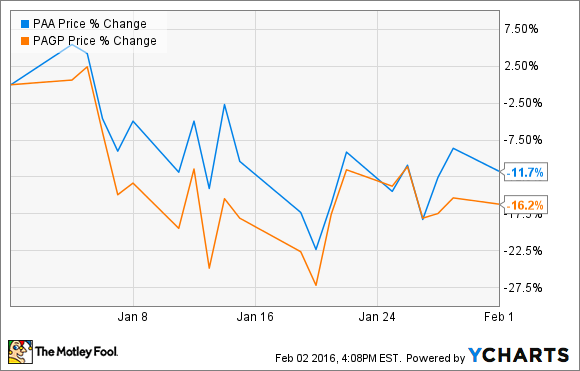 So what: Plains has been in a bit of a quandary as of late. The company wants to continue to reward its shareholders with a generous payout, but the company's assets simply haven't been churning out enough cash flow with oil prices still in free fall. Last quarter the company's distributable cash flow -- the amount that should be available to distribute to investors -- was less than what they paid out. That is simply an unsustainable condition and in many cases should lead to a distribution cut. Yet Plains has said that it plans to maintain its 8% distribution growth plan and will grow into it through new projects coming online.

So to fill the funding gap, management announced that it had raised $1.5 billion by selling 8% preferred convertible units to a bunch of private equity companies. To some, this could be viewed as a relief that there is enough cash to stick to the plan and ride out 2016 until its new projects come online, while others could argue that its just delaying the inevitable distribution cut.

Plains GP Holdings' only cash generating asset is the stake it owns in the partnership. So, you get the idea why the two are connected.

Now what: Months like this can give investors a stomach ache watching shares bounce around this much during any given day, so let's look beyond for a minute. Even with this financing from private equity, Plains will still need to finance future growth through the traditional means of debt and equity. With shares trading as low as they are, it makes any equity offering pretty much uneconomical -- hence the private equity deal -- and its debt profile is just high enough that a lender might shift in their seat a little before letting Plains borrow money.

This situation is shared among many in the master limited partnership space right now, but there are options out there that aren't facing these issues. With those companies available at pretty decent discounts, Plains' better than 14% distribution yield doesn't seem worth the risk today.