Please ensure Javascript is enabled for purposes of website accessibility
Log In Help Join The Motley Fool
Free Article Join Over 1 Million Premium Members And Get More In-Depth Stock Guidance and Research
By Tyler Crowe – Feb 3, 2016 at 8:25AM

With dividend yields this high, investors look like they are anticipating some management moves pretty soon.

What: Shares of Targa Resouces Corp (TRGP -8.71%) and Targa Resources Partners (NYSE: NGLS) both declined just over 20% in the month of January, continuing an 18 month slide with oil prices that has reduced shares prices by more than two thirds for both halves of this one company.

So What: While Targa has been facing hard industry headwinds for the past couple of months, much of the talk about these two companies is the pending merger of the two. Back in November, the company announced that the general partner would buy out the remaining stake of the partnership. In the beginning, the deal looked a little off putting since the offer price was a little low and investors in the partnership wouldn't get any cash considerations to pay any tax consequences. Now with shares trading so low, though, the potential gains of being a single entity are looking to be more and more attractive. 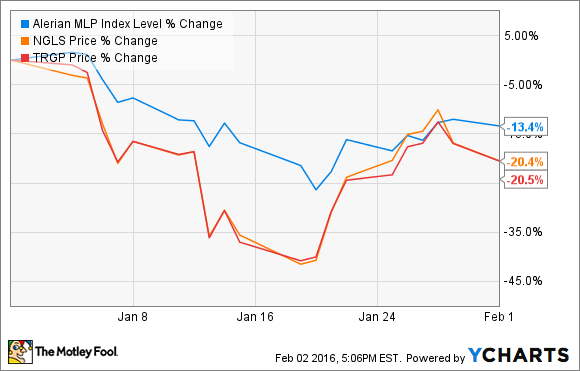 Targa Resource Partners was already struggling with the ability to grow its distribution before the deal was announced, and the continued decline in natural gas and natural gas liquids is just putting further strain on the company's ability to generate cash flows.

Now What: The consolidation move should help if it gets approved by shareholders, but even with approval of the deal the company could still be facing some serious questions about its dividend. Shares of Targa Resources Corp and Targa Resources Partners current sport dividend yields of 16.2% and 24%, respecively, and at that price the company can't raise equity and expect to make a return on its assets. Furthermore, the two companies are already carrying a less than ideal amount of debt. So unless we were to see a significant rise in oil, natural gas, and NGL prices -- which looks unlikely for 2016 -- chances are shares of Targa will be headed for a dividend cut.